Want to get involved? Become a Featured Expat and take our interview.
Become a Local Expert and contribute articles.
Get in touch today!
Filed: Interviews,Russia
Jasilyn is a blogger in her late 20s. She is currently living in Russia where she teaches English. She loves traveling and exploring her own city. Her favorite things to photograph are colorful buildings, graffiti, and abandoned places. She is working on becoming fluent in Spanish and Russian. Her blog is a collection of every day life told in photographs. Jasilyn's expat blog is called Coffee and Cleveland (see listing here) 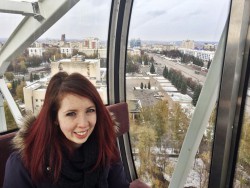 A photo of me on one of two Ferris wheels in the city.

Here's the interview with Jasilyn...

Where are you originally from?
I am from a suburb outside of Cleveland, Ohio, hence my blog name.

In which country and city are you living now?
Ufa, Russia

How long have you lived in Russia and how long are you planning to stay?
I have lived in Ufa for about 7 months (August 2015), and I plan to stay another 6 months to a year. 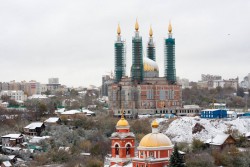 Church and mosque
Why did you move to Russia and what do you do?
I moved here because I had the opportunity to teach English. I actually taught ESL in public schools in the United States, but since I wasn't working full time I figured it was a great opportunity to try something new. I'm still gaining teaching experience which I can use whenever I return.

Did you bring family with you?
No, I came here by myself. I'm single and I don't have any children so it was easy for me to pack up and leave.

How did you find the transition to living in a foreign country?
Transitioning to life in Russia was hard only because of the language. If I had known Russian I don't think I would have felt so overwhelmed because I could read streets signs and talk to people. Living away from family for five years when I was attending college made the transition of living away from home easy. My work also helped me find somewhere to live. If I had done it completely alone I'm sure it would have been so much harder. It was hard the first two weeks being away from family, but I think it could have been worse. I also experienced some really bad culture shock about 2 months in but now I just feel like Russia is home.

Was it easy making friends and meeting people; do you mainly socialise with other expats?
It was easy making friends in Ufa because people here love showing their city and want an opportunity to practice their English. I also became friends with the expats that I work with, as well as a few other expats I randomly met in the city. 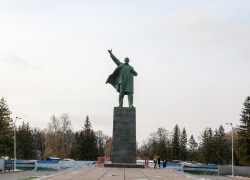 Lenin Square
What are the best things to do in the area; anything to recommend to future expats?
Honestly, Ufa isn't all that exciting, but you can get to Kazan and Moscow or St. Petersburg pretty easily and for a relatively cheap price. One thing about Russian culture I really like is that they LOVE to go for walks. There are so many parks around the city of differing sizes that people will walk around even in the winter! I like to take photos so I enjoy walking around the city and finding hidden gems. There is also a Bashkir and Tatar influence in the area because those are the largest ethnic groups here. Not only can you experience Russian food and culture, but you also get to experience some other ethnic cultures as well.

What do you enjoy most about living in Russia?
I love the food and learning a new language. I also like the city culture of being able to walk everywhere. I absolutely hate driving, but you don't really have an option living in the suburbs. It's also fun learning about Russian culture, like their holidays, and being able to share my culture as well.

How does the cost of living in Russia compare to home?
Living in Russia is so cheap! An apartment here costs about $250 a month with all utilities included. Food is extremely cheap as well. Unfortunately, with the Russian economy and foreign relations with other countries food prices have risen slightly and it's hard to find some things here like parmesan cheese. Although the cost of living is cheap, everything else like clothing and eating out in restaurants is really expensive because they are based on global prices which tend to be higher than the ruble. 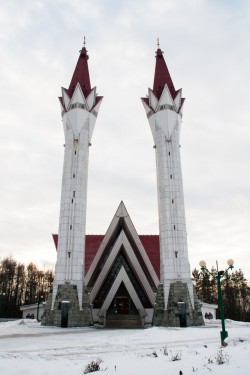 Lala Tulpan Mosque - Bashkortostan is a mix of Christian and Muslim religions
What negatives, if any, are there to living in Russia?
There are some negatives about living here, but I don't think they are enough to keep me away. One is the language. Russian is an extremely hard language to learn (as a native English speaker). I wouldn't say it's impossible but it's much different than English. For example, there aren't as many cognates with English as there would be with Spanish. Also, things don't translate as directly as Spanish which means you have to memorize phrases instead of basic grammar that you could translate directly from one language to the next. Another negative is that it's not America. I'm only saying this because I grew up in America (it's my homeland). I know how to live comfortably there, and it's my culture. I get homesick because I miss how easy it is living in America where I can just get in my car, drive to the store, and understand everything the cashier is saying. But I also feel so much safer living here than America, so that's a positive.

If you could pick one piece of advice to anyone moving to Russia, what would it be?
Learn the Russian alphabet before you come! I didn't know any Russian, but I made it a point to learn the alphabet. It helped tremendously when I have to sound out words on the street and it makes learning the language easier. It also feels good when you can read English words written in Cyrillic letters. It almost feels like you are that much closer to mastering the language (even when you aren't).

What has been the hardest aspect to your expat experience so far?
The hardest aspect is learning the language. Very few people here speak English and Russian is so much more complex than English. It's such a pain not being able to understand the cashier and needing someone's help at the bank. Even going out to a restaurant is a pain sometimes and I dread having to do anything where I think someone will ask me a question I won't know the answer to.

When you finally return home, how do you think you'll cope with repatriation?
I think repatriation will be fine for me. I think it will be a relief to understand everything, although my cousin who also lives abroad said that being bombarded with English will be overwhelming. 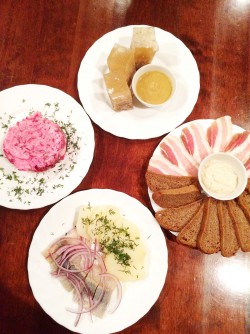 Various Russian cuisine I tried for the first time.
What are your top 5 expat tips for anyone following in your footsteps? Tell us a bit about your own expat blog.
Coffee + Cleveland started out as a blog about life as a student teacher but not it is just a lifestyle blog chronicling daily life in Russia and my travels abroad. I am trying to include more day to day experiences to give readers an understanding of life in Russia.

How can you be contacted for further advice to future expats coming to your area?
You can contact me through my blog and my e-mail address. I also have an Instagram of places that you can comment on if you are interested in seeing something I captured https://www.instagram.com/jasilynalbert/