While most John Lennon (and Beatles) songs became trite through parental overplay on childhood road trips across America, âImagineâ might just be the song to describe my current home of Hong Kong. 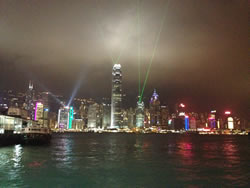 Like what youâve read about Hong Kong? Then âI hope some day youâll join us.â

Perhaps now I can finally banish that song -- listened to many times while stuffed in the backseat cruising across America -- from my mind.

Jen Brown is an American expat living in Hong Kong. Blog description: Observations of a Serial Expat. American. China. England. Hong Kong. Check out my comics and stories about expat life. Proud to be Freshly Pressed by Wordpress!
Help to win!

I really liked this article. As someone living in mainland China who visits Hong Kong frequently, it is awing to see the differences between the two cultures. I only hope that one day Hong Kong can get true independence and be it's own sovereign nation.

This is freaking awesome! It's true: There is no place in the world like Hong Kong. And mainlanders *are* pretty... ugh.