Home » Expat Articles » Opinion » The Character of Italians and Their Politics

The Character of Italians and Their Politics

Want to get involved? Become a Featured Expat and take our interview.
Become a Local Expert and contribute articles.
Get in touch today!
Filed: Opinion,Italy

Local Expert Series: The Character of Italians and Their Politics by Rick

âIn Italy for thirty years under the Borgias they had warfare, terror, murder and bloodshedâ¦BUT they produced Michelangelo, Leonardo da Vinci and the Renaissance. In Switzerland, they had brotherly love; they had five hundred years of democracy and peaceâ¦and what did that produce? The cuckoo clock.â â Orson Welles

The Art of Getting By

Iâve always liked that quote by Orson Welles because it sort of summarizes all the things that we foreigners appreciate about Italy. It affirms that we are willing to overlook the bad in order to enjoy the good. Or more accurately, it says that without the bad, all of the wonderful things that we adore about the Bel Paese probably wouldnât even exist. The struggle is necessary to inspire the art. Without repression and the âdeathâ of culture during the Middle Ages, there wouldnât have been the Renaissance; the rebirth. If food hadnât been so scarce among the poveri (the poor folks), then all of the sublime delights of Italian cuisine wouldnât have been invented (a world without pizza â gasp!). If Luigi had a decent job, then he wouldnât have to scavenge old refrigerator parts to repair his Vespa. And so on. I mention this often, itâs âlâarte dâarrangiarsiâ and it never ceases to amaze me. Italians are masters at finding creative solutions to the most intricate challenges, whether it is tyranny or motorbike transmissions. 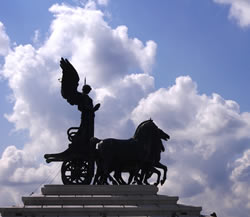 An important monument in Rome (the top of the Vittoriano)
This is what makes me optimistic about the long-term future of Italy. All the doomsayers on the blogosphere are lamenting about how devastated Italy will be 20 years down the road. Iâm not worried; I think Italy will be just fine. In the short term, yes, this most recent political mess will cause added havoc and more financial painâunfortunately Italy hasnât reached the rock bottom of this crisis just yet. But I predict that 20 years from now Italy will be poised to challenge Germany as the strongest economy in the E.U. I know that plenty of people will disagree with this prediction and they probably have pages of statistics and facts to back up their opinions. But Italy has seen worse than this. Italyâs most productive years of the 20th century were those immediately after the double-whammy of Fascism and World War II. The Renaissance flourished in the decades following the rule of the Borgias. (And when compared to the Borgias, even Berlusconi doesnât look so bad.) I realize that it sounds a bit naive, but I believe that this same spirit will come to the rescue once again. Never underestimate the ability of the Italian people to thrive in the face of adversity, even when that adversity comes from within.

A Sicilian friend once told me that when he was a young boy, his mother took him from his hometown of Catania to his grandfatherâs village in the province of Palermo on the other side of the island. He couldnât believe how strange those people were; they spoke in a funny dialect and ate terrible food. When he was a teenager he moved from Sicily to Tuscany where everybody thought that his accent was funny and suddenly he realized how much he had in common with those folks in Palermo after all. As a young adult, he took his first trip abroad to France where he knew almost nothing about the language or culture; which suddenly made him feel very isolated and alone. But then he met a girl from Milan and was relieved to talk to a person who spoke his language and totally understood his difficulties in adjusting to such an odd way of life. And when he went to visit some friends in America, he became aware of just how much he shared with the French, Spanish, and other European people. 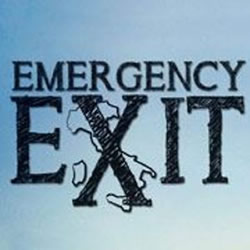 Emergency Exit Emergency Exit Documentary
The clichÃ©â says that when you ask an Italian where theyâre from they wonât say, âItaly,â instead theyâll say Rome (or more specifically, their rione), or Siena (or their contrada), or Verona, or Naples or wherever. I guess thatâs true to a pointâpeople still have a lot of pride in their hometown, which is great. These micro-cultures and local dialects should be cherished and preserved, in my opinion.

But in recent years, more and more young educated Italians are going abroad in search of career opportunities. (An excellent documentary about this phenomenon was recently made: http://www.emergencyexit.it/) And when they do, they begin to realize how rich and diverse their own country isâand how much they have in common with their fellow Italians, despite that great diversity. Things look different from afar. Maybe this is what is needed to finally unite Italy 150 years after Massimo dâAzeglio famously said, âWe have made Italy. Now we must make Italians.â

So my hope for Italy is this: let some of the best and brightest of the young minds out loose into the world so that they can learn a thing or two abroad while simultaneously showing the global community how incredibly creative and talented and motivated this generation of Italians is. Meanwhile, the people who stay at home need to keep struggling against the political status quo and let them know that their days are numbered. Iâm not a fan of Beppe Grilloâs politics, but if he has shown us something positive itâs that Italians are ready for drastic change. (By the way, has anyone seen these men currently in the Italian senate? Theyâre all like 100 years old. I donât think it will require much patience to wait for these dinosaurs to die off and become extinct once and for all.)

And when all of these factors eventually come together, who knows, maybe we will get to witness the next Italian Renaissance.

Rick is an American expat living in the Caput Mundi. A few years ago he came to Italy on an extended vacation (we could call it a âsabbaticalâ just to make it sound impressive, but letâs be honest...). About midway through the trip, chance landed him in Rome where he fell in love with the city on the very first night. On the second night, he fell in love with one of its citizens (who is now his wife). A few weeks later he returned to the US, settled his affairs, applied for a visa, and then came back to Rome to live permanently. He has never regretted a moment of it. For work, he is teaching the world English - one Roman at a time. He also writes a blog called Rick's Rome.