Meeting Expats in Greece - Lonely? You donât have to be

Want to get involved? Become a Featured Expat and take our interview.
Become a Local Expert and contribute articles.
Get in touch today!
Filed: Meeting Expats,Greece
Itâs hard when you initially move to a new country. It was particularly hard for me because I spent my first year in Greece in a small inland town. Whilst I enjoyed the experience, I was the only foreigner so I had to integrate, or be incredibly lonely. I didnât get to mix with expatsâ¦and initially that suited me fine: nothing like being thrown into the deep end of a culture by living in a place where not many speak your language. 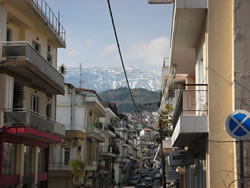 The Village - my first year in Greece. Beautiful yes, but it can get lonely.
After a second year in Athens I met more of a mixture of people through work: Greek Americans, Greeks, English. In Greece Iâve been lucky: the expats Iâve met have been keen to mix into the local community and have many Greek friends. Iâm into my fifth year in Greece now and have a wide mixture of expat and Greek friends. But how did I meet them? As I say, initially itâs not always easy and if youâre not careful, you can become isolated.

Thereâs no doubt itâs easier if youâre living in a bigger town or city, as youâve more chance of meeting other people through work or online community groups. For example, when I lived in the village I started to come to Athens on weekends and signed up to Couchsurfing. I met people and stayed with them on a Saturday night, met people through them and this was a great introduction to being shown around Athens by local people. I am still in touch with a few of them now.

When I knew Iâd be staying in Greece more permanently (my choice: Iâd fallen in love with the country and culture), I knew I couldnât rely on just hanging out with people from workâ¦I wanted a separate life as well. I also wanted to adopt a cat. A Google search for âstray cat charities in Athensâ directed me to Nine Lives, a charity that catches, neuters and releases stray cats, fosters and re-homes them as well as regular feeding programmes around the capital. One sunny Thursday morning, after making arrangements I took myself off to Syntagma (Parliament) Square Gardens and met one of the founders, also an expatriate married to a Greek. Off we trotted to feed the cats. Read more about that story here. And so I became involved in charity work for them: fundraisers, events and bazaars where I met yet more expats and a few more Greeks (it seems the expat community are more aware of the plight of animal welfare).

Ironically, my site has also helped me meet other expats (and more Greeks).
Initially I started âLeaving Cairoâ¦â as a one stop place for my friends and family to follow my adventures abroad. As I posted tales about visiting islands, observations about Greek culture and developed it further, I found myself receiving comments and emails from expats in Greece saying they loved my site, were coming to Greece for a year or two and would love to meet for coffee. And so my friendship circle grew (and theirs did too). Meeting Greeks through my site has been great as I sourced out more little business/cafes and interesting out of the ordinary tales to featureâ¦and Greeks were more than happy to have their business featured, for example: Chrysa of cafe Mon Cheri loved my write up of her little coffee shop and has become a good friend. Plus, itâs nice to get a free coffee from time to time!

How else can you meet expats? Facebook is a great way. I belong to a Group for Expat Women in Athens and get to hear about events, meet ups and not necessarily just expat meet ups. You see, even though I fit the dictionary definition of an expat: âSomeone who withdraws oneself from residence in oneâs native country,â I donât want to just mix with other expats. Whatâs the point of living in a country to just mix with my own nationality? Even if itâs not your choice to be here, as shown in my post, there are so many ways to meet other people and through them, to meet locals and find out about whatâs going on locally. Make the most of living in a foreign culture: start a blog and see how many followers you get; search of other expats blogging in your area, comment on their site and arrange to meetâ¦we bloggers love getting feedback and meeting fans! Find a cause youâre interested in and thereâs bound to be a charity run that you can get involved in. Youâll be surprised at the opportunities open to you, so long as you open yourself up to them. This advice doesnât just apply to living in Greece, it can apply to wherever you live.

I hope Iâve helped you with ideas to make the most out of your expat experience abroad.

Bex (Rebecca Hall) is a British expat living in Greece. Blog description: An unconventional British gal with a degree in International Relations, the wrong side of 35 who finds herself living in the unconventional country of Greece.