Speaking the Greek Language as a British Expat in Cyprus

Want to get involved? Become a Featured Expat and take our interview.
Become a Local Expert and contribute articles.
Get in touch today!
Filed: Speaking and Language,Cyprus
It has taken me longer than anticipated to get on down with writing for the Local Expert Series here on Expats Blog. Finally I made it and I thought the best place to start was with language.

I moved to Nicosia, Cyprus in October 2010. I started working in January 2011 and the rest is history so to speak. Over the nearly three years I have lived here, I have developed some sort of Greek language skills, but probably not through the most conventional methods. Unless you count standing in the supermarket reading food labels conventional. 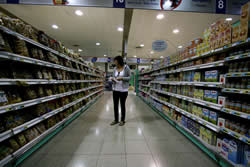 To be honest I never had a brain for languages. And the single most nerve-racking part of moving to Cyprus was my lack of Greek. To be fair to the Cypriots, their English is very good. But I guess the whole point of moving to another country is to immerse yourself in a different way of life and with that, usually comes a different language. So while I may not be the best person to give advice about learning Greek, I do have some useful information, I promise.

I have never had any official Greek lessons. However I have worked for a local company for nearly three years and this in itself has taught me a lot. Working in an office everyday, being surrounded by Greek speakers has allowed my brain to get used to Greek on an everyday level rather than just in the classroom. After just a few weeks I notice I began to recognise words I heard regularly; and with the help of a little English-Greek dictionary I began to associate meanings with the words I was hearing.

I would totally recommend putting yourself in situations where the language is spoken freely around you. With the help of a dictionary (or even Google translate) you will soon pick up short sentences and phrases that can used on an everyday basis.

I know you thought I was joking about the reading food labels in the supermarket, but actually I think utilising everyday things that are familiar to you, with a foreign language helps your brain make associations between written words and their meaning.

Greek is a particularly difficult language to learn because of the different alphabet utilised. The first and rather important step for me, was learning character by character, to understand the specific style of the letter and the sound. If you can learn the characters and the sound each one has, it will be easier for you to start pronouncing words properly.

Obviously, all of the above will work a whole lot better if you attend some classes also. The University of Cyprus School of Modern Greek, in Nicosia, offers Greek classes for non-native speakers and foreigners. More information about the classes, application and fees can be found here (http://www.ucy.ac.cy/goto/mogr/en-US/GeneralInformation.aspx). There are several government schemes to help foreigners learn Greek (http://www.euraxess.org.cy/services_incoming_practical_info_7.shtm) and the Adult Education Centre, part of the Ministry of Education and Culture offers courses across many towns in Cyprus, not just Nicosia.

If you think group lessons will not work for you, there are many private teachers who give lessons on an hourly basis and offer more customised language courses. You can find lots of private language schools offering lessons across Cyprus, through the Angloinfo website (http://cyprus.angloinfo.com/af/311/cyprus-language-schools-and-courses.html).
And if all else fails, try. I have been incredibly shy about speaking Greek in fear of doing it wrong. But the fact that your tried wont go unnoticed!

Mimi Finerty is a British expat living in United Arab Emirates. Blog description: The life and loves of an expat now living in Dubai, have relocated from Cyprus. From food to fashion, photography, design, art, culture, lifestyle and the weather.

Many thanks Mimi! Great start to your LES contribs :)