Want to get involved? Become a Featured Expat and take our interview.
Become a Local Expert and contribute articles.
Get in touch today!
Filed: Interviews,France
Diane a dog lover, fitness enthusiast, world traveler and Francophile! She's also a newlywed living in France with her husband, Tom, and gorgeous Cavalier King Charles spaniel, Dagny. Although Dagny was the inspiration for her blog 'Oui In France' (see listing here) because sheâs such a huge part of her life, youâll find a little bit of everything there including info on France, our travel adventures and dog topics. Diane's not sure how long theyâll stay in France or whatâs next, but her blog has come to life as an outlet for wherever life takes them. 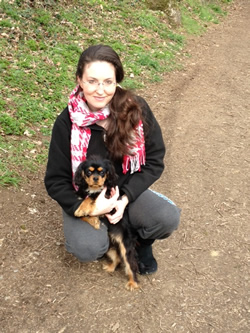 Here's the interview with Diane...

Where are you originally from?
Iâm from New Jersey originally and was living and working in New York City before moving to France.

In which country and city are you living now?
I live in the Loire Valley outside of Angers, France.

How long have you lived here and how long are you planning to stay?
I officially moved here just after Christmas 2011. We donât have any definite plans at this time to move back to the US or to stay in France. Itâs a little up in the air at the moment. As long as Iâm with my husband and dog, I think Iâd be happy anywhere.

Why did you move and what do you do?
I married a Frenchman! Iâd always had a love for France and when the opportunity to move came up, I jumped at the chance. As a freelance writer and copy editor, my job is mobile, so it was much easier for me to pick up and move than for my husband. 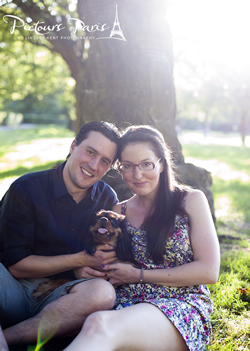 So was it your life goal to marry a Frenchman and move to France?
NOPE! Before moving and pursuing freelance work, I worked on Wall Street and never imagined Iâd meet Tom, get married or be here now. Itâs funny to see where life takes you sometimes when youâre open to it. This definitely wasnât a master plan I had, but Iâm so happy to be where I am now and wouldnât have it any other way.

Did you bring family with you?
Nope. We got Dagny, our Cavalier King Charles spaniel, on my birthday last year in France.

How did you find the transition to living in a foreign country?
Thereâs so much to say on this one. You have to go into the experience with an open mind and accept that things wonât always be easy. When things are rough and you have a bad day, get angry, get it out, and then get over it because holding on to the negative experience wonât help anything. I try to laugh about the ridiculous things here and put them in perspective. I have my limbs, I have a family and I have a roof over my head so are things that bad? Maybe in the moment they are, but once you step back, I realize that whatever I thought was a big deal probably was not. Also, I want to point out that the decision to move here was my choice. So many times, people move abroad as a trailing spouse or because of a choice that was not their own and I think that plays into oneâs overall happiness abroad. Are you there because you want to be there or because you had to go? I approached my move with a level head and a positive mindset and I think thatâs served me well.

Was it easy making friends and meeting people; do you mainly socialize with other expats?
Ha, no on all counts. I donât live in a big city at all and because I work from home, I donât meet French people. Our neighbors are all retired folks. I have to say that in general, French people arenât super open to making new friends, especially foreign ones with accents. Itâs hard to say. Maybe weâll move in the future to an area thatâs more suited for the under 60 crew. I know a few other expats, mainly through their blogs, but I definitely donât have a big French social life. I think thatâll be a New Yearâs resolution this year.

What are the best things to do in the area; anything to recommend to future expats?
The Loire Valley is great for wine tours. I love Le Tasting Room (letastingroom.com) outside of Angers. Cathy and Nigel do a great tour (easy access via the TGV from Paris) and will teach you all about the regionâs wines. Even just driving around on your own to Saumur and the surrounding areas is a lot of fun if youâre into wine. There are also a bunch of beautiful castles in the Loire Valley to explore. And itâs easy to get to Bretagne from where we live, a place I love. 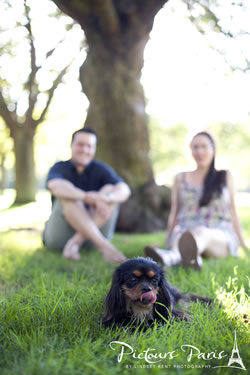 What do you enjoy most about living here?
There are so many positives about living in France. I love that healthcare is affordable, as are medicines. I love the quaintness of all the little shops (cheese shop, bread shop, pharmacies, etc.) and the French culture. Slowing down to eat, enjoying your dessert, relaxing on Sundays and other things like that that you wouldnât find in New York City. The food here is fantastic (even just the quality of regular chicken at the grocery store) and I enjoy spending Saturday morning at the marche. Most of all, I love that my husband is from France and that Iâm experiencing his culture first-hand.

How does the cost of living compare to home?
Right now, the euro is about US$1.30, so itâs not horribly high. In general, things cost more in France, like gas, tolls and food. But it does balance out when you look at the big picture. For example, vet bills are much cheaper in France as are medicines. You just have to pick and choose what you want to spend your money on.

What negatives, if any, are there to living here?
Life in France is an adjustment and if you donât know French or only know a little, itâs not going to be easy. Also, if you arenât here because you want to be here, Iâm sure it can be lonely. Certain things as mentioned above are more expensive. And as with anywhere, you miss your friends and family from home.

If you could pick one piece of advice to anyone moving here, what would it be?
Iâd tell someone considering a move to France to really look at the reasons why you want to move and make sure youâre doing it for you. Not some idealized version of what France should be. Once the vacation mindset wears off, the reality is that France has its problems just like anywhere else.

What has been the hardest aspect to your expat experience so far?
I have a really supportive husband so I canât say any single aspect has been really difficult. Dealing with the hurdles of the French bureaucracy is a nightmare. Everything takes forever. Sometimes I think the language can be difficult as well. Even though I speak French, Iâll never be treated like a native speaker.

What are your top 5 expat tips for anyone following in your footsteps?
1. Do your research.
2. Learn the language to at least a conversational level.
3. Save as much money as you can and if you want to work, find a job BEFORE moving.
4. Be realistic about what living in France entails.
5. Remember to enjoy yourself! Put things in perspective when youâre having an off day.

Tell us a bit about your own expat blog.
My blog, Oui In France, was a project I started earlier this year to chronicle my life in France including our travels, expat stories, info on the French culture, my dog and everything else. Itâs an outlet for me and serves as a way to connect with those back home. Iâm so happy itâs been well-received!

How can you be contacted for further advice to future expats coming to your area?
Through my blog: http://ouiinfrance.com/contact/

Diane's expat blog is called Oui In France http://ouiinfrance.com which is very worthy of a visit. Diane can be found on Twitter @DagsDiTom or on her Facebook profile. Diane's expat blog has an ExpatsBlog.com listing here which has some great reviews already, although would appreciate a nice review if you can spare a quick moment! If you liked this interview with Diane, please also add a quick comment below.

Great interview! I love Diane's blog, it's very well-done and has lots of great info on France. I'm actually moving to Paris later today so I will keep this list in mind!

This is great! I always love checking out Diane's blog. She has such a fun voice and treats her subjects with such enthusiasm! As a huge French fan, her blog is definitely one of my guilty pleasures :)

I myself have fallen in love with a frenchy and moved to France. I can relate so much to this story!

Diane's blog is great and extremely well-written. I've learned so much about life in France from her blog, that I don't think I ever would have learned through a travel site.