Want to get involved? Become a Featured Expat and take our interview.
Become a Local Expert and contribute articles.
Get in touch today!
Filed: Interviews,China
Kirsten Jacobsen, a few months after graduating university and getting settled into a job at the local newspaper, decided it was probably a good idea to move to China for a while. (She didn't speak Mandarin or know anything about the place other than what she'd studied in political science classes.) This was a pre-meditated move, but spontaneous nonetheless; after persuading the Des Moines Register to keep her on as a freelance correspondent and securing a job as an English teacher in a rural Chinese high school, she hopped on a plane and have been on a whirlwind of an adventure ever since! 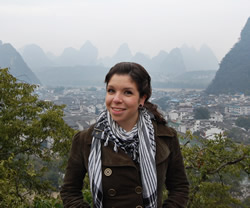 Here's the interview with Kirsten...

In which country and city are you living now?
I currently reside in the southern district of Middle of Nowhere, China. (Also known as Yongzhou, Hunan province.)

How long have you lived here and how long are you planning to stay?
I've lived here in Yongzhou for eight months now, and I plan to stay in China for at least three more. (I've blossomed into a mostly love/rarely hate relationship with the rural parts of the Middle Kingdom, so the thought of moving is dispiriting.)

Why did you move and what do you do?
Initially, I relocated to Yongzhou to teach English at a public high school here (one of those "broadening horizons"-type things). Before leaving Des Moines and my job at the state newspaper, however, I pitched my story to the editors, who kindly allowed me to act as a freelance correspondent from China. I now write a monthly article on life in the Middle Kingdom as an Iowan expat, and I regularly blog about political and social issues in the country. 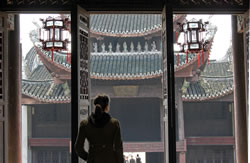 Did you bring family with you?
Surprisingly, my family opted to stay in Iowa. I did manage to coerce my boyfriend into coming with me, though, and we are both English teachers at the same high school.

How did you find the transition to living in a foreign country?
From the extreme creature comforts of urban America, coming to live in rural China is like crashing into a brick wall - but only for the first month or so. (I recall an overwhelming desire to buy a return ticket my first night here.) By now, navigating the transportation systems and language barriers is less of a shot in the dark; everything is learned the hard way! When I visited a few Southeast Asian countries this summer, I was surprised at how much easier just "getting by" was than in China, so I've come to appreciate the little successes in daily life: When the grocery stores carry real "coffee," when people understand my mangled Mandarin, when I get on the right bus! However, for all the initial shock, coming to a small city (population: 5.6 million) has actually been something of a life-saver. After eight months here, I'm starting to feel like part of the community. A lot of that has to do with the almost Iowan-esque kindness of people in Yongzhou!

Was it easy making friends and meeting people; do you mainly socialise with other expats?
Every friend I've made here has been hard work, and there certainly aren't many other expats to socialize with! There are only two other foreign teachers in a 30 kilometer radius (both at this same school), so we've become quite the close-knit group. As for making friends, the vast majority of new acquaintances are students. (One important thing to remember about China is that speaking English was widely prohibited until post-Cultural Revolution, so everyone I am able to hold a conversation with is under age 30! Even then, English has only become mandatory/in vogue in the last 20-some years.) There's definitely a feeling of isolation - and occasionally, exasperation - but that's what comes with the territory. Writing for the paper and my blog help counteract the lack of socializing. 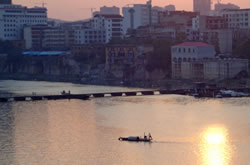 What are the best things to do in the area; anything to recommend to future expats?
Yongzhou has never warranted so much as a mention in the expansive Lonely Planet "China" guidebook, but that's not to say there's nothing to do here! (Though we're also lucky to be just a three-hour train ride from the popular Western backpacker hang-out of Yangshuo to the south and Hunan's provincial capital, Changsha, to the north.) In Qiyang County, the famous Wuxi Forest of Steles is home to countless ancient stone monuments inlaid with delicate, ancient calligraphy and timeless written works. Further south in Jianghua County lies Jiuyi Mountain, a popular weekend trip for locals, and is home to a large population of ethnic minority Yao people. Hunan province itself is home to the breath-taking ZhangJiaJie National Park in the northwest, the ancient river city of Fenghuang in the central west, incredible food everywhere, and plenty of sites commemorating the birthplace of Chairman Mao Zedong.

What do you enjoy most about living here?
The randomness! Living and working in Des Moines, there were never surprises (save for the occasional snow day in winter). Here, however, nothing ever goes as planned: I'll show up for class and be told it's suddenly a school holiday; I'll go downtown and find a marching band parading down the sidewalk, in between motorbikes and grandparents with toddlers in tow; I'll discover too late that the bus driver has decided on a whim to change his route. Once, at our favorite restaurant in town, one of my fellow foreign teachers ordered a bamboo basket full of dumplings and was brought a complimentary cup of toad soup too, apparently the dish du jour. Of course, you can't turn down a random token of thanks like that!

How does the cost of living compare to home?
Essentially, in Yongzhou there is no cost of living, prices are that negligible in comparison to home. If I were to really skrimp, I figure I could live on $170 USD per month (considering housing is provided by the school). A bowl of noodles on the sidewalk will set you back Â¥3 RMB (about $0.48), and a bottle of beer is the same. Going to a fancy coffee shop (read: place with mock Western food) or the movie theatre can often be the biggest expenditures, costing about Â¥50 RMB ($7.94) and Â¥63 RMB ($10), respectively. It's important to note, though, that while the cost of living is next to nil, my salary as a high school teacher is also pretty inconsequential compared to similar pay in the U.S.

What negatives, if any, are there to living here?
There are times when I miss speaking English at a native speaker's pace to someone besides my two fellow foreign teachers. And there are always the cravings for anything that's not rice and tofu (it's not easy being a vegetarian in meat-loving Hunan province!). Other than that, I would posit that the only negatives to living here are the same anywhere else - 5-day work-weeks when you'd rather be traveling, trying to go for a run when the air is full of smog, finding a 7-inch centipede biting into your foot. 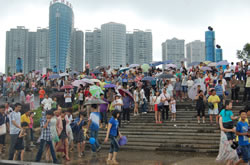 If you could pick one piece of advice to anyone moving here, what would it be?
Come with a basic knowledge of Mandarin! So far, the language barrier has been the biggest hurdle. Eight months later and I'm finally making gains in that department, but the learning curve is steep!

What has been the hardest aspect to your expat experience so far?
The hardest aspect of the adventure thus far is, again, probably the language barrier. The U.S. Department of State lists Mandarin Chinese as one the hardest languages for native English speakers to pick up, and it's true in reverse. Therefore, ordering food, taking a taxi anywhere, asking the time or directions, or trying to hold a conversation with anyone has been virtually impossible. (Think a lot of gesturing and mumbling the Chinese for "I don't understand" like an imbecile.) I'm finally improving, though, day by day.

When you finally return home, how do you think you'll cope with repatriation?
"When" I finally return home is still an "if" at this point in time. I enjoy China, but I'm hoping to nab a job as a legitimate foreign correspondent come the end of the semester!

What are your top 5 expat tips for anyone following in your footsteps?
1 - Don't fall into a rut. You can visit the same safe places and do the same comfortable things day after day, but then you miss out on all the new experiences you can only have in your newly adopted home!
2 - Inversely, don't overdo it. Sometimes it's necessary to chill out and refuel. "Sensory overload" can be something of an understatement after a week of teaching more than 1,400 students and then visiting the crowded Sunday markets.
3 - You're a member of the community, but also a representative of your home country. This means that - if, like me, you're one of two Americans in the entire city - you are up against a palisade of pre-conceived notions and both positive and negative stereotypes. Don't do anything that might make you "lose face," to quote the Chinese line of thinking.
4 - This should be obvious, but come prepared for anything. That means finding out which immunizations you'll need ahead of time, bringing any medicines you may not be able to get, investing in a phrasebook, lugging along any and all documentation you could ever possibly need, and finding out from others what "little things" they wish they'd brought. (In my case, those are books in English and anti-malarial pills!)
5 -Learn about cultural and societal norms ahead of time, if possible. This makes "culture shock" more of a non-issue when you arrive, and you're less likely to be offended or do anything wildly taboo. (I recommend reading "The Spirit Catches You and You Fall Down" by Anne Fadiman regardless of your new homeland of choice!) 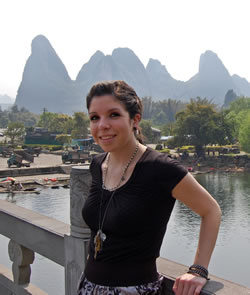 Tell us a bit about your own expat blog.
Because I am working in conjunction with the Des Moines Register, there are certain freedoms and restrictions I am faced with when blogging. On the more positive side, I get to mix my own personal anecdotes and opinions with facts when reporting on something, to show the more human side of the story. On the other hand, I also have to be very careful what I write, since anything reflecting poorly on the Register will be traced back to me. However, I've been lucky that I'm given free reign with the subject matter; I get to cover everything from Chinese-American political tensions to myths about this "communist" country to the strange things I've found at KFC China.

How can you be contacted for further advice to future expats coming to your area?
I can be found on Facebook (Kirsten Jacobsen), QQ (2354608753), and reached via email at kamjacobsen{at}gmail-dot-com.

Kirsten authors her expat blog on the Des Moines Register which can be visited here and is well worth a visit. If you liked this interview with Kirsten, please do add a quick comment below.

Enjoyed your interview. You are very brave!