Want to get involved? Become a Featured Expat and take our interview.
Become a Local Expert and contribute articles.
Get in touch today!
Filed: Interviews,India
Ben Soltoff is a recent college graduate from the U.S. who currently lives in Jodhpur, India. When heâs not working on rural development in the worldâs most densely populated desert ecosystem, heâs traveling around the subcontinent, having adventures and stumbling into awkward situations. Growing up, his most exotic international journey was a slightly traumatic day trip to Tijuana from his Grandmaâs house in San Diego. Many years later, while studying abroad in South Africa, he developed an insatiable desire to see the world. He jumped at the chance to work in India, and now he puts his thoughtful and slightly sarcastic insights into a blog called Marwarology (see listing here) Here's the interview with Ben...

Where are you originally from?
I was born and raised in Boston, Massachusetts, but more recently, I lived in Durham, North Carolina.

In which country and city are you living now?
Iâm living in Jodhpur, Rajasthan, India.

How long have you lived here and how long are you planning to stay?
My time as an expatriate (letâs call it my expatriatism) is shorter and more defined than many of the others on this site. Iâve lived in Jodhpur for almost four months, and Iâm planning to stay for another six months.

Why did you move and what do you do?
Last year, while doing some research in South Africa, I got this inexplicable feeling that my next international destination should be India. I didnât know how or when, but I knew I had to go. Then I heard about a fellowship through my university where after graduation, they would send me abroad for ten months to work for an NGO. I told them I wanted to go to India, and a few months later, I was boarding a plane. Now Iâm working for a local organization that does community-based rural development. Day to day, I alternate between conducting research on climate change, managing online communications, and writing English-language reports.

Did you bring family with you?
Nope, just me. 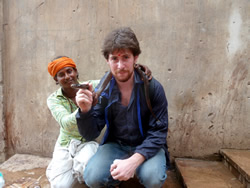 How did you find the transition to living in a foreign country?
The transition hasnât been easy. Iâm used to adapting to new places and cultures, but India is a different story. The country functions on an entirely separate plane of existence from the rest of the worldâeven the time zone is half an hour out of sync. I canât say I fully get this place, but little by little, Iâm learning how to get by.

Was it easy making friends and meeting people; do you mainly socialise with other expats?
Jodhpurâs a small city, so thereâs not much of an expatriate community. Itâs tough to find people to socialize with. This has its pros and cons. The downside is that Iâm often forced to venture out on my own, learning through trial and error, with an emphasis on the error. But the upside is that Iâve cultivated many relationships with local people. Almost everyone Iâve met in India has been astoundingly nice. Itâs fairly common for strangers to invite me into their homes for chai. This can result in awkwardly sitting around and trying to communicate, but itâs worth the effort. I now have several good friends whom I originally met as strangers on the street.

What are the best things to do in the area; anything to recommend to future expats?
As I mentioned before, Jodhpur isnât very big. Tourists often breeze through the three main attractionsâthe fort, the palace, and the mausoleumâin a single day. Those things are definitely worth seeing, but my favorite activity is just roaming the old city. With its bustling markets, winding streets, and stunning architecture, Jodhpurâs old city is the best in Rajasthan. Other fun activities include hiking around the fort and taking weekend trips to nearby cities. See âBenâs Guide to Jodhpurâ on the blog for more ideas on stuff to do:
http://marwarology.wordpress.com/bens-guide-to-jodhpur/ 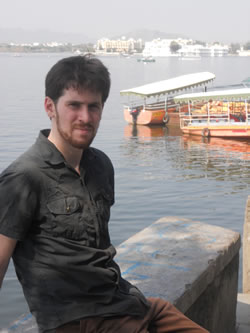 What do you enjoy most about living here?
I enjoy how different it is. Every day, I learn something new about Indian culture and history. When I was in the States, I often fell into a routine and then stopped challenging myself. That hasnât happened here. I also enjoy the friendliness and openness of the people, the cheap and convenient railway system, and the fantastic Indian food.

How does the cost of living compare to home?
The price of almost everything is much lower than in the U.S.âfive to ten times lower in some cases. For instance, Iâve never spent more than ten American dollars on a meal. Three to five dollars will usually cut it, even at a nice restaurant. A few things are still fairly expensive, like gasoline, alcohol, and for some reason, Diet Coke. The cheapest thing compared to the States is a haircut. It costs the equivalent of 60 cents here, while it would be 15 dollars in the States. Itâs probably because wages are so much lower. Now I understand why companies outsource.

What negatives, if any, are there to living here?
Everything I mentioned as a positive is also a negative. The cultural differences stack up until theyâre overwhelming. The people are so open that they occasionally have no regard for privacy. The trains smell, and transvestite beggars invade your personal space. The food is good only if itâs Indian food.
Also, the country is very dirty. Many people just leave their trash anywhere, and they relieve themselves wherever they want. Iâve seen some very disturbing things on the side of the road, things I hope never to see again. 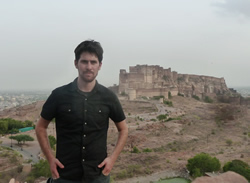 If you could pick one piece of advice to anyone moving here, what would it be?
Have patience, and keep an open mind. If you expect to live the same sort of lifestyle you lived in your home country, then youâre going to be disappointed. This applies to any experience abroad, but itâs especially true in India. Lots of things are frustrating, like interacting with Indian bureaucracy, but you just need to take deep breath and accept the situation. It helps to have a sense of humor. What seems like a travesty will probably make a funny story for your friends back home. Itâs best to realize that as soon as possible, ideally within a few seconds.

What has been the hardest aspect to your expat experience so far?
The toughest part has been the language barrier. People speak English well enough for me to get what I need, but anything more than that is complicated. Even though Iâm taking Hindi lessons six days a week, Iâm still very much a beginner. Just asking for directions can be a challenge. And the language barrier widens the cultural gap. Because I donât speak Hindi, I canât ask people why theyâre doing what theyâre doing, and they canât explain it to me. This leads to constant confusion and ambiguity, which gets tiring.

When you finally return home, how do you think you'll cope with repatriation?
Iâll probably be torn when I get back. Part of me will enjoy the clean surroundings and the familiar culture, but another part of me will miss the vibrant color and activity of India. Things in the States might be a little too neat and tidy. And after Iâve had the foods and experiences Iâve been craving, the appeal will wear off. But beyond the superficial stuff, Iâm looking forward to seeing my friends and family again. 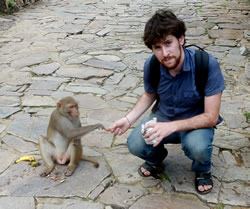 
Tell us a bit about your own expat blog.
Marwarology combines anecdotes about my life with descriptions of social issues facing India. In my posts, I cover subjects ranging from power outages to strange museums to wild boars. Each post filters everything Iâve experienced into a coherent and engaging story. This gives me the comfortable illusion that things make sense. I also try to add flashes of humor, because being a foreigner in India is an inherently funny situation. Either that, or Iâm slowly going insane. Maybe both.

How can you be contacted for further advice to future expats coming to your area?
Write a comment on the blog, or send an email to marwarology{at}gmail{dot}com. Iâm always happy to share my views on India or anything else.

Ben blogs at http://marwarology.wordpress.com which we recommend a quick visit if you haven't been already. Marwarology has an ExpatsBlog.com listing here so add a review if you like! If you appreciated this interview with Ben, please also drop him a quick comment below.

thank you ben 4 sharing india with us, i am looking 4 a country to live in where i dont have to be ashamed to to be a part of .... the US is getting worse every day A PROUD AMERICAN IS AN IGNORANT AMERICAN would be my bumper sticker, i am looking looking for a place to live where the golden rule is not is not just a joke.....Love is the only law in the REAL world....later josh

Was wrote 9 years ago:

Great piece. Really sums up both sides of life in a different culture. I've read the blog and it is, indeed, a thoughtful, humorous capsule of different experiences he's having as an expat.