US Expat Living In France - Interview With Ella Coquine

Want to get involved? Become a Featured Expat and take our interview.
Become a Local Expert and contribute articles.
Get in touch today!
Filed: Interviews,France
Lisa (aka Ella Coquine) moves to Paris alone, falls in love, restarts her lifeâ¦and then gets dumped! Ella Coquine and her Tales from the Chambre de Bonne (see listing here) follow the journey of an Italian-New Yorker who has dated her way through Paris, and is finally making it her home. Once an anonymous blog created by author Lisa Czarina, she shares her love of French culture, men, and wine, her many French dating experiences, and her life in Paris as a bull in a china shop. Lisa also writes for Girlâs Guide to Paris, and has contributed to Broke Girlâs Guide and Hello Giggles! 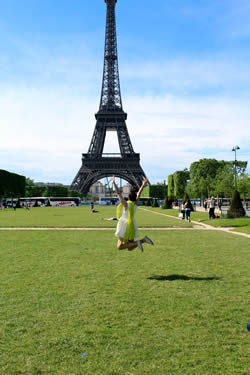 Here's the interview with Lisa...

Where are you originally from?
I was born and raised in Manhattan, and moved out to Long Island in Junior High. Iâm extremely proud of where Iâm from. Yes, even the Long Island part!

In which country and city are you living now?
Paris, France.

How long have you lived here and how long are you planning to stay?
Iâve been here for 3 years and will most likely stay indefinitely.

Why did you move and what do you do?
I guess you could say that I moved here on a whim. I quit my fashion job in New York, and with three suitcases, my life savings and a dream, I arrived at Charles de Gaulle airport in 2009.

Did you bring family with you?
No, but my mother is a flight attendant who has frequent trips to Paris. She plays a reoccurring role as a guest star Parisienne, as she is here twice a month. 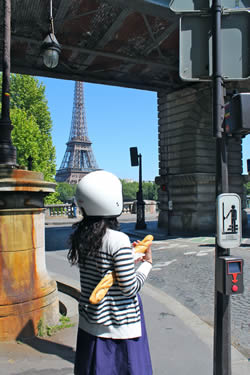 Was it easy making friends and meeting people; do you mainly socialise with other expats?
Making true friends (French of expat) was probably the biggest challenge I faced after moving to another country at the age of 28. I had mistaken friendship for mere drinking buddies, and ended up getting burned when I realized that I didnât have actual real friends here. I now have a very small group of friends, (both French and American), that I met during different stages of my âFrench lifeâ. Itâs quality, not quantity.

What are the best things to do in the area; anything to recommend to future expats?
This is going to sound a little goth, and please believe me when I say that I donât have a black tear drop tattoo on my face, but one of my favorite things to do in Paris is to walk through the cemeteries. I guess because I live near one with a fantastic view of the city, I find myself there more often than I not, had I lived elsewhere. Iâve done some of my best writing on a park bench in a Parisian cemetery. You still totally think Iâm goth.

What do you enjoy most about living here?
I love speaking the language, as well making fun of my many mistakes - especially with my future in-laws. I provide them and myself with endless entertainment with my many blunders. 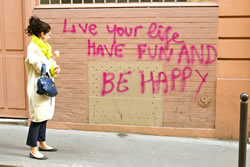 How does the cost of living compare to home?
Itâs hard to say because I was making more money in New York and in Paris Iâm a (proud!) broke English teacher. I find the cost of rent to still be lower than New York rents; because at least in Paris, living in the actual city is still affordable for someone with a modest income. In New York? Forget about it! (Spoken like a true New Yorker!) I had no choice but to live in Brooklyn, and I still paid a pretty penny!

What negatives, if any, are there to living here?
I miss New York style delis where you have to shout at the top of your lungs over a high counter, over the loud radio, as well as over other frantic customers just to place an order. Youâre essentially having a screaming match just to get a chicken parmesan hero. I love New Yorkers.

If you could pick one piece of advice to anyone moving here, what would it be?
Donât beat yourself over the language. With patience and practice, itâll come! What has been the hardest aspect to your expat experience so far?
After getting dumped by the man I was living with, I was left without a place to live, without friends and my savings dwindling down where I was in the red. In two weeks, I found a tiny apartment (a chambre de bonne), an odd job filing in an American tax office, and had to restart my life again - alone. These six months of solitude after already establishing life were long, quiet and difficult. This time was necessary for growth, and I am now grateful for this experience.

When you finally return home, how do you think you'll cope with repatriation?
Iâm getting married in May to a French guy (not the one who dumped me!), so I foresee myself as a grandmother pulling my grocery wagon behind me, down these tiny rues. I plan on wearing a beret. A red one. By that point, I think Iâd have paid my Parisian dues where Iâm allowed to cheese it up a little. 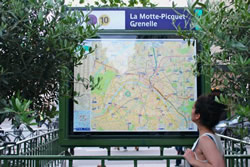 
Tell us a bit about your own expat blog.
My blog started off as an anonymous diary (hence the Ella Coquine bit!), counting days after the break-up. Each day, I had to focus on the positive in order to move on from this painful experience in Paris. The blog has now steered in a different direction, and I sound off about comparisons between dating in the States and in Paris, my experiences with Frenchmen, dating horror stories, and share funny tidbits of how still after 3 years Iâm still a foreigner who is learning new things. I also have incredible readers who share their stories in the comment section, turning the blog into an open forum for others to share their experiences. The best part of the blog, in my opinion!

How can you be contacted for further advice to future expats coming to your area?
ellacoquine{at}gmail{dot}com

Lisa blogs at http://www.ellacoquine.com/ which we recommend a quick visit if you haven't been already. Lisa recently had an article published by Huffington Post. She can found on Twitter @ellacoquine. Tales from the Chambre de Bonne has an ExpatsBlog.com listing here so add a review if you like! If you appreciated this interview with Lisa, please also drop her a quick comment below.

Lisa is an absolute gem in the blogosphere and in the flesh! I love reading about how she overcomes (and contributes to) all of the shenanigans and I LOVE getting a birds eye view of what life is like in Paris, as experienced by Ella Coquine. I'm so proud of all of her accomplishments and that backbone of steel! Lis, you are surrounded by love always, and now a whole city of light! kiss kiss

Soon after creating my own French expat blog I discovered Tales from the Chambre de Bonne. Over a year later, I still anticipate greatly Lisa's colorful, funny and sincere stories. They are all so inspiring and unique on their own. In addition to the blog, her comment section has been such a joy as I get to read about experiences in France and abroad from others and chat with Mademoiselle Coquine herself! I am not living in Paris but I get to live vicariously through Lisa, a fellow New Yorker, which is lovely!

I love Ella's blog. I can always count on a few laughs, even if my day isn't going so well. So glad you interviewed her. :)