Want to get involved? Become a Featured Expat and take our interview.
Become a Local Expert and contribute articles.
Get in touch today!
Filed: Interviews,Netherlands
Alison Netsel is a native Floridian who has spent time in North Carolina, New Orleans and New York, before continuing her love affair with the letter N and moving to the Netherlands with her Italian boyfriend, two cats, and a dog. Sheâs an art historian by degree, an editor by profession, and can often be spotted around Utrecht with her camera and dog in tow. She developed a love for architecture and history while at university and is in seventh heaven living in a city with 2000 years of history. She now combines her art background with her writing background by researching the city's history and sharing what she's learned through her blog called A Flamingo in Utrecht (see listing here) . It has allowed her to interact with locals who share their own knowledge and love of the city, often pointing her toward new stories and experiences waiting to be discovered and shared. 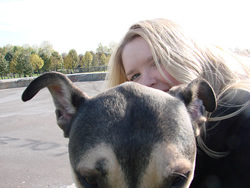 Here's the interview with Alison..

Where are you originally from?
I was born in Orlando, Florida, and lived there until I was 16. I then began moving around, living in North Carolina, New Orleans, and New York City over the years.

In which country and city are you living now?
I now make my home in Utrecht, Netherlands, in the old city center.

How long have you lived here and how long are you planning to stay?
Iâve been here a little over four years and have no plans to leave.

Why did you move and what do you do?
My boyfriend had his own European-based business and it made sense for him to be living in Europe rather than the US. We ended up in the Netherlands because itâs a good central location and had some benefits for small businesses. I worked as a magazine editor in the US, so like many expats with a writing background, I'm now working as a freelance writer and editor. 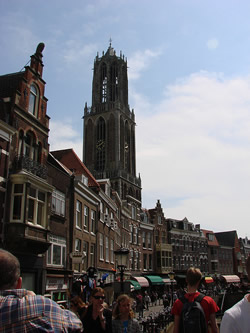 Did you bring family with you?
Our parents remain in their respective countries (US and Italy), but we brought our dog and two cats, who we think of as our children. We were always shocked when people asked if we were taking our pets with us. We couldnât imagine not taking them.

How did you find the transition to living in a foreign country?
Overall, Iâve found the move to be relatively painless. Admittedly, we didnât move to a country with a drastically different culture, but Iâve enjoyed learning and getting used to the small differences.

Was it easy making friends and meeting people; do you mainly socialise with other expats?
I think the older you get, the harder it gets to make new friends, even in your home country. You have to make an effort to find people with similar interests. We were lucky to become friends with the couple from whom we bought our house and they in turn introduced us to others, which helped make us feel at home here. Now, our friends are a mix of locals and expats.

What are the best things to do in the area; anything to recommend to future expats?
Utrecht constantly has stuff going on, with a thriving cultural environment. Even if you donât speak Dutch, you can find a lot to do, including the monthly Cultural Sundays, which have different themes each month. One of my favourite things these days is the Trajectum Lumen, a series of light-art installations throughout the city that are on display every evening. There are also the weekly markets, kayaking down the canals, and visits to local museums, just to name a few things to do. 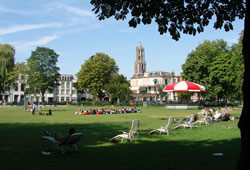 What do you enjoy most about living here?
I love history and architecture, so living in a city that has been around for 2000 years keeps me easily entertained. I love looking at the buildings around town and researching them and the cityâs history. The best part is that itâs not all turned into museums. So many of the buildings and historic sites are still part of everyday life.

How does the cost of living compare to home?
Some things are cheaper, others are more expensive. I find clothing and dining out to be more expensive, but flowers, many basic groceries, and beer/wine is typically cheaper.

What negatives, if any, are there to living here?
Itâs raining right now, and the rain can be tiring at times, but we also get glorious days like when the sun is shining and the air is crisp and clear, resulting in that wonderful Dutch light. The negatives here arenât really any different to any other western country. 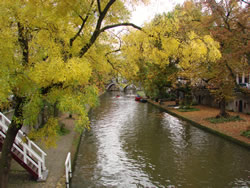 If you could pick one piece of advice to anyone moving here, what would it be?
Learn the language. Thatâs my weakness right now and itâs the one thing that makes me feel hesitant and nervous, even though so many people here speak English. Iâm sure that being able to speak better Dutch would make life that little bit easier.

What has been the hardest aspect to your expat experience so far?
Not speaking the language has been the one thing that has made things more difficult for me, whether in reality or just in my perception. I miss being able to easily ask a question and I hate the feeling of panic when a stranger suddenly begins speaking to me. 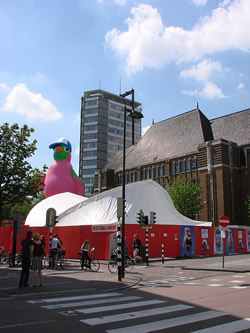 
Tell us a bit about your own expat blog.
Like many expats, I started my blog as a way to keep family and friends updated on what I was doing and experiencing. Ultimately, rather than be purely an âexpatâ blog, Iâve turned it into something of a visual love letter to the city. My personal interests are photography, architecture, and history, so Iâve made the most of living in a city with 2000 years of history by photographing, researching, and blogging about the amazing history of Utrecht, as well as what is going on today. In the process, I learn a lot about where Iâm living and Iâve made some great contacts with locals who seem to enjoy my enthusiasm for the city. Itâs also great hearing from people who are from Utrecht originally but are now living elsewhere.

How can you be contacted for further advice to future expats coming to your area?
I can be contacted through comments on my blog or by email at abnetsel[at]gmail[dot]com. Iâm always happy to share any knowledge I have or point people toward others who are better able to help.

Alison blogs at http://oranjeflamingo.wordpress.com/ which we recommend a quick visit if you haven't been already. A Flamingo in Utrecht has an ExpatsBlog.com listing here so add a review if you like! If you appreciated this interview with Alison, please also drop her a quick comment below.

Congratulations on the interview, Alison! And yes, readers, I can also highly recommend A Flamingo in Utrecht. I was born in Utrecht, but I've learned more about it by reading her blog here on my couch in Austin, Texas, than when I lived nearby! And her photos are beautiful.