Want to get involved? Become a Featured Expat and take our interview.
Become a Local Expert and contribute articles.
Get in touch today!
Filed: Interviews,Italy
Rick Zullo is an American expat living in the Caput Mundi. A few years ago he came to Italy on an extended vacation (we could call it a âsabbaticalâ just to make it sound impressive, but letâs be honest...). About midway through the trip, chance landed him in Rome where he fell in love with the city on the very first night. On the second night, he fell in love with one of its citizens (who is now his wife). A few weeks later he returned to the US, settled his affairs, applied for a visa, and then came back to Rome to live permanently. He has never regretted a moment of it. For work, he is teaching the world English - one Roman at a time. He also writes a blog called Rick's Rome (see listing here)and the occasional book. 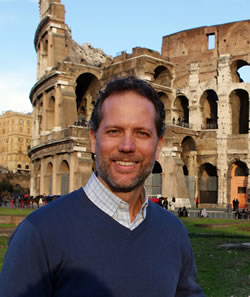 Meet Rick - US expat in Rome

Here's the interview with Rick...

Where are you originally from?
I'm from the US. I was born in Chicago, but spent most of my life in Florida.

In which country and city are you living now?
Rome, Italy

How long have you lived here and how long are you planning to stay?
I've lived here permanently for over two years and plan to stay until they kick me out!

Why did you move and what do you do?
I had been travelling back and forth from the US to Italy for about 2-3 years. Then in 2010 I met my wife. And the rest, as they say, is history. For work, I'm teaching English as a second language, as well as writing a blog and publishing an e-book.

Did you bring family with you?
No, I came alone. Just me and two suitcases. 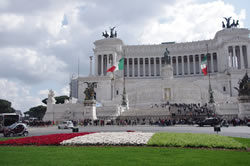 The Vittoriano, also known as the 'Wedding Cake,' or the 'Typewriter.
How did you find the transition to living in a foreign country?
I found the transition to be challenging, but rewarding. When learning to adapt to a new language and culture, you must always be attentive. It's a bit like being a child again, discovering the world for the first time. To me, this is the best part about being an expat.

Was it easy making friends and meeting people; do you mainly socialise with other expats?
Yes, I've found a couple of expat groups that have made the transition easier. Also, since I teach English, I meet other English speakers on a regular basis. That's not to say that I don't attempt to make friends with Italians. It's just that the process is slower. 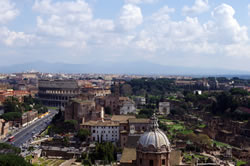 Ancient Rome from above
What are the best things to do in the area; anything to recommend to future expats?
Wow, in Rome you can't go wrong. I devote an entire (ongoing) page of my blog to this topic. You could write down an exhaustive list of things to see in this city and not be able to complete half of it in a lifetime. It can be overwhelming at times--I feel guilty if I don't take advantage of being so intimate with Western history. But sometimes satisfaction comes in just sitting down at a small cafe table and watching the people go by.

What do you enjoy most about living here?
The thing I enjoy most is just being a part of this city's on-going history. More than anything it's the atmosphere that surrounds you here. I try to never take it for granted and I make an effort to consciously appreciate it every single day. Most days, I succeed.

How does the cost of living compare to home?
Rome is a big, international city, so it's expensive. Outside of the big cities, I'd say that Italy is overall cheaper than the US, with the notable exception of energy costs. 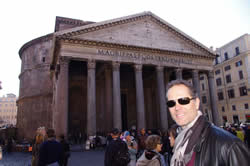 The Pantheon, my favorite monument
What negatives, if any, are there to living here?
Not too many negatives, really. I'm from Florida, so the weather in Rome is much colder than I'm used to in the winter. However, most other expats say that Rome has lovely weather, so I guess it's my own perception that is skewed. But of course there are the usual complaints that expats say about Italy: the lack of organization, the disrespect for "rules," the choking bureaucracy, etc. These stereotypes are somewhat true, of course, but once you learn to manage them, only rarely do they cause acute frustration.

If you could pick one piece of advice to anyone moving here, what would it be?
Don't try to fight against the "system." It's been around a lot longer than you and the sooner you accept this, the easier your life will be. Easy for me to say as an expat, however most Italians are tired of "accepting" things the way they are and would like to see some real societal changes. In some ways, that's the beauty of being a foreigner; you get to pick your battles.

What has been the hardest aspect to your expat experience so far?
Fighting my way through the bureaucracy. It's not that the requirements are unreasonable, it's that you can't get anyone to explain anything to you and the total amount of bureaucracy is overwhelming.

When you finally return home, how do you think you'll cope with repatriation?
During long return visits home, I've come to realized that living in Italy has fundamentally changed me. Mostly for the better, I think. At the same time, it has made living in the US more difficult, as I now have something else to compare it to. Don't get me wrong, there are many things that Italy and Italians could learn from the US (and other countries), but Americans could also learn a thing or two from Italians, especially regarding quality of life issues. 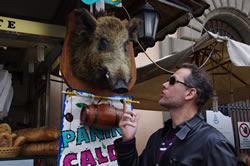 Chatting with the locals
What are your top 5 expat tips for anyone following in your footsteps?


Tell us a bit about your own expat blog.
My blog focuses on two things: First, generally helping both expats and visitors maximize their time in Rome by sharing the knowledge that I've gained through trial and error. Secondly and more specifically, I help anyone who wants to know how to finance their expat experience by teaching English in Rome. Obviously, the two topics have some degree of crossover.

How can you be contacted for further advice to future expats coming to your area?
Anyone considering becoming an expat in Rome can contact me through my blog or directly via email.

Rick blogs at http://rickzullo.com/ which we recommend a quick visit if you haven't been already. Rick's Rome has an ExpatsBlog.com listing here so add a review if you like! If you appreciated this interview with Rick, please also drop him a quick comment below.
Please share: