US Expat Living in Wellington, NZ - Interview With Diane

Want to get involved? Become a Featured Expat and take our interview.
Become a Local Expert and contribute articles.
Get in touch today!
Filed: Interviews,New Zealand
Originally from Wyckoff, New Jersey, Diane Morgan left the US in 2002 on a Watson Fellowship and has lived abroad ever since. She spent a year in Berlin on a Fulbright Scholarship, completed her masters in Amsterdam, and has sailed on boats all over the world. She has been living in Wellington, New Zealand, with her Welsh husband since September 2007. Diane is a Lean Six Sigma Black Belt and works for the NZ Government as a business improvement consultant. Outside of work, she enjoys going to ballet classes and the cinema, hiking, cooking, writing, and travelling. Diane blogs at American In Exile (see listing here) 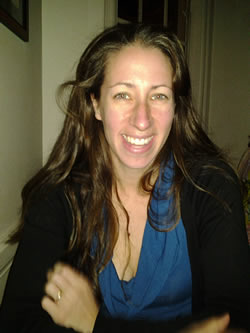 Here's the interview with Diane...

In which country and city are you living now?
I live in Wellington, New Zealand.

How long have you lived here and how long are you planning to stay?
Iâve lived in Wellington for over five years now. I think weâll be here for at least another 2-3 years â but who knows? It could even be longer!

Why did you move and what do you do?
I came to New Zealand with my boyfriend (now husband!) in 2007 because it was easier for us both to get work visas in NZ than it was to migrate to each otherâs countries! I am employed as a business improvement consultant. 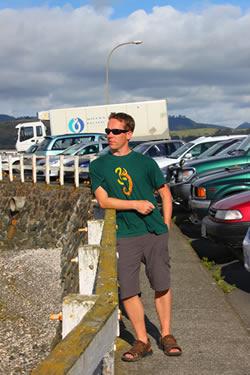 Aled Evans, my husband, overlooking Mangonui Harbour
Did you bring family with you?
I moved here with my boyfriend (now husband!).

How did you find the transition to living in a foreign country?
Pretty easy â I had previously lived in Germany and the Netherlands and moving to NZ was much less complicated. NZ immigration is relatively straightforward, itâs an English-speaking country and the people are really friendly and helpful.

Was it easy making friends and meeting people; do you mainly socialise with other expats?
It was relatively easy to meet people and make new friends. I think this is down to Wellington being a melting pot so we havenât had any trouble finding like-minded people. The Kiwis are just as friendly as the Americans so itâs not hard to make new friends. That said it does seem that the majority of my closest friends here are mainly expats (Canadians, Dutch, and British).

What are the best things to do in the area; anything to recommend to future expats?
My husband and I love Wellington because it offers an incredible combination of culture, wilderness and job opportunities. Itâs a relatively small city but still offers a great mix of restaurants and nightlife, and thereâs a surf beach just down the road from my house! Thereâs also a series of really beautiful walkways all over the city so you can take nice walks after work. 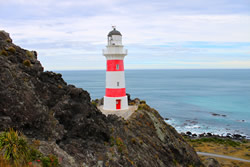 Exploring Wellington's wild coast - Cape Palliser Lighthouse
What do you enjoy most about living here?
See question above. Additionally, I love being able to ride my bike to work, and having access to good ballet teachers. I also love going to Wellingtonâs various cinemas and thereâs so many great restaurants!

How does the cost of living compare to home?
Compared to home, I find the cost of living in New Zealand relatively high. Food is definitely more expensive here than in the US, Germany and the Netherlands. Most other goods also seem to be more expensive as a result of them having to be shipped halfway across the planet. I especially find clothes more expensive â and the selection is not that great. Some women fly to Australia just to go on a shopping spree!

What negatives, if any, are there to living here?
The hardest thing to get used to in New Zealand is the quality of housing, which is generally lower than that in other Westernized countries, by which I mean that Kiwi houses are very poorly insulated. It's hard to imagine what this actually means until you spend a winter here, but thereâs nothing like being holed up in an un-insulated Wellington house when a southerly is blowing in straight from Antarctica. 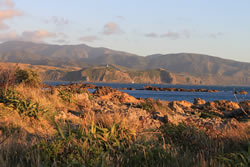 View of the mouth of Wellington Harbour from Moa Point
If you could pick one piece of advice to anyone moving here, what would it be?
Save up as much as you can before you move to give yourself a buffer for the transition. It makes things a lot less stressful if you have some extra funds stashed away so you can concentrate on getting the job you want, or ensuring your kids are doing well through the move. There are always unexpected costs when you move across the planet!

What has been the hardest aspect to your expat experience so far?
The hardest part about living in New Zealand is being so far away from family and friends. We were just at home (UK and US) in May/June 2012 for the first time in four years! It was great to see everyone but it was hard saying goodbye again. When relatives hugged us goodbye and asked, âWhen will we see you again?â I felt sick to my stomach. We donât know when weâll see them next. And itâs a terribly expensive trip home â two round the world tickets came to about $7,200 NZD!

When you finally return home, how do you think you'll cope with repatriation?
As I wrote before, donât know when/if this will happen but I think Iâll be surprised by what I miss about NZ. Just last week, we got stuck in traffic north of Auckland and that was a novelty! I think we will miss the trusting and laid-back nature of the Kiwis. We live in a simpler way here in NZ and itâs good! 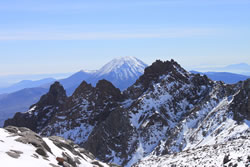 View of Mt. Ngaurahoe on a hike up Mt. Ruapehu, Tongariro National Park
What are your top 5 expat tips for anyone following in your footsteps?


Tell us a bit about your own expat blog.
On my blog, I like to write about a wide range of things including:


How can you be contacted for further advice to future expats coming to your area?
Best to contact me via my blog or via twitter @dianekmorgan

Diane blogs at http://www.americaninexile.com/ which we recommend a quick visit if you haven't been already. American In Exile has an ExpatsBlog.com listing here so add a review if you like! If you appreciated this interview with Diane, please also drop her a quick comment below.

hi, nice life u have over there..i'm a malaysian & really eager to work& stay in NZ. would you mind to share your email address, i want to learn the migration process..thanx..hv a great day! [email protected]