Want to get involved? Become a Featured Expat and take our interview.
Become a Local Expert and contribute articles.
Get in touch today!
Filed: Interviews,France
Daisy Tannenbaum is the precocious twelve-year-old narrator of the blog series MY STUPID JOURNAL, so technically she is a fictional expatriate. After being expelled from school, she is sent to live in Paris with her eccentric Aunt Mill. Mischievous and sardonic, Daisy has an uncanny nose for trouble. She has a decidedly unique take on Paris, so if you know or love the city, youâll enjoy this blog. If you like spies, crooks, history or diamonds, you won't have such a bad time either. (Author J. T. Allen spent years in Paris and draws from his memories and knowledge of Parisian history to create the blog.) 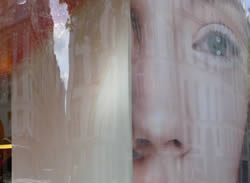 Here's the interview with Daisy...


Where are you originally from?
Paddington, New Jersey, the most boring suburb of Philadelphia.

In which city and country do you live now?
Paris, France, which everybody thinks is so great. Iâm supposed to be so lucky and all that blah-blah, and I guess I am, sort of. But basically, letâs face it, Iâm in exile.

How long have you lived there and how long are you planning to stay?
Iâve been here since I got expelled from sixth grade, so like a few months. As far as how long Iâm staying, I donât know. When I left, Mom said it was just till my new baby brother was born but I kind of donât want to go back to the Fairfield School anyway. I was hoping the plane would crash on the way over but it didnât, so now Iâm here. Thereâs still the possibility of running off with gypsies, which I guess nobody calls them that anymore, but ever since Aunt Mill clotheslined one on the rue de Rivoli after he tried to snatch her purse, Iâm not sure running off with them would be as fun as it sounds.

Why did you move and what do you do?
I punched this jerk at school (who really deserved it) and then the interview with the school psychologist didnât go so well and my Mom is preggers and thatâs not going so well either, plus Mom and Dad are back together again after getting divorced, since he was the one who got her preggers, which is exceedingly weird, but mostly I guess they thought Iâd do better being home-schooled by my Aunt Mill, who is a math teacher here in Paris. As for what I do, Aunt Mill gives me remedial math problems everyday, but since I tested off the charts in everything else she made a deal with me that if I wrote five pages a week in my journal then the rest of my time was mine to read and explore. Itâs a pretty good deal really, and beats the Fairfield School by a million miles. 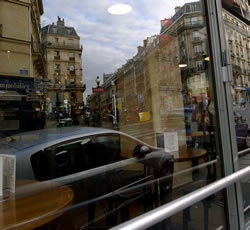 Fifth Arrondissement
Did you bring family with you?
Nope. They sent me here to get rid of me. It would kind of defeat the purpose if they came with.

Was it easy making friends? Do you mainly socialize with other expats?
I only have two friends. One of them drives me crazy because he thinks heâs some suave cat-burglar-in-training. The otherâwho is the most stylish twelve-year-old in ParisâIâm pretty certain I drive her crazy, though sheâs really nice to me anyway. I have a few grown-up friends too, like Madame Rose at the CafÃ© Saint Gervais and Madame Haron at the Archive Nationale, but grown-ups are never really your friends. As for Sief and Nina, my two friends, they arenât expats, theyâre more like half-and-halves, with an America Mom or Dad and then some other nationality like French or Algerian or whatever.

What are the best things to do? Anything to recommend to future expats?
OMG, this is Paris. I mean itâs heaven for non-nitwits. If you like to eat, drink, shop, be weird in anyway you can possibly imagine, or just spend your entire life in museums, this is the place for you. Even for kids itâs pretty cool as long as you have Metro money. The Metro is like a maze and rollercoaster in one. Try riding the whole system, past every stop, in one day with one ticket! However, you do need to love rain. It rains here four hundred days a year. The two days when it doesnât the French keep to themselves because why should they share?

What do you enjoy most about living here?
I really like having a room of my own. And, except for the daily horror of math problems, I have lots of free time. Most of it Iâve spent mixed up with this whole Comtesse de la MotteâMarie Antoinetteâs diamonds mystery and helping Aunt Mill break the Rossignol C Code and figuring out whatâs up with these Russian gangsters and Monsieur Lupatreaux and all like that. Plus, Aunt Mill is a horrible cook, so we eat out a lot. She seems to know every bistro owner in Paris. Oh, and I donât have to clean up after the dog because Aunt Mill doesnât have one, though come to think of it, everyone else in Paris seems to so I end up cleaning off my shoes frequently. 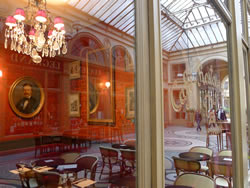 Gallery Vivienne
How does the cost of living compare to home?
Iâm a kid so I donât have to worry about that too much. Aunt Mill complains about how the cost of everything has gone up, but then sheâs lived here since the time of Napoleon so, duh, of course it has.

What negatives, if any, are there to living here?
Okay, so this may sound weird cause of what I wrote earlier, but I really miss my stupid family, including my stupid older sister, Clymene. I mean miss like under your skin, weepy, achy miss, like wake up in the middle of the night and have a private pity-party miss. I hate to admit it. In fact, forget I said that. I hate them all. I never want to go home. Ever. I mean it. I wonât even send them Christmas cards. Though they are free to send me birthday presents if they must.

If you could pick one piece of advice to give anyone coming here, what would it be?
Get lost. I donât mean like buzz off, I mean donât be afraid to not know where you are. Some of the best discoveries Iâve made were when I thought Iâd never find my way home again. So donât whip out that iPhone GPS just yet. 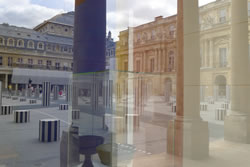 Palais Royal
What has been the hardest aspect of your expat experience so far?
Falling off a scenic Paris rooftop was pretty bad. Getting lost in the sewer and attacked by a crocodile wasnât much fun either. Then thereâs being chased by Vory thugs and getting my ear twisted off by Siefâs Tante Benice. But seriously, knowing that, even though Iâve learned a lot of French, Iâll never understand all the goofy expressions Sief and Nina use is depressing. I mean come onââje peux deadââwhat gives with that? One time one of Ninaâs awestruck boyfriends told her, âJânâsuis pas un poireau.â I am not a leek? Really? She said it meant he didnât like waiting around for her. Oh, of course, what else could that have meant?

When you finally return home, how do you think youâll cope with repatriation?
Not very well. I may be just a kid, but I know that living in someone elseâs culture changes you. Iâm not just talking France here. You may think you miss home like crazy and you may feel like a complete freak living in some strange city or town but it kind of sneaks up on you, the smells, the tastes, the way people dress, even the kinds of facial expressions they make. So when you do get home, I guarantee, home will seem strange to you. Not forever. Not unless youâre a true third-culture kid. But just knowing that what you think is normal is actually pretty strange is a good thing. 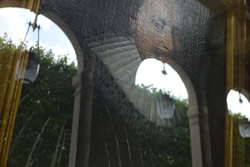 Arcade, Palais Royale
What are your top five tips for anyone following in your footsteps? 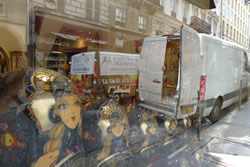 Russain Dolls, Marais
Tell us about your expat blog.
Though unconventional, the blog-novel MY STUPID JOURNAL, turned out quite by accident to be something of an expat blog. Set in the present day, this story (as you may have gathered) follows one Daisy Tannenbaum and her adventures in Paris. Even through her mix-ups with gangsters, run-ins with sewer crocodiles, and the epic chase for Marie Antoinetteâs long-lost diamonds, âMy Stupid Journalâ remains very much devoted to the details and experiences of being a young expatriate in Paris. Like all Americans who have lived in Paris, Daisy struggles with a new language, homesickness, peanut butter withdrawal, making friends, and making a new place home.

How can you be contacted for further advice to expats coming to your area?
If you enjoyed Daisyâs interview and would like read more about her adventures in Paris, you can visit www.daisytannenbaum.com.
If you want to read her new e-book DAISY AND THE PIRATES, about her adventures aboard a tramp steamer and on desolate Moken Island, you can follow this link to her Amazon page: http://amzn.to/17paNuJ.
If you want to ask Daisy a question you can contact her via Twitter or Facebook. You can even e-mail her via her web site.
Please share:

I'm a long-standing fan of Daisy Tannenbaum's and just hope that one day when we meet (because I deny the reality that she's fictional) she'll accept me as a non-nitwit. Excellent interview!!! More of Daisy, please!

I too am a long-time Daisy fan! This is such a fun piece--I love her advice for expats, especially about doing good deeds. Daisy, you are so smart for your 12 years! Thank you for this story expatsblog and what a neat site you have--just read a post about a classical musician living in Turkey! I will be back for more soon!