Driving in UAE - An Expat Perspective

Want to get involved? Become a Featured Expat and take our interview.
Become a Local Expert and contribute articles.
Get in touch today!
Filed: Driving,United Arab Emirates

Going in circles - learning to drive in the UAE

The topic of traffic and terrible driving is a popular one among expats in Dubai, who like to spend the evening chewing the cud over a glass of wine. And it is little wonder that the habits of some leave a lot to be desired. There are generally two main issues: the quality of driving, and the road layout.

As part of the Trucial States, British law governed the roads that were to form the new UAE, and therefore people drove on the left. However, with independence 41 years ago and the growing influence of its Saudi neighbours, the decision was taken to switch sides. Iâm not saying you should have sympathy with the 18 year old driving a Maserati, who cuts you up by crossing five lanes in one go, but there is possibly an inherent reason why driving standards are poor.

Another reason could be that as Dubai is such a melting pot of cultural diversity different road rules and habits are thrown together in a kind of road ratatouille. The courteous driving habits of one driver might be getting in the way of the speed thrills of another, for example. 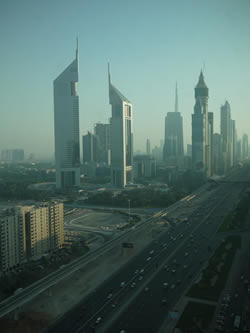 Sheikh Zayed Road: Dubai's main artery
The third reason is the pace at which the road networks and number of drivers is expanding. Fifty years ago Dubai had fewer than fifty cars. Today there are more than 1 million, including more than 17,000 taxis. The roads are clogged with minibuses, taxis, supercars and 4x4s making the driving experience a test of nerves and patience.

This is not, however, just an analysis of driving, but rather an insight into the fun you can have while driving, which will help you to keep your sanity. On our travels, we have seen some spectacular road systems, interesting signs and wonderful roundabouts. (Yes, I can really be that boring).

When you first drive in the UAE you may feel that your biggest challenge is sharing an eight-lane highway with millions of other drivers who are just focused on one thing â their destination. Donât feel threatened if you get overtaken on both sides, or if someone sits in your blind spot and then cuts you off before you even register he is there (sorry, most drivers are male here). You will see some exquisite examples of ruthless and carefree driving. Believe me, people really do cross eight lanes of traffic without indicating to get off at an exit a couple of hundred metres in front. The paint on the front of your car will be worn thin as the focused driver cuts you off. 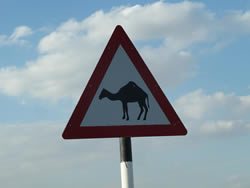 Meeting the neighbours: camel road sign
However, once you have mastered the road etiquette, such as it is, your biggest challenge is likely to be navigation.

Letâs start with the basics; youâre looking out for a street name. Well, keep looking. Street names are a fairly new phenomenon here. Roads are starting to be given names or numbers, but just because youâre looking for street 17b, it doesnât mean itâs the only street 17b. And it may not even have a signpost to indicate that it is street 17b. Or it might actually be called âStreet with the small mosque on the cornerâ.
And even when you do find a street name, it might have two names; an official name and a nickname. Or a historical one and a new one. And forget about the ambiguity created by the different spellings caused by translating names from Arabic.
To aid traffic flow, roundabouts were introduced by the British. (Iâm sure parts of the inheritance were more exciting.) But weâre talking about more than a road system here. Weâre talking about well known landmarks that provide anchor points to lost travellers when the lack of road names offer few clues.

So roundabouts became important navigation points, and as such the central space within the roundabout has been haloed by some creative monuments and sculptures. Iâm pretty fond of the fish roundabout in Fujairah, so named because, well, Iâll let you work it out. And the oyster and pearl roundabout in Ras al Khaimah is pretty special too.

There is a saying that you know youâve been in Dubai too long if, when asking for directions to the building opposite, you receive the answer âleft, second right, third right, first leftâ, and that sounds normal. This isnât a point and shoot society. You canât aim your vehicle in the general direction you want to go and hope everything will be ok. And forget satnav. Road networks change overnight. Several times Iâve been lost coming home from work.

Iâve also been caught out as every junction and interchange is set up in a different way. I may have been looking for a highway exit, which common sense would suggest would appear on my right. So I move over to the right in anticipation of this, as the traffic is heavy, just to in time to see a sign flash past me indicating that the junction exit was on the left. And once youâve passed the exit itâs virtually impossible to get back. There might not be another exit for miles. Or you might be lucky and find an exit but it takes you in the wrong direction. Before you know it youâve reached the Omani border in the middle of the desert. Hereâs the advice: if you miss your exit know that youâve just added at least 20 minutes and 40km to your journey. 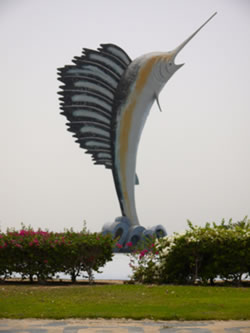 Fish roundabout
Hereâs another piece of advice; donât use your intuition. Iâve been tricked by this. Iâve approached my junction onto a highway, glowing with pride that Iâve followed the signs, then Iâve been tricked into a false sense of security. I want to turn right to Dubai, not left to Abu Dhabi. But the signs are telling me that Dubai is left. Iâm pretty sure they must be wrong so I ignore them and turn right in the direction I want to travel, only for the road to take a sudden and unforeseen swoop to the left to carry me off in the wrong direction, forlorn.

Sometimes roads even disappear altogether into a huge pothole, which appears from nowhere. The roads here, on the surface, are generally in good condition as the network is so new, so the potholes are usually caused below the surface rather than through wear and tear. A burst pipe could wash away the sand causing the road, and everything else around it, to be sucked into a black hole.

So you see, each journey we take in our car, we run the gauntlet. It can be frustrating, nerve wracking and perilous. Just make sure you pay attention to the road to ensure you donât miss your exit and get lost. Once lost you may never be found again.

Buy or rent a car? Most people tend to hire a car for a couple of months until they are settled and familiar with the road network. Buying a car is more cost effective in the long run.

What type of car you want? More choice is on offer as cars and fuel are cheaper than other parts of the world. Despite the environmental footprint many expats opt for a large 4x4, which are more robust and safer on Dubaiâs roads. 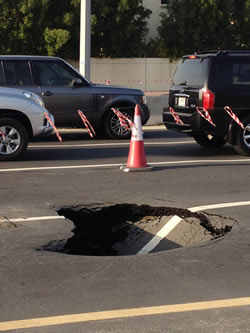 Short cut to Australia: pothole
Showroom or private sale? The advantage of a showroom is that the car comes with a warranty and secondhand cars have safety checks. Dealerships can make the process smoother by helping you to secure finance and registering the car with Dubai Road and Transport Authority (RTA) on your behalf. Buying through an individual is more risky but you could get a better deal.

What are the legal requirements? Vehicles must be registered annually with the Dubai Traffic Police, and service stations EPPCO and Emarat run full registration services. If you already have a driving licence, and the issuing country appears on an official approval list, then you simply need to convert your licence at an RTA office. Otherwise you can apply for a licence after training from an authorised driving school.

How will I cope? The best way to approach your journey is as calmly as possible, which is sometimes easier said than done. Although the driving rules laid out by the RTA are broadly based on the British regulations, they are frequently ignored. Some drivers can be erratic so give people room and keep your distance, but be aware that an opportunistic driver will try and jump into the gap youâve created.

Do I need car seats for children? Unfortunately, car seats are not compulsory in Dubai but there is a growing awareness that they should be used. Donât be surprised if you spot a child standing on the seat with his head out of the sunroof.

What are the hidden costs? To drive along the Sheikh Zayed Road, the main artery through Dubai, you will need a Salik card, which is an automatic toll payment system that attaches to your dashboard (Salik means open or clear in Arabic). You can buy them directly through the RTA or from petrol stations. There are speed cameras all over Dubai so beware. You could also face a fine if you crash even if your victim is a palm tree. If you drive without your glasses or contact lenses you could be fined Dhs 100. If you are caught racing and driving dangerously you could be fined Dhs 2,000. 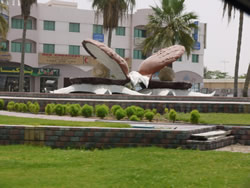 Pearl roundabout
What should I do if I have an accident? Call the police on 999 and report the accident. They will access the situation and issue a pink or green slip. You want the green slip if you are not at fault. The slip is required by insurance companies.

What if I donât have a car? The Metro is a cost effective way to travel and a monorail services the Palm Jumeirah. A 14km tram is also currently being built, which will link the Metro and monorail. The RTA runs bus services, which is the cheapest form of transport. Taxis are convenient and fairly cheap. All taxis are licenced by the RTA and have different coloured roofs depending on the operator.

Useful Resources for Driving in UAE

Helen McClure is a journalist, and a freelance public relations and marketing consultant, who has a passion for international travel, history and photography. Experiences have included backpacking in South America and the Far East, touring Europe in a camper van, working in villages in Africa, travelling with the British Army in Kenya, Oman and Northern Ireland, working in Saudi Arabia, living in Kuwait, Chicago and the United Arab Emirates. She is known for being sport mad (all sports), running long distances (just mad) and being competitive (in everything).

If you have anything to add about your own experience relating to this article, or perhaps have a question for Helen please leave her a comment below!