Navigating Umbrian Schools, One Step at a Time

Want to get involved? Become a Featured Expat and take our interview.
Become a Local Expert and contribute articles.
Get in touch today!
Filed: Education and Schools,Italy

My children have been attending public school in Spello, Italy for four months, and there is much I am still figuring out. One challenge is how deregulated the schools are. For instance, some schools are in session for 6 short days a week, some for 5 short days a week, and some for 5 long days a week. Initially, I was adamant that I only wanted to seek out an expat home in which the local school offered a 5-long-day option, but eventually softened my approach and decided to just roll with whatever school schedule our town provided. I'm glad we did, since our school ended up changing their operating schedule the week before school started. 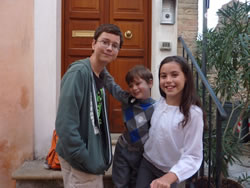 The first day of school
I feared that the schools would be resentful of the extra time American students would necessitate, but was humbled to find how embracing the schools have been. Teachers are understanding, and almost all of them extremely kind. They help other students translate birthday party invitations into English, they modify homework, they leave translation software open in the classroom to encourage communication between our children and other students. And they view our children's American status as an unexpected gift. School staff pepper them with questions about the school system in America, the curriculum, the music program. In addition, the school provides an hour of Italian lessons per week to each of my children. 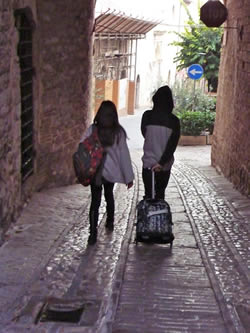 My eldest two walking to school
I should mention that this hour of Italian comes out of their two hours of weekly religious instruction. We found out the hard way that unless you denote that your children are Catholic on the introductory paperwork, they will be removed from Religion class and taken to another classroom that is receiving the exact science lesson they just had. We are not Catholic, but as a family we agreed that taking a Religion class in Italy would be a rich experience. Particularly when we got their school books (which, by the way, in Italy you have to purchase yourself at the local bookstore), and perused the pages of paper doll monks with their interchangeable robes. We had to change their paperwork to mark them as Catholic, so now, they get an hour of Religion a week, and the other hour they have a private Italian lesson. My youngest son is very proud of his lesson being private. 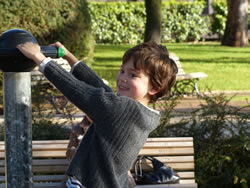 My youngest on the playground
At home, my younger son would be in Kindergarten, my daughter in 5th grade, and my older son in 9th. Here, Kindergarten is another word for nursery school, and the children attend up until 6 years old. Though he is young, we enrolled him in 1st grade of scuola elementare, in part because of his readiness for "real school," and also to keep the children together in the same building. My eldest son should probably have gone to high school, but we kept him in the middle school; he had requested a year where he could walk to school, and while each town of any significant size will likely have its own elementary and middle school, the high schools are all in bigger cities. Also, we knew the language demands of a high school would be exponentially higher, too much for a boy with American soil still clinging to his Keens. Finally, high schools are just too complicated; the schools are divided into specialties, and students have to decide which kind they want to attend and test into it. I needed a glass of grappa just thinking about all the variables. 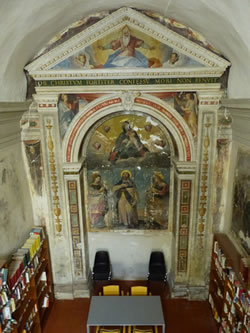 The school library (the building my younger two are in is a former seminary, and the building my eldest is in was a palace owned by the Baglioni of Perugia)
Grappa may well be a requisite parental school supply, to help manage all the school communications; at home, we were accustomed to receiving emails from school, an online school calendar, and a class list with teacher contact information. Here, these easy communications are replaced by frequent "circolare," official, numbered messages from the school carried home by the students. We had to go into the school and ask for a calendar, since the one on the school's website was from 2009. And we missed out on one school event because the avviso was written in our child's notebook, but we didn't see it in time.

But sending your child to school in Italy is sort of like that. You don't know what supplies you need until your child comes home and says that everyone in class has a pencil with red lead on one side, and blue lead on the other. And somehow the other kids have tickets to get pizza at snack time. And when the school calls you to tell you that your child is sick, they call the wrong number and don't retry.

You just learn to let go, to take it one step at a time. People are always telling us, "piano, piano," which I initially thought was their method of acknowledging our irritating American neuroses. But I quickly realized, noâ¦ piano, piano is a way of life. Just take it one step at a time. So you learn to forgive yourself for missing the school performance because, astonishingly enough, your child does get over it. And you brush off the knee-jerk fear that you are being judged and found wanting when you don't pick your sick child up promptly. And you accept the fact that your child needed a special pencil, scissors, a ruler, and you found out belatedly. 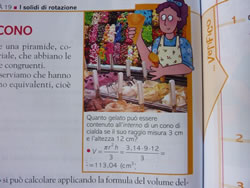 An 8th grade math problem
Of course, there are still times when you have to rise to protect your child, no matter how foreign you feel. For me, that happened when my son was spanked by his math teacher for falling off a chair. Spanking is against the law here, but the taboo against it isn't as strident as it is in the States. It hasn't happened again, and the math teacher apologized to my son after the main teacher spoke with herâbut I think it's important to know that these vagaries exist. My son reports seeing another child spanked, my daughter has been yelled at for not completing math problems in the "correct way" (note: Italian long division is not the same as American long division), and my eldest son reports that teachers will publicly announce the grades on tests with commentary ("Filippo, you got a 4, you'll need to study harder next time"). It's easy to classify hitting as wrong, but trickier to deal with these other areas that are blurred by transitioning cultures.

So tricky that it sometimes feels perilous, but all I can say is piano, piano.

One step at a time.

Michelle Damiani is a clinical psychologist specializing in children and families. Though her practice and her family and remodeling their 100 year old Victorian home were fulfilling, Michelle always felt like she wanted to have new and challenging experiences to make those barriers in the brain tingle and melt away. She began writing short fiction three years ago as a way to tap into her creativity (and won a contest juried by John Grisham), and has been working towards taking a year to live in another country since before having children. After years of living simply in order to put aside enough income, and months of laborious visa wrangles, Michelle and her family arrived in Italy in July of 2012.

If you have anything to add about your own experience relating to this article, or perhaps have a question for Michelle please leave her a comment below!