Cost of Living in Bratislava, Slovakia

Want to get involved? Become a Featured Expat and take our interview.
Become a Local Expert and contribute articles.
Get in touch today!
Filed: Cost of Living,Slovakia

Local Expert Series: The Cost of Living in Slovakia by Julie Callahan

The best indication of the potential cost of living in a country is the average wage. The average worker in Slovakia earns slightly more than 800 euro per month, a third the salary of the average Austrian worker. Slovak pensioners earn less than half that amount - closer to 350 euro per month. Slovaks live modestly and by necessity inexpensively. For expats, it is hard to tap into the cheaper cost structure for housing without local relationships. The potential low cost of living is difficult to turn into reality in the relatively closed Bratislava community.

As an expat and employee of a US multinational corporation, my husband and I live well in Bratislava at a lower cost than a comparable lifestyle in our native United States. Bratislava is a European capital city, home to second tier opera and symphony, and host to a wealth of Central European festivals centered around a vibrant arts culture. It is a walk-able city with a pedestrian historic city center. World class opera and symphony awaits 60 kilometers away in nearby Vienna, Austria. European cities are reachable with discount airlines and short flights, generally less than two hours in duration. The quality of life for us is both high and affordable with good access to all of Europe. 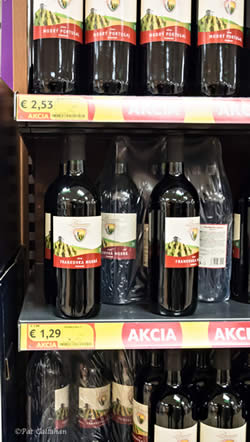 Price of wine in Bratislava
Food staples in Bratislava, potatoes, bread, milk and local vegetables, are all extremely inexpensive. Invariably, my husband or I return from the store with a bag of groceries to exclaim, âYou wonât believe how much this all cost.â Slovak meals are oriented around potatoes. The national dish, haluÅ¡ky, is a potato based gnocchi style noodle. Slovaks top these noodles with sheep cheese and bacon (bryndzovÃ© haluÅ¡ky) or combine them with cabbage and flecks of pork. The local wine is slightly more than one euro per bottle. Beer is high quality, typically Czech and costs around one euro 60 per half liter in the prevalent neighborhood pubs.

Meat is more expensive and eaten infrequently by Slovaks â per my friends perhaps once a week. The most common meats are chicken and pork. All parts are used; cheeks, head cheese, and tongue are commonly served. Still, for us, meat is slightly cheaper than in the United States. The non-essentials; imported chocolates, Italian tomatoes, French cheeses, are sold mainly to the affluent. Specialty foods are priced comparably to the United States placing them out of reach for the average local family.

Eating out in Slovakia is a luxury for the locals. When my husband and I dine out, our bill for two with a half liter of beer and a glass of wine runs about 25 euros. For us, eating out is an affordable form of entertainment. Bratislava restaurants serve a hot âmenuâ during weekday lunch which costs fewer than 4 euros for the daily entre with soup. Downtown restaurants are packed at noon for these high value menus, an apparent throw back to government provided hot lunches during communism. The menu specials are never translated. It took us a several months before we realized we could tap into these specials.

Apartments in the core of Bratislava are expensive. As a consequence, and given the current global economic slow down, many apartment buildings in downtown (including half in our building) are vacant. Our two bedroom, single bath, 100 square meter apartment costs 1100 euros per month including utilities. Communist style apartments are plentiful, small, and inexpensive - half the price of our unit. These neighborhoods are challenging for expats given the low level of English language skills throughout the country, including all but the most central neighborhoods of Bratislava. Overall, housing is less than when we moved here 18 months ago and with our local friendships, we could negotiate a much better deal if we were to move to a different apartment. 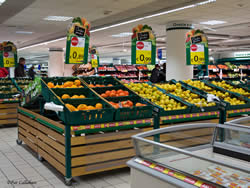 Groceries in Slavakia
Transportation is cheap. I use the tram system to go to work. My husband rarely uses public transportation preferring to walk the tight knit city. Tram passes cost 70 cents for a 15 minute trip, 90 cents for an hour or 300 euros for an unlimited annual pass. Train travel across Central Europe is notoriously cheap â a round trip ticket to Budapest is fewer than 20 euros and a roundtrip bus ticket to Vienna is 15 euros. In keeping with the rest of Europe, gas is very expensive. We havenât driven a car since moving here 18 months ago. The convenience and accessibility of European public transportation enables car free living which is a material savings.

Lastly, entertainment in Bratislava is pervasive and inexpensive. Many nights throughout fall, winter and spring there is an opera, ballet or symphony at one of the three major performance halls. Tickets range from 11 euros for the most expensive symphony seats to 35 euros for the ballet and opera. Buses roll into town each evening as the neighboring Viennese take advantage of performances at a fraction of their local costs. Smaller concerts in the old town museums are five euros and free concerts are regularly performed in the old town churches. Free concerts play in the spring thru fall in the old townâs main square.

Bottom line, Bratislava is a charming city with an affordable life style and easy access to the rest of Europe. My husband and I consider retiring in Bratislava â at least for a few years. Our Slovak friends who are well educated and fluent in English aspire to a life in Western Europe, capturing the much higher salaries with modestly higher cost structure. But for us, Central Europe affords a high quality life style we could not afford in a US city.

Julie Callahan is a 30 year veteran of corporate America currently living and working in Bratislava, Slovakia with an imminent move to Budapest, Hungary underway. She is joined in this adventure by her husband, Pat, a fellow wanderer and â more importantly - a photo buff. With their home, car, and most of their âstuffâ sold, and the remainder tucked away in storage, they plan to daisy chain a life which blows around the world. The intent is to settle down and nest; making new friends and becoming part of the local community before moving on (or not). The travel instrument of choice is a microscopeÂ not a telescope. Julie plans to use this lifestyle to enable an earlier, and more interesting, retirement than would be possible if she remained in her native United States. Her three grown children wonder when this itinerant life will conclude. Frankly, she does also.

If you have anything to add about your own experience relating to this article, or perhaps have a question for Julie please leave her a comment below!

Hi Julie, Thanks for the detailed look at Bratislava. We enjoyed our short visit and could consider living there if we were not so in love with Prague. We too have the global nomad syndrome and can't decide which is better the disease or the cure. Cheers,

Hi, I am moving to Slovakia 22nd Feb 2014 and my would be accompanying me soon. It would be great if you could please guide me the best place to live in Bratislava as my office is located at ObchodnÃ¡ street No.22 Bratislava â Stare mesto. I would prefer a flat little near to my office however, the maximum rent/month should not exceed 400 Euros inclusive of utilities.If the rent is somewhere closer to 300 Euros then it would be great inclusive of all utilities. If its little far then too its ok however, kindly let me know how to travel to my office address and what would be the daily travelling cost by normal transport. Best Regards, Anurag