How to move to Switzerland with 30 Days Notice

Want to get involved? Become a Featured Expat and take our interview.
Become a Local Expert and contribute articles.
Get in touch today!
Filed: Getting There,Switzerland

Local Expert Series: How to move to Switzerland by Tatiana Warkentin

On June 29, 2011, we renewed our car insurance and our lease for another year and I signed up for an after-degree program. At six AM the next day, my husband came bounding into our bedroom with news. We were moving to Switzerland. Whoa! They wanted us there in 30 days. Uh-oh! We had four weeks to quit our jobs, pack up five years and 900 square feet worth of stuff. By the flight date, we had reduced our possessions into two large suitcases, two small suitcases and a back pack each. 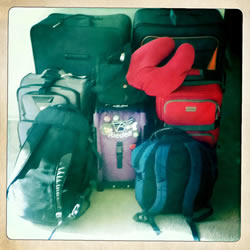 Everything we came to Switzerland with!
We didnât have time to hire a relocation firm or any sort of International mover. It took two weeks for us to hear back from a relocation firm with a quote. We realized even before that belated quote that we needed to DIY our entire relocation and the first step after resigning from our jobs was getting rid of and/or finding a home for everything we owned that wasnât making the trek to Bern Switzerland with us.

We looked for direction, templates, check-lists, ANYTHING that could help us figure out how to move overseas in 30 days. Certainly we were not the first people to do this? We knew we werenât but we felt very much on our own. Our friends and family tried to help as much as they could but we had so much to do and we were all so shell shocked that we bumbled our way through and hoped for the best. Please keep in mind, this is what worked for us. But it is a quick and dirty guide for our quick and dirty move.

Set a due date, then bump it up. Our due date was July 29th. That was the day we boarded a plane for Switzerland. Naturally most people thought this was our due date to have everything done. No. We moved our due date up by about five days. This gave us a five day grace period just in case we got behind schedule or something unforeseen happened (like my husband rear ending someone with the car we needed to sell). In the best case, it gives you a chance to say goodbye to the people who matter without worrying about what you still need to get done.

Mom knows best.Â With two weeks left my mom flew in from the east coast to help us. She got more done in two hours than we had done in two weeks. She played the part of the unbiased third party in our hyper-emotional situation. She was the only person in our lives that could actually say, "no that's ugly you're not keeping it." Get that unbiased third party. In my case it was my mom. In your case it might be your best friend, your cousin, your co-worker. Just get someone. You need someone who isn't emotionally attached to the vast majority of your stuff. They will be the clear voice in the fog of "but what if I need it?!" We thought we could do it, just the two of us. Turns out that we couldn't. I needed my mom to say to me, âTatiana, you will never need the pew bows from your wedding ever again! Throw them away!â If I wasn't attached to something, he was, and it was just a vicious circle. In the end my mom solved that problem.

Categorize!!Â Everything had to fit into one of three categories. Easily replaced, what we want to come back to and what can we live without. Because of these categories, very little was put into storage at my in-laws farm. The stuff we did put in storage are things we want to come back to like our wedding quilt, our custom made bed, framed photographs and our boxes of books. Other than that, everything else found a home. You donât need to limit yourself to those categories. Expat friends of ours who arrived around the same time as we did saved themselves the hassle of heavy suitcases and opted to ship 15 boxes via USPS and they used a similar system that we did but added a âto be shippedâ pile. Another friend of ours had their family members who came to visit bring things as well so a âto be brought laterâ was one of their categories.

Remember that it is just stuff. It took me a long, long, long time to really believe that. But really it's only stuff. Stuff can be replaced. Or you'll just learn to be comfortable living with less. Assume everything youâve heard about small Swiss apartments is true and use it as your launching pad. Keep telling yourself you wonât have room for your flatware and your collection of Coca-Cola glasses. As John and I went through all our stuff we had fabulous sojourns down memory lane. I still have the t-shirt he was wearing the day we met. But hereâs the thing, I actually wear it. It gets used. I also had four candy dishes that belonged to my Oma. Those weren't getting used. They were still sitting in the box that they came to me in. So I donated them. I still think fondly of looking at them through the glass of her china cabinet but I don't need them sitting in box unused. Or even worse, sitting in a box unused and in storage.

People like free stuff.Â We made some cash off of our stuff but that wasnât the point. We didnât have time to price things and worry about making money. We weren't looking to make a profit, just to downsize. We let people into our apartment and let them take anything they wanted that we weren't keeping. Friends and family took our TV, couch, kitchen table, desks, TV trays, DVDs, books, pantry items, Scrapbooking stuff, my sewing machine, our microwave, our roomba. We put a list on facebook of the stuff we were getting rid of and had friends call dibs on things. I called my best friend and read off a list of all the books we were getting rid of just to see what she wanted for her classroom library. My sister-in-law and mother-in-law both basically went grocery shopping in our fridge, freezer and pantry. We gave a good friend my pots and pans. Another friend was having a garage sale so we gave her boxes of stuff and told her just to keep the money. We took my husbands aunt and uncle up on the offer to park our car on their property with a sale sign on it. Friends and family want to help. Let them take your stuff off your hands.

Whilst purging and packing, stop and breath.Â It helps. No really it does. Youâre about to go through a major life change and itâs a sprint not a marathon. Or in our case, a 100 yard dash. Mere days before we left the country my mother-in-law and sister-in-law came in to take any remaining stuff we had kicking around in our pantry and plunked our niece down on one of our remaining quilts. She was nine months at the time. While they rummages, we stopped, took a breath and played with our niece. That moment of normal got us through the last few days of insanity. I guess what I'm trying to say is to take a moment to stop to appreciate the life youâre leaving behind. To feel blessed. Getting rid of stuff is hard and emotional and sometimes you just need to stop and play with your niece. It's similar to stopping and smelling the roses. This rose just happened to be a bit more giggly and squirmy.

We would never wish a 30 day overseas move to ANYONE! But it can be done. Itâs been done. Hopefully you never have to find out firsthand how to do it.

Tatiana Warkentin is writer/blogger who moved to Switzerland with her husband in July 2011 taking her favourite teacup and saucer along for the ride. When she isn't writing what makes her come alive she is an explorer and adventurer finding time to hike and tour chocolate factories. A former fundraising professional she's currently taking online courses in travel writing and travel photography that will give her a career she can carry with her where ever her adventuring takes her next.

If you have anything to add about your own experience relating to this article, or perhaps have a question for Tatiana please leave her a comment below!