Want to get involved? Become a Featured Expat and take our interview.
Become a Local Expert and contribute articles.
Get in touch today!
Filed: Speaking and Language,Dominican Republic

The Dominican Republic was discovered by Christopher Columbus and the language spoken in the country is Spanish. Only Spanish, apart from between one and two million Haitians who have come across the border from Haiti who tend to speak Creole, which has its roots in French. Some of the Haitians will also speak Spanish, especially those who have lived here for a while.

English is only spoken in the tourist areas, and by those Dominicans who have spent time in the United States. In all of the government offices, banks, communications services, utility services, shops, you are unlikely to find anyone who speaks English, apart from expat enclaves and tourist areas. Contracts for house purchase are in Spanish, most doctors and dentists will only speak Spanish, and restaurant menus and road signs are in Spanish. Whilst some expats appear to manage without speaking the language, they have to have a local Dominican to help them, therefore it is well worth learning.
When it comes to learning the language there are various options. One is to take an online course, another to ask a local Dominican or fluent expat to teach you, and another option is to go to a language school. There are language schools in most of the main towns. 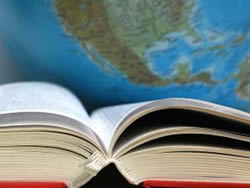 Learning Spanish for living in Dominican Republic
However, learning Spanish is only half the problem. The Dominican dialect is very different to mainland Spanish, not only in the pronounciation but also some of the words used are very different. For example guapo in Spanish means handsome, but in Dominican Spanish means angry. Coche means car in Spanish, but they say caro in the DR. In addition the spoken Dominican Spanish takes some getting used to as most of the letter âsâ are dropped. This means that mosquito becomes moquito, adios becomes adio. Also many words have letters or syllables completely missed out in the spoken language. For example, âwhere are youââ should be dondÃ© tu estas but you will hear it asked as dondÃ© tu ta. Sometimes words can be even more shortened. Autopista meaning highway is often shorted to pita, and he is lying down should be el esta acostado but they say âtacotaoâ.This can be very confusing even for the Spanish speaking visitor and the total novice may find it very hard to look up words in the dictionary not knowing what letters actually should be in the word.

It helps to read the daily online Spanish newspapers, and to watch television in Spanish, especially simple programmes such as soap operas or childrenâs programmes. If you watch in English then read the Spanish subtitles.
Until you can speak fluent Spanish there are online Dominican newspapers in English, and there are cable and satellite stations which broadcast some English films and programmes.

Lindsay de Feliz was born, raised and educated in the UK, where she worked as a marketing lecturer and was Marketing Director for various financial service companies. She then decided to follow her dreams and travel the world as a scuba diving instructor, ending up in the Dominican Republic. She fell in love with the country and its people, eventually met and married a Dominican and has been living there for the last 11 years working as a writer, translator and marketing consultant. Lindsay currently lives in the middle of nowhere in the Dominican Republic with her family, four dogs and seven cats and writes a blog about the Dominican Republic and daily life. Her book about her adventures in the DR, âWhat about your saucepans?â is available from Amazon now (see link below).

If you have anything to add about your own experience relating to this article, or perhaps have a question for Lindsay please leave her a comment below!