Expat Life In Antalya - Ellen on Living in Turkey

Want to get involved? Become a Featured Expat and take our interview.
Become a Local Expert and contribute articles.
Get in touch today!
Filed: Expat Living,Turkey

One of the things I love about Antalya is that it's a big enough city to have a cultural life that includes Symphony, Opera and Ballet companies, but it's small enough to know where the action is on any given night. This makes socializing a lot easier here than it was for me in New York. 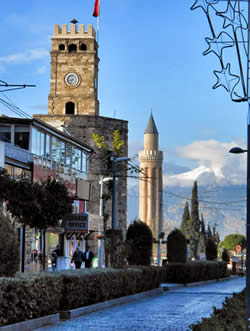 The Ottoman Clock Tower, and Antalya distinctive Fluted Minaret
For example, although I had many more acquaintances through my musical career in New York, there were dozens of concerts going on any particular evening. It was possible to attend an event without running into anyone I knew. In Antalya, the Symphony performs every Friday night, and everyone interested in classical music is there.

At the same time, there's a group of expats competing at Trivia at Shakers Pub in Kaleici, Antalya's old town, on Friday evenings. On Saturday nights, twice a month, our resident expat comedian, Billy Watson, hosts an open mic night at Mr. Blues' Bar, also in Kaleici. It's nice to know that if I feel like socializing I know where I can find people. It's like the song from the TV show Cheers says: âSometimes you wanna go where everybody knows your nameâ. 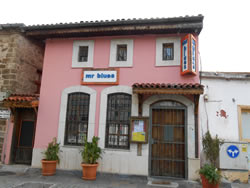 Mr Blues bar in Kaleici, where expats and English-speaking Turks tell stories and sing karaoke
Being an expat nowadays is much easier than it was a generation ago. Various Facebook groups and events make it easy to keep up with what's going on. There's the Antalya Expat Social Group, which includes Turks who want to socialize with us. And there's the Antalya chapter of Couchsurfing, whose members are primarily Turkish, which also posts various activities and meets once a month on a Saturday night at another Kaleici bar, the Art Cafe.

Lest you think I spend all my time at bars, the âLanguage and Cultural Exchangeâ meets every Tuesday evenings at the Bayramefendi Osmanli (Ottoman) Kahvecisi (coffee house), complete with low couches and Backgammon sets. We alternate speaking English and Turkish; I always have a language question that's come up during my studying, and this is where I get it answered. At the same time, I help my Turkish friends with their English problems and drink the most delicious coffee, Menengic Kahvesi. Menengic is a plant related to the pistachio, and gives this version of Turkish coffee a distinct and unusual flavor. 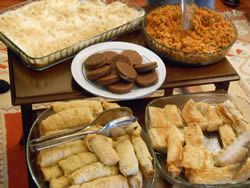 Home-made pastries made by the members of Akdim for our weekly tea
On Tuesday afternoons expats get together at AKDIM, Antalya's Cultural Dialogue Center, for tea and pastries. Unlike the Antalya Expat Social Group, which is predominantly English, Canadian, American and Australian, this gathering is predominantly German and Russian. (This is probably why I've occasionally been told that I speak Turkish with a German accent.) There's also a group that meets at Akdim for coffee on Saturday afternoons, and Akdim organizes occasional trips outside of Antalya, usually over weekends.

In addition to the various weekly events, the expats can be relied on to have a party for every holiday. Whether it's Halloween, Valentine's Day, or the Mayan Calender's End of the World, I know I'm welcome at the festivities.

Before I moved here, friends at home thought I was crazy to move halfway across the world to a country where I didn't know a soul. But it turns out that moving to Antalya was just the boost my social life needed!

Ellen Rabiner has been writing about travel since her teenage years on the road as a violist in a youth orchestra. After college her focus shifted to singing, although she did some creative writing as a lawyer in Los Angeles. She returned home to New York as a soloist at the Metropolitan Opera and resumed traveling as a guest artist with opera companies around the world. She is currently traveling and writing from her home in Antalya, Turkey.

If you have anything to add about your own experience relating to this article, or perhaps have a question for Ellen please leave her a comment below!