Want to get involved? Become a Featured Expat and take our interview.
Become a Local Expert and contribute articles.
Get in touch today!
Filed: Interviews,Australia
Nene is an English-born, raised-in-Wales baby boomer who, together with her husband of twenty years, packed up her kids, said goodbye to family and friends and headed down under to start a new life, in July 2002. The past ten and a half years have been an amazing ride; Nene's children have grown up and are scattered around Australia living life to the fullest, while Nene and her husband have settled in Brisbane, the lovely capital city of Queensland. These days Nene's a writer and her first novel 'Distance' will be published by Australian digital publishers Really Blue Books, in May 2013. Nene's expat blog is called Nene Davies (see listing here) 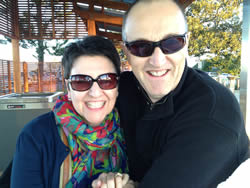 Here's the interview with Nene...

Where are you originally from?
I was born in Surrey, England but my parents were both Welsh and we moved back to Pembrokeshire when I was ten.

In which country and city are you living now?
I live in Australia in beautiful Brisbane!

How long have you lived here and how long are you planning to stay?
I've lived in Oz since 2002 and don't have any plans to return to the U.K. to live at this point, though it's lovely to go on holiday and visit family and friends.

Why did you move and what do you do?
My husband was made redundant in the U.K. towards the end of the 90's and then set up a couple of businesses which went quite well. We came to Australia on holiday for Christmas in 1999 and absolutely loved it. Australia just felt so optimistic to us! When we got home, we knew we wanted to live here, but waited for a year in case it was just holiday euphoria. It wasn't! I'm a writer of contemporary women's fiction and short stories, and my husband works in health and safety. 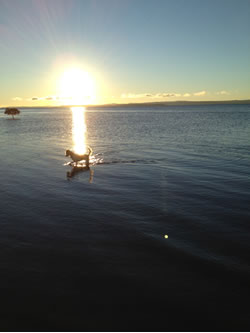 Sunrise on Brisbane's Bayside
Did you bring family with you?
Yes, we have three children who were seventeen, fifteen and eleven years old when we emigrated.

How did you find the transition to living in a foreign country?
Australia felt familiar from day one. Many things are the same as the U.K. and there's no language barrier to overcome.

Was it easy making friends and meeting people; do you mainly socialise with other expats?
We have found Aussies to be really very inclusive and friendly. Our friends are a mixture of ex-pats and Australians. I think that whenever you move - even if it's just to a different town or part of the country, you do need to make an effort to make friends. If you work from home and don't have small children at school, then it can be tricky to meet people, unless you go out and socialise. We tried to never turn an invitation down and to keep an open mind about just about everything. 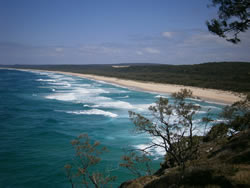 Fabulous North Stradbroke Island
What are the best things to do in the area; anything to recommend to future expats?
Brisbane is the capital of Queensland. And Queensland is known as the Sunshine State, so the image we had of Aussies throwing another prawn on the barbie and loving the outdoor life really does exist! Queensland's beaches are spectacular and Brisbane is situated between the Gold Coast and the Sunshine Coast, although there is no actual surf in Brisbane itself, since the city was founded on the banks of the Brisbane River. We live to the east of the city, on Brisbane's Bayside and the bay islands are a stone's throw away. North Stradbroke Island has fabulous unspoilt surfing beaches, beautiful inland lakes, trails and walking tracks. This whole area abounds with natural beauty. And with the sparkling sunshine and dazzling blue sky - what's not to love?! If you are more of a city slicker than a beach bum, then look no further than Brisbane. It's absolutely shaken off it's large country town persona and is a thriving, multicultural, modern city with all the foodie, arty, cultural vibe you could want - with that gorgeous weather thrown in for good measure! Head inland and Queensland comes into its immense and humbling outback glory. One of my goals is to experience the outback night sky. I've heard that the stars out there are incredible.

What do you enjoy most about living here?
In my experience, Australia is a level playing field where putting in the hard work really does yield results. Aussies do work hard, but they play hard too and there's nothing wrong with that!

How does the cost of living compare to home?
When we arrived, I was forever comparing prices between the dollar value of an item and it's sterling equivalent. For a while, that was how I judged whether something represented good value or not. I might pick up an item priced at $30 and my first thought would be 'what's that in pounds?' whereas now I never think about it. We are so lucky to live in an area where fabulous tropical fruits are grown and these I would say are generallly cheaper than in the U.K., though in general I think the cost of living is fairly similar. 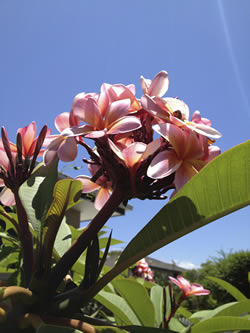 Frangipani flowers in the garden. Christmas Day 2012
What negatives, if any, are there to living here?
Missing family and friends in Wales has to be the saddest thing about being here. We are constantly nagging our loved ones to come over for a holiday and many of them have taken us up on it, but it's still difficult when somebody is ill and we are so far away. So I would say the sheer number of miles between us and our loved ones, is the biggest negative. We try to overcome this by making regular trips to the U.K. ourselves.

If you could pick one piece of advice to anyone moving here, what would it be?
Keep an open mind, follow the work and don't be too proud to start at the bottom. In Australia, it won't take you long to climb that ladder, if you put in the hard yards!

What has been the hardest aspect to your expat experience so far?
My mum and my father-in-law both passed away in Wales last year, within a few weeks of one another. It was awful to be so far away and the fact that we couldn't get there for a few days made a sad and difficult time even more distressing.

When you finally return home, how do you think you'll cope with repatriation?
When I'm in Wales I feel at home and when I'm in Australia I feel at home too. I don't think that I'd have trouble settling back to a Welsh life, if that situation ever arose. 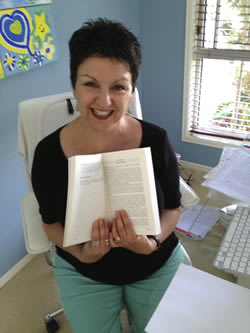 The day I saw my short story 'Day One' published in the Writers Abroad anthology 'Foreign Encounters.'
What are your top 5 expat tips for anyone following in your footsteps?


Tell us a bit about your own expat blog.
I have a website (see link below) which has a blog page (NeneDaviesBlogs) Also, I've written a novel called 'Distance' which will be published by Australian digital publishers Really Blue Books, in May 2013. 'Distance' is loosely based on our own experience of emigrating to Australia, but is definitely not a word-for-word account. My fictional family have some terribly difficult issues to deal with, including a grandmother who is so distraught at the idea of the family leaving, that she puts her daughter in the awful position of having to decide whether to go and risk losing her relationship with her mother, or stay and risk losing her marriage.

How can you be contacted for further advice to future expats coming to your area?
My facebook page is www.facebook.com/nenedavieswrites and my twitter account is @Nene_Davies.

Nene blogs at http://www.nenedavies.com/nenedaviesblogs.html which we recommend a quick visit if you haven't been already. Nene Davies has an ExpatsBlog.com listing here so add a review if you like! If you appreciated this interview with Nene, please also drop her a quick comment below.