Want to get involved? Become a Featured Expat and take our interview.
Become a Local Expert and contribute articles.
Get in touch today!
Filed: Interviews,Turkey
Alba Brunetti came to Ä°stanbul for 10 days in 2009 and stayed for a year. She says she knew that Ä°stanbul had captured her heart from the moment she saw the lights of the city from the plane. Alba was looking for a life change and a place to pursue her dream of being a writer. She found not only a new home, but also an inspiring subject in the city of Ä°stanbul. In 2011 she made Ä°stanbul her home and has been happy there ever since writing about life, food, art and her own adventures in the city where east meets west. Alba's expat blog is called The Bluest I (see listing here) 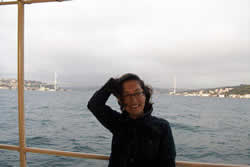 Here's the interview with Alba...

In which country and city are you living now?
I live in Ä°stanbul in Turkey.

How long have you lived here and how long are you planning to stay?
All tolled it is three years and I consider Ä°stanbul my home. 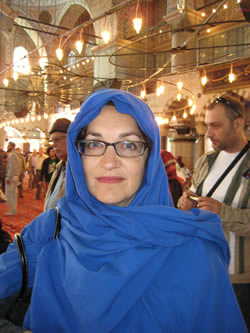 Covered in blue at the Blue Mosque
Why did you move and what do you do?
I moved because I fell in love with Ä°stanbul. I was ready for a change from my Ã¼ber-driven New York life. I wanted to work as a writer and hope to be published in the next year.

Did you bring family with you?
Nope, just me, though I do have a grand plan to get everyone I know to move here.

How did you find the transition to living in a foreign country?
Much easier than you can possibly imagine. In fact, I was ready as soon as I stepped off the plane the first time.

Was it easy making friends and meeting people; do you mainly socialise with other expats?
I came to Ä°stanbul for 10 days to visit friends in October 2009. I ended up staying a year. I came into the best possible situation. My friends were from New York and had moved back to Turkey and most of their friends had also lived for a number of years in New York. They all welcomed me into their circle. Most of my friends were Turkish and just recently I have begun to meet other expats. 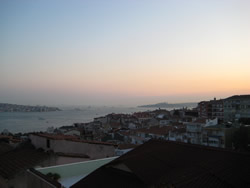 Sunset over BeÅiktaÅ
What are the best things to do in the area; anything to recommend to future expats?
I would spend my life cruising up and down the Bosphorus - it's the one thing I recommend to anyone who comes to visit. That and the food. It is super-amazingly delicious, though I have to say all the Italians think it is too spicy.

What do you enjoy most about living here?
I enjoy the people, the food and the hospitality - I know, that's three things, but they are three things that go together.

How does the cost of living compare to home?
I am trying to do most of my work online with NY/US-based companies for a number of different reasons. The dollar to lira exchange rate is quite good. I think for a Turkish person it is actually quite expensive as salaries are much lower here than in the US and the rents/bills/sundries cost quite a bit when you compare salaries to pricing.

What negatives, if any, are there to living here?
I would say there is a certain Mediterranean quality to life here - when things are going well then it is something you can go with easily, but when things aren't going well it can be highly frustrating to put it mildly. 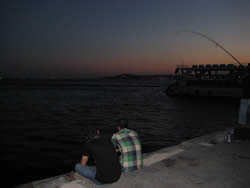 The Bosphorus, Mon Amour
If you could pick one piece of advice to anyone moving here, what would it be?
I would recommend an emergency fund. I had my bag stolen from my home when I first arrived and it was mighty expensive to replace my passport, credit cards and medication (not to mention not being able to access my money until I was able to replace and receive the cards from the US.)

What has been the hardest aspect to your expat experience so far?
I would say certain cultural differences - but I didn't notice it for a long time. Now, it really disturbs me. There is a certain attitude that I really dislike (and believe me, I have found it in NY and in Italy as well), but it seems to be a go-to attitude here. I am not a confrontational person and will generally point out a mistake in a nice way, but I found that even doing it in a nice way elicits some kind of huffy, eye-rolling bad attitude and that really makes me angry. (Yeah, I know it comes out to hide embarassment, but for me -and here I go being all American -even an empty apology would make me happier than the having to deal with that bad-teenager attitude.) 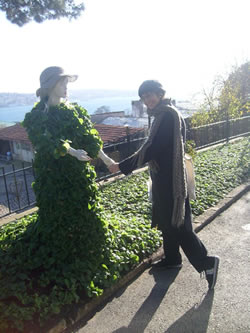 Hiya, Living Sculpture
What are your top 5 expat tips for anyone following in your footsteps?


Tell us a bit about your own expat blog.
The Bluest Ä° is about my life in Ä°stanbul - and I have had quite a few adventures here though most of them I am saving for my book(s). I am a writer and I hope that my blog gives you a taste of Ä°stanbul as well as my madcap-1930s-screwball-comedy life. On the one hand, I've been totally surprised by my acting career - I was an extra in Skyfall and thisclose to Daniel Craig during filming (I blogged about it too!) I've auditioned to be in a commercial with JLo and was (thankfully) cut out of another commercial. On the other hand, I am completely surprised by my inability to find full-time work as an editor and writer here - though I do seem to have a nice niche in academic editing. All in all, I would love to have more paid work writing and editing. I would love to reach a large audience of people because I love Ä°stanbul and I love writing about Ä°stanbul.

Alba blogs at http://thebluesti.blogspot.com/ which we recommend a quick visit if you haven't been already. The Bluest I has an ExpatsBlog.com listing here so add a review if you like! If you appreciated this interview with Alba, please also drop her a quick comment below.

So nice to know about the experiences and tips from Alba, I think these tips can be useful for any expat in any part of the world, especially the language part. learning the language of the new country immediately warms you up to the locals. But I must say Alba was very brave, when she decided to stay in a new country for an year alone and then made it her home. Though I am very much interested in knowing about what actually transpired to make her stay in Turkey? I know all the answers are in the book and I am looking forward to it.I am sure there are going to be tales of cultural shocks, some funny and not so funny mishaps.