Expat Interview With Alana - US Expat Living in Thailand

Want to get involved? Become a Featured Expat and take our interview.
Become a Local Expert and contribute articles.
Get in touch today!
Filed: Interviews,Thailand
Alana is a twenty-something traveler trying to figure out life one place at a time. Originally from Seattle, sheâs been living, teaching, writing and traveling in Thailand and Southeast Asia for the past two years with no plans to âsettle downâ anytime soon. Check out more of her stories, photos and experiences of what itâs like to be a young expat in Asia on Facebook, Twitter and Pinterest. You can also find Alanaâs travel tips on one of the largest womenâs travel sites, Wanderlust & Lipstick. Alana's expat blog is called Paper Planes (see listing here) 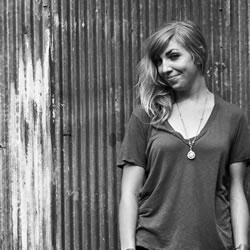 Here's the interview with Alana...

Where are you originally from?
Seattle, Washington.

In which country and city are you living now?
Chiang Mai, Thailand

How long have you lived here and how long are you planning to stay?
Iâve been away from home for about two years and living in Chiang Mai for about a year and a half. I never thought I would stay this long but am finding it hard to leave!

Why did you move and what do you do?
After living and traveling abroad for a little bit after college, I knew I wanted to spend more time living in another country. For two years I stayed at home working and saving before making the change. Initially I came over to Thailand, got my TEFL certification, then traveled through Southeast Asia before coming back to Chiang Mai to teach English. Now Iâm figuring out whatâs nextâ¦ 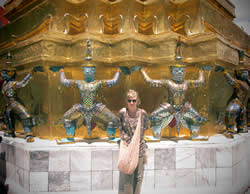 Grand Palace Bangkok
Did you bring family with you?
Nope âI didnât have any family or friends able to make a long term move/commitment to traveling and I wasnât willing to wait around in hopes that someone might make the leap with me.

How did you find the transition to living in a foreign country?
Overall it was pretty easy. Of course there were some low or frustrating moments, but for the most part I really enjoyed and relished in the change of scenery, weather, culture, language and people. I had been drained with my work and situation at home - coming to Thailand was exactly what I needed at that time. It shook me out of my funk and I felt like I was actively participating in my life again instead of just going through the motions. Because the excitement and positivity of the overall change I really enjoyed the transition period rather than finding it difficult.

Was it easy making friends and meeting people; do you mainly socialise with other expats?
This actually was one of the only things I found frustrating and sometimes disheartening. Chiang Mai is pretty small and has a large expat community, so I thought by working at several places I would surely meet people (both expats and Thais) that I connected with, but actually I didnât find it that easy. For about the first nine months I felt like I had met many people living here, but really only one or two real friends that I enjoyed spending my time. I was fine doing things on my own, but confused as to why it was so difficult to truly connect with people.

Now while I definitely have a better group, I still donât have many Thai friends. There are a number of barriers that are difficult to cross. Interestingly enough, Iâm dating a Thai, but other than that, my social circle is mainly expats. 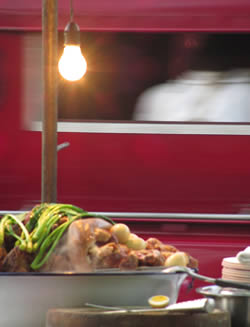 Khao Ka Moo Chiang Mai street stall
What are the best things to do in the area; anything to recommend to future expats?
I love all the outdoor markets, eating at street stalls and simply being able to ride around everywhere on my motorbike. The area surrounding town is beautiful, filled with hills, jungle and rice fields, and I could never get tired of going out for a drive or day trip.
What do you enjoy most about living here? Thereâs a sense of freedom and the idea that anything is possible. Things usually arenât as rigid as back home and people can use their resources more creatively to create a life they want. Part of this comes from the lower cost of living that many expats are used to, it frees up a lot of time and energy when you donât have to worry about money and can still live comfortably, but also the rules are often more flexible here. Everything is about negotiation instead of set expectations. That can take a bit of getting used to, but it also opens up possibilities.

How does the cost of living compare to home?
The cost of living in Thailand compared the States is much, much less. My daily needs are rarely more than $10 - Iâve been completely spoiled with cheap accommodation and good food.

What negatives, if any, are there to living here?
To get home it takes between 24-30 hours and one expensive plane ticket. It also can get really hot, something that Iâm still not completely used to coming from the Pacific Northwest, and the mosquitoes never seem to stop biting! Longtail boat on Chao Praya river - Bangkok
If you could pick one piece of advice to anyone moving here, what would it be?
Realize that things donât work here like they do at home. Once youâre able to accept that things will go more smoothly.

What has been the hardest aspect to your expat experience so far?
I think just the usual â Iâm choosing to be here, but that also means Iâm choosing to be away from my family and friends who have always known me. Iâve missed plenty of weddings and special dates that I definitely would have attended if I had been in the U.S. Thereâs always a trade off.

When you finally return home, how do you think you'll cope with repatriation?
In ways I think returning home in the future will be more difficult than when I moved here. When I came to Thailand I had no expectations, but I will going back home. That combined with the fact that Iâve now seen so many more ways people live their lives, I think it will be difficult returning to a place that is relatively the same as I left it, when Iâve changed so much. 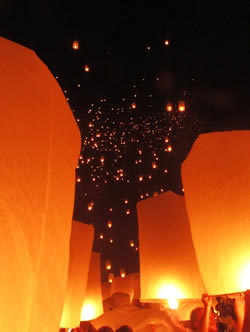 Lanterns during Loy Krathong Chiang Mai
What are your top 5 expat tips for anyone following in your footsteps?


Tell us a bit about your own expat blog.
Paper Planes is a travel and expat blog geared toward twenty-somethings wanting to experience the world beyond their own front door. I focus on everyday living, culture, language and long-term travel as well as provide a resource for newer or solo travelers (particularly women).

How can you be contacted for further advice to future expats coming to your area?
People can reach me via Facebook and Twitter, or contact me via my blog.

Alana blogs at http://www.thepaperplanesblog.com which we recommend a quick visit if you haven't been already. Paper Planes has an ExpatsBlog.com listing here so add a review if you like! If you appreciated this interview with Alana, please also drop her a quick comment below.

Great interview! I enjoy reading your blog, Paper Planes, so it was refreshing to get more background info about your adventures from another site. Keep on living the adventure!