Want to get involved? Become a Featured Expat and take our interview.
Become a Local Expert and contribute articles.
Get in touch today!
Filed: Interviews,Spain
Aliâs the literary lovechild of David Sedaris and Carrie Bradshaw. Born biracial and raised bicoastal, her life has always been unconventional. However, after a series of serious breakups, one involving a celebrity, she decided to quit her job, move to Spain, and write. Little did she know it would be the best decision sheâs ever made. She currently lives in Northern Spain with her Spanish âboyfresbandâ where she works as a teacher and writer. Her book a beautiful mess, comes out this month and like her blog is about laughing at lifeâs sticky situations. Aliâs expat blog is Ali Berlinski (see listing here) 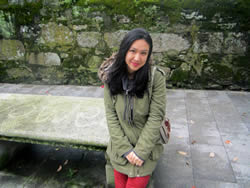 Here's the interview with Ali...

Where are you originally from?
Iâm a bi-coastal American. I grew up in-New Jersey/New York and Northern California.

In which country and city are you living now?
Now I live in rainy Galicia, Spain.

How long have you lived here and how long are you planning to stay?
I moved here in the fall of 2010, fell in love with the region and then a guy shortly thereafter. Now Iâm pretty much here indefinitely.

Why did you move and what do you do?
Iâve always wanted to move abroad and learn another language; I just never gave myself the opportunity. Like most people in their early twenties, I found myself ready for a change of pace, something quieter and simpler than New York City. Plus, I always wanted to write a book. Moving to Spain just seemed like the best way to do all these things.
Now I teach at an English school in CoruÃ±a and write as a freelance journalist for various publications. Iâm also proud to say that my first book, a beautiful mess, comes out in May.

CaiÃ³n, a small village on the coast, 15 minutes from where I live.
Did you bring family with you?
Sadly, my suitcase wasnât big enough to smuggle them in.

How did you find the transition to living in a foreign country?
My transition has come in waves. At first it was challenging, but the good kind that makes you appreciate life and feel like youâre growing. However, once I made the decision to stay, I found that I started becoming more critical of Spanish culture. Since then, Iâve tried to take it day by day and that helps, but itâs definitely a love-hate relationship.

Was it easy making friends and meeting people; do you mainly socialise with other expats?
Quiero cafÃ©, is basically all I could say in Spanish when I first moved here and obviously, thatâs not a good way to make friends. So despite wanting to assimilate, I found myself hanging out with a lot of American foreign exchange students. Since we were all away from home an on our own, we became really close. In a way, my friends served as a surrogate family. It made the biggest difference in terms of transitioning. 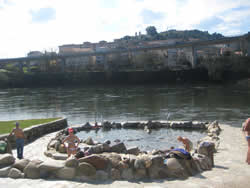 One thing I definitely love is Ourenseâs natural thermal baths
What are the best things to do in the area; anything to recommend to future expats?
EAT! Galicia is known for having great food and Iâd wager to say, itâs the BEST food in Spain so eat everything.

What do you enjoy most about living here?
The simplicity.

What negatives, if any, are there to living here?
A New Yorker at heart, Iâm accustomed to 24-hour everything and above all convenience. Very little about Galicia or Spain is convenient and itâs hard to accept. The endless paperwork and terrible customer service doesnât help either.

Arroz Bogavante, paella kicked up a notch
If you could pick one piece of advice to anyone moving here, what would it be?
Be prepared to endure endless rain. Buy waterproof everything!

What has been the hardest aspect to your expat experience so far?
The Spanish arenât the most heterogeneous society, especially where I live up North. Being biracial (Polish-Filipina), I definitely stick out and often get confused for being Chino. Having lived in really diverse areas my whole life, Iâve never really had to deal with ignorance, so itâs been difficult for me. Plus, I miss seeing different people and enjoying different cultures and foods. Hopefully in time, Spain will continue to diversify.

When you finally return home, how do you think you'll cope with repatriation?
I havenât been back home for more than 2 weeks so luckily it hasnât been a major challenge although I expect it would be. 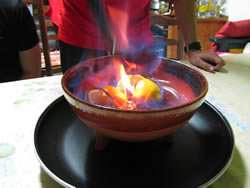 Quemada, a firey witches brew, or liquor drink
What are your top 5 expat tips for anyone following in your footsteps?


Tell us a bit about your own expat blog.
My blog focuses on making complicated situations comical. My mantra is that I help people say yes to their mess. Obviously my expat status and personal life provides me with a lot of fodder for my writing.

How can you be contacted for further advice to future expats coming to your area?
If youâre ever in my area please donât hesitate to look me up via fb or my blog. Iâm always happy to meet new people and help out.

Ali blogs at http://www.aliberlinski.com which we recommend a quick visit if you haven't been already. Ali Berlinski has an ExpatsBlog.com listing here so add a review if you like! If you appreciated this interview with Ali, please also drop her a quick comment below.

That was an awesome read, my life in Galicia is very similar to yours apart from I came to Galicia from the UK, other than that I feel the same, you described my thoughts exactly. Most days I love Galicia for how simple and traditional is it, and some days I really get annoyed how behind the times it can be. I also get funny looks from Galicians however only when I'm on the beach as I'm English with Irish roots so with there being hardly any international tourism I'm the whitest on en la playa :D

Thank you for the tips! I moved to Galicia 2 months ago and am planning to start a life here. I find the people really friendly, but I definitely need to learn Spanish/Galician fast! Im quite sure that there are very few foreigners living here, compared to other parts of Spain. Once I have the language, Im sure it will be easier to enjoy this beautiful place..!