Want to get involved? Become a Featured Expat and take our interview.
Become a Local Expert and contribute articles.
Get in touch today!
Filed: Interviews,Myanmar
Jessica Mudditt is a journalist at The Myanmar Times and she has lived outside her home country of Australia for the past seven years. Jessica moved to Myanmar in July 2012 and her blog contains feature articles, light-hearted accounts of life in Myanmar, book reviews, photo essays and short documentary style films made during her travels. Jessica was accredited as a newspaper journalist in the United Kingdom in 2009 and afterwards moved to Bangladesh, where she worked for Bangladeshi newspapers for almost three years. She lives with her Bangladeshi husband in Yangon and hopes to travel extensively throughout Myanmar in the coming months and years â the best bits of which will be published on her blog. Jessica's expat blog is called Jessica Mudditt's Blog (see listing here) 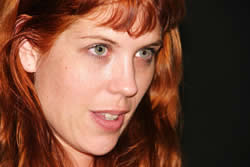 Where are you originally from?
Melbourne, Australia

In which country and city are you living now?
Yangon, Myanmar.

How long have you lived here and how long are you planning to stay?
I came here in July 2012 and hope to stay at least until the elections are held in 2015. Aung San Suu Kyiâs party, the National League for Democracy, boycotted the 2010 elections, however she is now a member of parliament. Although constitutionally she is ineligible to be president because she married a foreigner, there has been so much positive change in Myanmar since 2010 that I think the lead up to 2015 will be fascinating to observe. Myanmar is a very exciting place to live right now.

Why did you move and what do you do?
I moved because I was offered a job at The Myanmar Times. I had been living in Bangladesh for almost three years, working for the United Nations as a stringer and as a special correspondent for a national newspaper called The Independent. I had no idea I would live in Bangladesh so long â I initially came from London to do a six month internship with another Bangladeshi newspaper called The Daily Star. It was an incredible time for me, both professionally and personally (I married my translator!), however Dhaka is one of the worldâs most densely populated cities and after a few years I began to feel worn down and longed for a new opportunity.
I work for The Myanmar Times as features supplement editor and really love it. 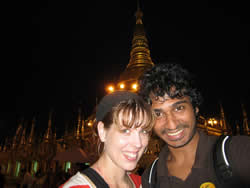 My husband and I at Shwedagon Pagoda in Yangon
Did you bring family with you?
Yes, my husband Sherpa came with me and he is now the editor-in-chief of another newspaper in Yangon, called Myanmar Business Today. It took us a few months longer to arrive than we hoped because getting visas from Bangladesh was difficult. We also brought our cat and have since adopted a street dog called Ripley.

How did you find the transition to living in a foreign country?
I left Australia six years ago â first to travel in Asia for a year before moving to London, where I stayed for more than two years. I didnât find it too difficult to adjust to life in Bangladesh because Iâd spent time in India and Pakistan and I love South Asia. I think it actually became more difficult as time passed, because Dhaka requires a lot of energy and I think my reserves ran out! When I moved to Myanmar, I felt very relaxed, although until I began learning the language, I did find it difficult to do simple things, such as take a taxi somewhere. And I felt sad not to be able to have simple conversations with friendly people on the street. And until we understood how to maintain the water flow from the tank at our house, we were often without water for 48 hours and that wasnât very comfortable because itâs so humid and dishes need to be cleanedâ¦ Internet here is very expensive and Skype rarely works, so I do miss having the internet at home and being able to talk to my family in Melbourne regularly. 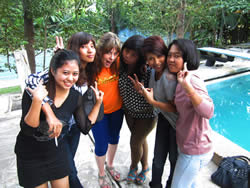 With reporters at The Myanmar Times Christmas Party 2012
Was it easy making friends and meeting people; do you mainly socialise with other expats?
I think Iâm lucky that my job involves meeting a lot of new people, so it hasnât been a problem. I work with Myanmar people and a handful of expats and theyâve all been really helpful in helping me understand how things work and we often go out together after work. However I still miss my friends in Bangladesh â after three years I guess thatâs inevitable. I think I have more Myanmar friends than expats â this is nothing conscious (though Iâd never just hang out with expats!), but probably because there are not very many expats living here and in Bangladesh.

What are the best things to do in the area; anything to recommend to future expats?
Yangon is a fantastic city to live in, although the traffic is getting worse because thousands of new cars are being imported as the country opens up. In addition to the jaw-dropping golden pagodas, there are quite a lot of galleries and parks â one of my favourite afternoons was walking around Inya Lake with my husband. We stopped and had a coffee at a little place in a clearing of trees and realised that we could see Aung San Suu Kyiâs house across the lake! The park also has a ferris wheel with great views of the city. I also enjoy sitting outside as the sun goes down at what are known as âbeer stationsâ and just soaking up the atmosphere (and liquid â Myanmar has some great beers). 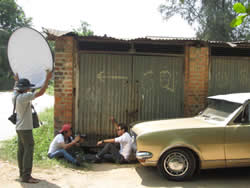 My Myanmar colleagues in a covershoot for the Wheels special repoort by The Myanmar Times
What do you enjoy most about living here?
It sounds corny, but I have to say my job. Itâs challenging and rewarding and now that the censorship board has been abolished, itâs less stressful. I really enjoy listening to both Myanmar people and expats who lived here in earlier times â it seems as though it was a completely different place just two years ago. There are some amazing stories to be told here.
I also love Myanmar food. Itâs my favourite cuisine in the world and unlike any other, though Iâd say itâs probably closest to Indian.

How does the cost of living compare to home?
I think it probably doesnât even compare! I can have an incredible meal for less than two dollars and a beer for less than one. Although supermarket prices are about 50 percent more expensive than Bangkok, itâs still nothing to complain about. My husband and I live in a beautiful old house with a big yard â thatâs certainly not something we would be able to afford in Melbourne.

What negatives, if any, are there to living here?
Initially, it was having a mobile phone number that changed every month (buying a permanent SIM card costs $250) and itâs difficult not having the internet at home (particularly as a blogger). It used to cost $1000 to have the internet installed â now I think the price is around $500. We are just waiting for further reductions on that... 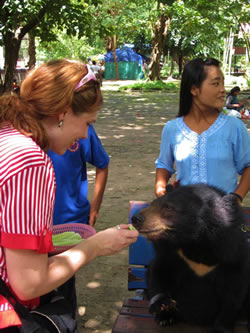 Feeding a bear at Yangon Zoo
If you could pick one piece of advice to anyone moving here, what would it be?
You will probably get a stomach upset, or several, in the initial months. I thought my stomach was fairly tough but I ended up in hospital once (nothing serious) and I felt sick most of the time for a few months. But this will pass and you will learn to find the best places to eat (the busiest ones - because the food is cooked fresh rather than sitting in the sun). The heat will also take its toll (I fainted once and had to get stitches in my head!) so be careful to drink a lot of water and avoid the ubiquitous energy drinks.

What has been the hardest aspect to your expat experience so far?
I think starting to learn a new language from scratch. I wasnât good at Bangla, but I could do all the basic things and that made life much easier. Iâm not good at languages and I need to be more disciplined with studying it, but thankfully my Burmese teacher is amazing, so sheâll get me there!

When you finally return home, how do you think you'll cope with repatriation?
My goal is to become a war correspondent and to also write books, so returning to Australia seems highly unlikely at this point â if all things go well career-wise... 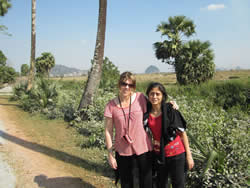 Travelling in Mon State with my friend Thiri
What are your top expat tips for anyone following in your footsteps?


Tell us a bit about your own expat blog.
I started writing my blog while studying journalism in London, at the time when protests in Iran broke out following the rigged elections of 2009. I posted messages and photos from someone living in Tehran and initially didnât think of it as having a long life shelf. However when I moved to Bangladesh I was posting all the time, and some of my blog entries became newspaper articles (now itâs mostly the other way around). I donât write for an expat audience â perhaps this is because my first two jobs as a writer were for a Bangladeshi audience, but I am not a fan of the âus and themâ writing style. While there will always be exceptions, I see no reason why a blog canât be relevant to expats and locals. It just requires sufficient research â because locals will be the first to spot an error! My entries about Myanmar are partly about adjusting to a new country and the things I found most interesting in a cultural sense, while some are feature articles, for example whether the United States will substitute âMyanmarâ for âBurmaâ due to improved relations and the political reforms taking place here. While working in Bangladesh, I also posted all my published travel stories, which included about 15 different countries.

How can you be contacted for further advice to future expats coming to your area?
Iâm happy to be contacted via Facebook (Jessica Mudditt) , Twitter and of course by leaving a comment on my blog.

Jessica blogs at http://www.jessicamudditt.com which we recommend a quick visit if you haven't been already. Jessica Mudditt's Blog has an ExpatsBlog.com listing here so add a review if you like! If you appreciated this interview with Jessica, please also drop her a quick comment below.

Nice write up. everything seems nice and adjustable except the charges of getting a permanent SIM and the internet installed.