Expat Interview With Ashley, US Expat Living in Brighton, England

Want to get involved? Become a Featured Expat and take our interview.
Become a Local Expert and contribute articles.
Get in touch today!
Filed: Interviews,England
Ashley Sheets is a 28 year old American expat whose path to travel began with a study abroad experience in France during her college days. Since then, she's found her way across the Atlantic from Ohio and is now making her home in the lovely seaside city of Brighton, England, where she lives with her English husband. She began blogging in early 2009 to better chronicle her travels around the Pacific, Asia, Europe and the USA, and she has no immediate plans to stop. Ashley loves travel, sarcasm, and pictures of puppies on the internet, and can be found writing about (some of) those things at I Will See You In Far Off Places (see listing here) 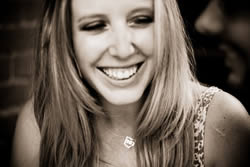 Here's the interview with Ashley...

Where are you originally from?
I grew up in a rural farm town in north-central Ohio, which is in the midwest of the USA. And itâs really, truly okay if you donât know where Ohio is on a map of America-most of the people I meet while abroad donât!

In which country and city are you living now?
I live in Brighton, which is a vibrant and quirky seaside city on the southeast coast of England.

How long have you lived here and how long are you planning to stay?
Iâve lived here for about 17 months now, with no immediate plans to leave the country. Itâs an indefinite stay, maybe even a âforeverâ one.

Why did you move and what do you do?
Ah, love, the great arbiter of change! I moved here to be with my husband, a very handsome and charming Englishman who I met when we were both living in South Korea. Now Iâm a freelance writer and a teacher of English as a second language at an international college in Brighton. I love both of these things, and my work is really satisfying. 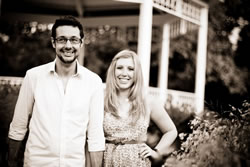 Ashley and Jon
Did you bring family with you?
Well since I came to meet my husband, heâs the only family Iâve got here! The rest of my clan is back in Ohio, living it up in my absence, and I miss them greatly.

How did you find the transition to living in a foreign country?
It wasnât all tea and crumpets, if thatâs what you mean! I think a lot of people see England and America as two very similar countries, just with different accents, but honestly sometimes itâs like another world-separate language included. This wasn't my first move overseas, as Iâve lived abroad several times before-on a Pacific island, in South Korea and elsewhere in Europe, but this has been quite different. Maybe itâs because thereâs no set date on the end where I get to leave and go back to my own country, but the hardest part of the transition has really been trying to make this my new life, and not just a new temporary home. Finding new friends has been quite an adventure, too!

Was it easy making friends and meeting people; do you mainly socialise with other expats?
I think after the university days it gets harder for everyone to make new friends and meet people. Iâm at the weird age where I canât make school friends and I donât have kids so I canât make mom friends-itâs a transient age group! I work with a lot of lovely folks and thatâs been great, but my social circle is 99% non-expat, which I guess comes with marrying a local. A few good friends of mine here are also American expats, so theyâre really great go-tos when we just want to talk about expat things! 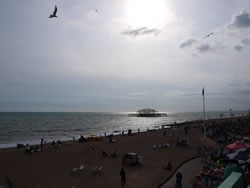 West Pier
What are the best things to do in the area; anything to recommend to future expats?
Brighton has a wealth of fabulous things to do any day of the week! I love it here-itâs a vibrant city right by the sea (even though I would really love it if the beach was covered in sand instead of rocks, but hey.....itâs England). The Brighton Pier and Pavilion are must-sees, and I couldnât more highly recommend a stroll through the Lanes, full of boutiques, cafes, pubs and wonderful independent shops-not to mention chock-full of people watching!

What do you enjoy most about living here?
I love the NHS (National Health Service)! No, seriously. Itâs amazing. Especially coming from America,where the hassle of health insurance and what is/isnât covered is such a big deal. It is amazing to me that I can easily have access to any health services that I may need, without breaking the bank, even if I got really sick or wanted to have a baby. Love! I also love the truly gorgeous landscapes. England is a beautiful country, top to bottom.

How does the cost of living compare to home?
Everyone knows the pound is a great currency to get paid in (and itâs wonderful to have the exchange rate on my side when I travel!), but within England itself, things are pretty expensive. Particularly in the south of England, where I am. The cost of living is higher here, but when you think of things like health care and child care credits-real quality of life issues-it seems lower than back in the States. 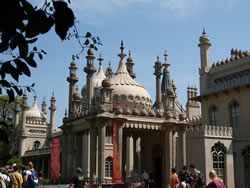 Brighton Pavillion
What negatives, if any, are there to living here?
Easy-the weather! It doesnât rain as much as people think, but the monotony of the weather really gets to me sometimes. I want hot summers, cold winters, and temperate spring/autumn temperatures, but England is mostly middle-of-the-road year round. And it does rain a lot. Ah well.

If you could pick one piece of advice to anyone moving here, what would it be?
Keep an open mind and just go with the flow-British people are notoriously private (stiff upper lip and all that) but Iâve met tons of lovely, friendly people that really want to share the best that the country has to offer, and are more than willing to answer any questions that you may have. And one more thing-get out there and really see England! Thereâs a lot more than just London, and so many visitors only care about the capital. England is a big, amazing country-get out and see it.

What has been the hardest aspect to your expat experience so far?
I really miss my friends and family a ton-itâs hard watching everything happen from so far away when I donât know when Iâll be back. And this sounds terrible, but Iâd honestly say the weather. Iâm used to a lot more sunshine! However, itâs nice to have green winters-all the rain and the lack of snow makes for a beautifully verdant winter time, rather than the gray and brown of the American midwest. 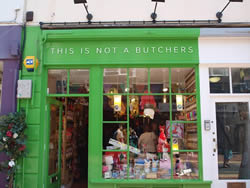 North Laines
What are your top 5 expat tips for anyone following in your footsteps?
Be patient, be flexible, be positive, be brave, and donât feel like you have to change yourself to fit in! You'll find a place in all of it, it may just take some time.

Tell us a bit about your own expat blog.
I began my blog way back in early 2009 to stay in touch with friends and family when I moved to South Korea. In the four years since Iâve traveled around Asia, moved back to America for little bit, and then made the move to the UK in late 2011, visiting here and there along the way. Now I write about my experiences as a permanent expat/immigrant, and about my life in Brighton, and about my sporadic travels here and there.

How can you be contacted for further advice to future expats coming to your area?
I can always be contacted on the blog or through my twitter: @yesimashley

Ashley blogs at http://ashleysheets.wordpress.com/ which we recommend a quick visit if you haven't been already. I Will See You In Far Off Places has an ExpatsBlog.com listing here so add a review if you like! If you appreciated this interview with Ashley, please also drop her a quick comment below.
Please share:

This sounds like a very intelligent young lady. she must have a fantastic father.