From Northern Ireland to USA - Expat Interview With Lasairiona

Want to get involved? Become a Featured Expat and take our interview.
Become a Local Expert and contribute articles.
Get in touch today!
Filed: Interviews,USA
Lasairiona met a guy at a hockey game who told her they couldn't be together if she wasn't prepared for the possibility of a trans-Atlantic move, to which she replied, 'well now you have to take me'. True to his word, in 2009 he swept her across the pond as a 'trailing girlfriend' to Houston, Texas where they have lived in blistering Texas heat ever since. Spending her time volunteering to help other expats who are new to the city, she knows first hand how tough it can be to relocate and figures that if she can help even one person with her experiences, then it's worth writing about. She writes about exploring her new city, state and country, and some day wants to visit all 50 states! Lasairiona's expat blog is called Las and Col go Texan (see listing here) 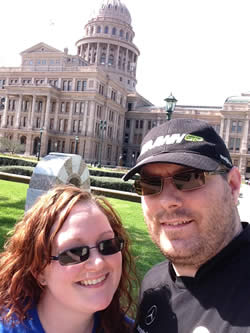 Here's the interview with Lasairiona...

Where are you originally from?
A little border town in Northern Ireland called Newry.

In which country and city are you living now?
Houston, Texas (USA)

How long have you lived here and how long are you planning to stay?
In June, I'll have lived here for 4 years and with my husbands company, you can never really make concrete plans, or say for certain how long you are here for. When we took this posting, we were told it would be for around 3-5 years, with a potential for extension.

Why did you move and what do you do?
My then boyfriend's (now husband) company transferred his job to Houston. His company has a spouses association (a welcoming and support group, run by volunteers, for the spouses of employees), for the first two and a half years here in Houston, I was the welcome coordinator, helping people from all over the world transition to Houston life. My role was helping them with things they needed here, putting them in touch with people who spoke their native language, helping them find English lessons, schools for their kids etc.

Last Spring I was elected as the chapter coordinator (or 'president') of the group, where my role is to lead a group of almost six hundred (mostly) women - every day brings a new challenge, but it's amazing, I get to meet people from all over the world and make a real difference in peoples lives. It's really very rewarding :)

Lastly, I blog - but that started just as a way to keep our friends and family in the loop and has grown into an expat, travel, cooking and fertility blog in the mean time! 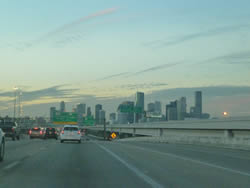 Houston skyline - it's gorgeous at any time of the day or night!
How did you find the transition to living in a foreign country?
I can't profess that moving to Houston from Northern Ireland is the most difficult of transfers by expat standards, both are English speaking and in many ways culturally similar. That said, since it was my first and I am largely family orientated, it wasn't easy. For the first six months of our relocation, I was an absolute misery guts, some days, my husband even sat on the driveway in the car before he came in from work, because he wasn't sure 'who' he was coming home to. I cried a lot. I had some visa issues in the beginning that made it impossible for me to leave the US if I wanted to come back, so I felt (and I guess to a large extent, I was) trapped. It was hard, but after a trip home, six months after moving to Houston, something clicked and I was fine and dandy when we got back to Houston.

A friend had told me that it would take until my first trip back home, before I'd settle in to my new location, she said that I would start to view Houston as home. At the time, I mocked her, but after my trip home that December, I definitely got my feet under the Houston shaped table.

Was it easy making friends and meeting people; do you mainly socialise with other expats?
I think it was much easier for me because firstly, I'm quite a social person and I find it relatively easy to make friends. But it was also a huge help that with my husbands company, came the spouses association, so I met any number of 'other wives' most of whom were in the same position as me, away from home, with varying degrees of 'expat experience'.

I think I'd have struggled if it weren't for the spouses group, though I have since come to learn that there a variety of expat groups here in Houston that I have since joined and are a great, International connections of Houston (ICH) and the The Australia New Zealand society of Texas (TANZOT) are both excellent resources for an expat moving to the Houston area. 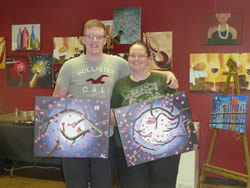 Painting with a twist - doesn't it look like I've been an artist my entire life? :D
What are the best things to do in the area; anything to recommend to future expats?
This is a hard one, there's so much on offer here! From sports and music venues to a rich museum district, I truly believe that Houston has something for everyone. Since you've asked though, some of my favourite things to do here, include taking in a Sugar Land Skeeters baseball game, it's all the fun of major league baseball, without the hefty ticket price (or parking fee!). ComedySportz Houston which is a battle of two teams of improvisational comedians competing for audience laughs.

Galveston beach is a great place to go when I get homesick for water (which, coming from Ireland, you're never really far from) and what I love about Houston are the quirky little museums they have to offer, an Art Car museum, an Air terminal museum and even a funeral museum - they pretty much have a museum for every occasion.

The other best thing to do in the area? EAT! Houston has thousands of eateries and restaurants around, check out yelp.com for reviews and local knowledge on what to order from the extensive menus!

What do you enjoy most about living here?
I really think Texas has a bad reputation for whatever reason, so I wasn't expecting to enjoy living here as much as I do. As I mentioned above, the food is hard not to love. Eating out is cheap and hard to ignore when you have a plethora of options so close to your door. I also love the easy lifestyle, the convenience was easy to get used to, they take 'drive-thru' to a new level, dry cleaners, pharmacists and coffee shops are everywhere, in some parts you can even find drive through liquor stores - you may laugh now, but once you're here, it quickly becomes part of every day life. The accessibility and choice here is almost overwhelming! 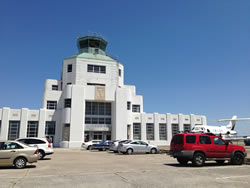 1940's Air terminal museum at Hobby airport, Houston (2013 entry fee $5)
How does the cost of living compare to home?
It tends to be cheaper here in the USA than it is in the UK, especially for electronics and clothes. Anyone who visits us here, tend to arrive with one suitcase and leave with two. Fresh fruit and vegetables tend to be more expensive, it's cheaper to buy convenience/microwave foods than it is to cook from scratch. Cars are cheaper and petrol/gas is much cheaper which is good because everything is so spread out and takes a while to get to!

What negatives, if any, are there to living here?
The heat. Houston is sticky and hot. The summer can get pretty scalding, I spend my time hiding from direct sunlight and hugging the nearest air conditioning unit. Stock up on sun cream, bug spray and after sun, always carry water in your car and keep your phone fully charged when out for drives.

The rain. When it rains here, it's like no rain I've ever seen before. Floods can happen in a matter of minutes due to a poor drainage system. While you think you have time to do what you need to before the rain hits, chances are, you don't. Stay home - Texas drivers don't adjust their driving style for wet weather, so it adds a new layer of danger to being on the road.

Isolation. Being such a large and spread out city, with no public transport system, it's very difficult to 'get out and meet people', especially if you are in one of the 'less central' parts like Pearland. It's hard being so reliant on a car, not being able to walk much like we do in Europe, when you walk down the street here, people either look at you funny, or ask if you're ok or need help.

If you could pick one piece of advice to anyone moving here, what would it be?
You've got to jump in with both feet, Houston won't come to you, you've got to immerse yourself in it. Get involved, try anything once and don't turn down a single social invitation if you can help it - whether you know it or not, you will regret it! 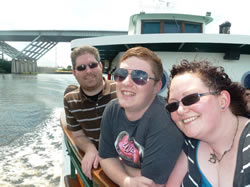 Galveston boat tour, summer 2012 when my brother came to visit
What has been the hardest aspect to your expat experience so far?
Being away from my family during difficult times. Sickness, death and celebrations are the hardest times to be an expat for me, wanting to make that 5,000 mile distance and 6 hour time zone difference, disappear in a heartbeat just so I can give my loved ones a hug.

When you finally return home, how do you think you'll cope with repatriation?
I'm really not sure we will ever return home, I think the closest we'll go back to is somewhere else in the UK and even then I think I'll struggle with repatriation. When we first came here, people told me about the 'expat itch', a desire to stay mobile and, at the time, I was so homesick for N.Ireland that I laughed it off, but after four years of living in Houston, I can't wait to see what else the world has to offer!


Tell us a bit about your own expat blog.
Like I said, originally my blog was created to keep people at home, 'in the loop', to let them see elements of our life and where we live so the Atlantic didn't feel so wide. But after a while, I realised that I had a captive audience that was bigger than our circle of family and friends and as it turned out, I had a lot to say. I write about lots of things, mostly being an expat here in Houston, travelling (we would love to see all 50 states eventually) domestically and abroad, our fertility journey and my expat-inspired hobbies of cooking, baking and scrapbooking. I try and give people realistic blog-posts about every day trials and tribulations of regular people.

How can you be contacted for further advice to future expats coming to your area?
You can tweet me (icemaiden013), 'like' Las and Col go Texan on Facebook, or leave a comment on my blog.

Lasairiona blogs at http://www.lasandcolgotexan.com which we recommend a quick visit if you haven't been already. Las and Col go Texan has an ExpatsBlog.com listing here so add a review if you like! If you appreciated this interview with Lasairiona, please also drop her a quick comment below.