Want to get involved? Become a Featured Expat and take our interview.
Become a Local Expert and contribute articles.
Get in touch today!
Filed: Interviews,England
Cheylene is an American expat currently living in London, England. The 20-something technical writer and translator relocated to London with her boyfriend in Dec. 2010 to escape the trappings of American suburbia and hasnât looked back since. Nearly 3 years on, Cheylene still finds herself enchanted with London. She spends her free time exploring all of its different neighbourhoods, attending cultural events and festivals and learning how to live in her newly adopted hometown. Her blog, Girl in London, is intended to aid expats in their own quest to settle in the UKâs capital through a series of informative guides and personal anecdotes. Cheylene's expat blog is called Girl in London: An American Girl in London (see listing here) 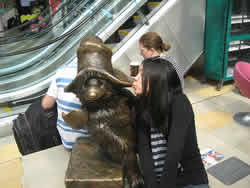 Here's the interview with Cheylene...

In which country and city are you living now?
London, England.

How long have you lived here and how long are you planning to stay?
Iâve been in London for almost three years and plan on sticking around for the foreseeable future. At this point I donât see myself moving back to the US.

Why did you move?
After I graduated university and secured my first job in the US, I decided that suburban American life was not for me. I wanted to live in a city that offered more in the way of culture and also wanted more opportunities to travel. London was the perfect choice. It has so much cultural diversity and is only a few hours away from so many other great European cities. 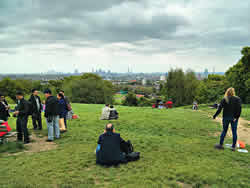 View of London from Parliament Hill
Did you bring family with you?
I moved here with my boyfriend.

How did you find the transition to living in a foreign country?
The transition was definitely harder than I had originally anticipated. Though we speak the same language, England is wildly different from the US. My boyfriend and I felt like everything was a struggle when we first got here. Everything from mailing letters through Royal Mail to finding an apartment was initially very difficult.

Was it easy making friends and meeting people; do you mainly socialise with other expats?
Itâs hard to find English people in London! Iâve befriended a few Brits, but most of the people I know are expats. We tend to have a lot more in common since, regardless of where weâve come from, weâre all going through the same general experience.

What are the best things to do in the area; anything to recommend to future expats?
I always tell everyone that London is all about markets and museums. My favourites are Borough Market, Spitalfields Market, The British Museum and The Natural History Museum. 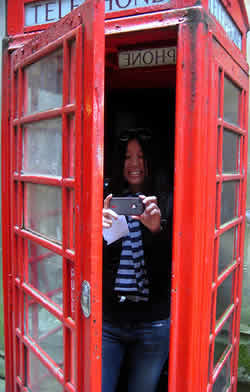 Inside a classic red phone booth
What do you enjoy most about living here?
The culture. London just has so much going throughout the year that itâs impossible to get bored.

How does the cost of living compare to home?
Most things here are considerably more expensive. For example, the rent for our 1-bedroom flat in London would get us a 5-bedroom house with a pool in Las Vegas. However, our incomes here are also higher, which helps balance things out. Basic healthcare is the one area where England is considerably cheaper than the states, and Iâm very grateful for that.

What negatives, if any, are there to living here?
Not having a car is a little annoying, especially when the weather is bad. Itâs probably better for my health though.

If you could pick one piece of advice to anyone moving here, what would it be?
If youâre moving to London, you might as well live in Central London. Living on the outskirts is cheaper, but itâs a lot more difficult to really experience the city from so far away. Zones 1 and 2 are definitely the places to be if you want to get the most out of living here. 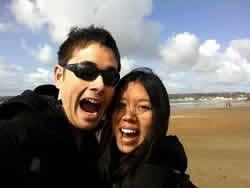 Cheylene and boyfriend on a windy St. Aubins Bay, UK Channel Islands
What has been the hardest aspect to your expat experience so far?
By far it has been taxes. I honestly still donât understand how they work in the UK and as a US expat, Iâm liable to file all sorts of paperwork with the IRS and US government concerning foreign income and bank accounts.

When you finally return home, how do you think you'll cope with repatriation?
I donât think Iâll ever return to the US to live. 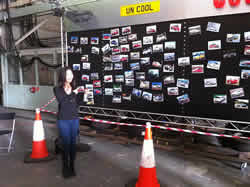 On the set of the BBC hit television programme Top Gear
Tell us a bit about your own expat blog.
Girl in London is a mix of my personal experiences as an expat and practical advice on how to move and settle down in England. I try and cover the basics like the UKâs visa rules and restrictions, the steps required to obtain a UK bank account, how to register with National Health Services and other essential information. Thereâs also a fair amount of advice and tips for people who plan on visiting London as tourists.

How can you be contacted for further advice to future expats coming to your area?
The easiest way to get a hold of me is to tweet me or contact me via my blog/below (see links below)

Cheylene is an American expat living in England. Blog description: Girl in London, written and administrated by US-expat Cheylene Thongkham, provides practical advice and tips on settling, living and enjoying in London from a personal and uniquely American perspective.