Expat Interview With Chase, US Expat Living in South Korea

Want to get involved? Become a Featured Expat and take our interview.
Become a Local Expert and contribute articles.
Get in touch today!
Filed: Interviews,Korea South
"Chase Chisholmâs photography and notes about daily life convey the essence of who he is at the core," according to Joy Newcom, author of Involuntary Joy, "A man who misses little of life because no detail is deemed insignificant." Capturing stories of people and the nuances of culture through various forms of media is his passion. Opportunities have landed him throughout Australia, Canada, the Caribbean, Europe, Guyana, Mexico, Southeast Asia, and the United States. He currently works as a Guest English Teacher in South Korea. His next destination abroad is Myanmar. Chase's expat blog is called Join Chase (see listing here)

Here's the interview with Chase...

Where are you originally from?
I grew up in Forest City, Iowa. Small town America at its finest.

In which country and city are you living now?
I live near Cheongju, South Korea, about an hour and a half south of Seoul. It's more of a rural setting, although "rural" in Korea isnât the same concept as rural from where I was raised. It's pretty hard to be very far from large cities in such a condensed nation.

How long have you lived here and how long are you planning to stay?
Iâve been here for about two years, but plan to temporarily leave at the end of my current contract in August. The hope is to return to Korea in 2015 after a year of teaching in Myanmar. I want to get my MATESOL in Seoul. Chase Chisholm teaching English in South Korea 2012
Why did you move and what do you do?
I came to South Korea less than a year after service with the United States Peace Corps. I served as a Peace Corps Volunteer for two years in Guyana, South America, where I realized I wanted to be a teacher.

I learned about opportunities to teach English in South Korea while working as a Peace Corps Recruiter at the Chicago Regional Office. Greenheart Travel, which is based in Chicago, partners with the English Program in Korea (EPIK) to place native English teachers in public schools all over the Korean peninsula.

Iâve had a wonderful experience teaching English to over 800 elementary students every week for the past two years. Itâs been an incredible, life-changing journey, and the best decision Iâve made.

Did you bring family with you?
Iâm alone on this adventure, but never lonely at heart. Missing out on spending time with friends and family at âhomeâ is one of the sacrifices a world wanderer must make.

How did you find the transition to living in a foreign country?
Iâve lived and worked in several foreign countries. The transition gets easier every time. Itâs the reverse culture shock that gets me. Instead of feeling homesick when Iâm abroad, I experience farsickness, an ache for distance, and wanderlust when I return.

Was it easy making friends and meeting people; do you mainly socialise with other expats?
While itâs important to spend time with other foreigners while living aboard, itâs also the easy thing to do. If all you want to do is meet other awesome travelers, Iâm not going to stop you. Iâm just saying be open to having Korean (or local) friends as well. Youâll realize theyâre just as awesome, and have many of the same thoughts, attitudes, and aspirations as you do.

What are the best things to do in the area; anything to recommend to future expats?
Iâd definitely suggest visiting any of South Korea's many gorgeous temples. One opportunity most temples offer is what's called a Temple Stay. I've done two temple stays. During a temple stay, guests actually stay overnight at a Buddhist temple, and get to experience what it's like living as a monk or nun. I'm not Buddhist, or religious in general, but I found both of the temple stays to be informative and transforming. 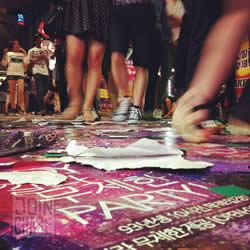 Nightlife in Hongdae Seoul South Korea 2011
What do you enjoy most about living here?
One of the best parts about living in South Korea is getting to eat tons of Korean cuisine. I'm obsessed with Korean food, and can't believe how cheap most meals are. I'd recommend samgyeopsal. It goes down well with soju or makgeolli (traditional Korean rice wine). Other favorites worth mentioning are kimchi jjigae, bulgogi, kimchijeon, bibimbap, and dak galbi.

Another awesome aspect of Korean culture is the nightlife. Popular areas such as Hongdae (in Seoul) stay buzzing all night. There are so many bars, pubs, and clubs to explore. Hongdae is also a great area to check out for tons of cute cafes, unique restaurants, great shopping, and street art almost all day, every day.

How does the cost of living compare to home?
The cost of living in South Korea is rising, although housing is included for most teaching jobs at least. The Korean healthcare system is great, as well as much more affordable than most developed countries. Not only is public transportation comfortable, reliable, and efficient, itâs also reasonably priced. However, even though eating out is surprisingly cheap, buying certain types of produce is astonishingly expensive. . 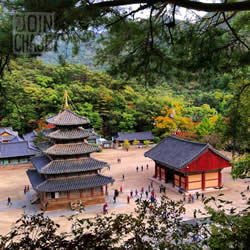 Beopjusa Temple in South Korea 2012
What negatives, if any, are there to living here?
The classic feeling of living in a bubble when youâre one of the very few foreigners in a city, and you teach half the townâs children, can get a little old. Most days I donât mind being seen, or running into countless people I know. But, sometimes Iâm not in the mood to be caught buying a bottle of wine by a large group of my students at the grocery store.

If you could pick one piece of advice to anyone moving here, what would it be?
Donât forget to bring a sense of humor. Living abroad is all about experiencing the most ridiculous, awkward, and hilarious moments possible. Laugh at yourself, at your situation, and at those around you.

Why should someone visit where you live?
I think South Korea's a good destination for seasoned travelers, but especially for someone traveling abroad for the first time. There are many similarities to âWesternâ culture, while also being one of the most fascinating places I've ever lived. It's this glorious blend of old and new, traditional and modern. And Korea's mountainous landscape, breathtaking national parks, and technologically savvy megacity of Seoul offer something for everyone

It's unbelievably safe, easy to get around, and Korean people are generally very helpful and hospitable. I also love that Seoul isnât really on the radar of "must see" places like Tokyo, Hong Kong, Shanghai, Beijing, or other Asian hot spots. There's still so much unknown here, so come and explore!

When you finally return home, how do you think you'll cope with repatriation?
I donât plan to settle in one place for very long, so the only home Iâll ever have is what surrounds me at a particular time. 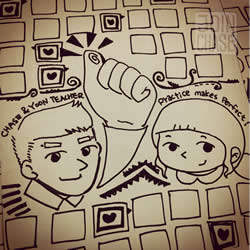 Sticker Reward Chart for Students in South Korea 2012
What are your top 5 expat tips for anyone following in your footsteps?

Tell us a bit about your own expat blog.
I began blogging over eight years ago. And just as Iâve transformed from every experience, so has my online travel journal. It currently features stories about living, teaching, and biking in South Korea. The most popular posts have been my cross-country adventures by bike. You havenât fully experienced South Korea until you hop on a bike and go. Rural Korea is South Korea at its best. Join me for the ride!

How can you be contacted for further advice to future expats coming to your area?
FACEBOOK: https://www.facebook.com/joinchase
INSTAGRAM/TWITTER: @joinchase
PORTFOLIO: http://www.chasechisholm.com