Meet Allie, American Expat Who Moved to South of Spain

Want to get involved? Become a Featured Expat and take our interview.
Become a Local Expert and contribute articles.
Get in touch today!
Filed: Interviews,Spain
Allie is an American who moved to the south of Spain last spring to start her married life after a few years of long distance love and a couple of weddings (to the same swarthy Spaniard). She blogs about Seville and its surrounding area, her world travels and wanderings, how she is trying to adapt to a new culture, her pet canary and dog, her work as an English teacher, creating a home and her budding minimalism. Allie's blog helps her stay connected to her family and friends back in the States as well as serving as a place to record the memories, discoveries and events that make her life rich (even as an economic crisis plagues her adopted country). Allie's expat blog is called Allie in the south of Spain (see listing here) 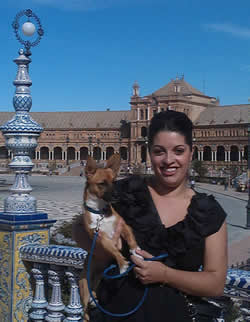 Meet Allie - US expat in Spain

Here's the interview with Allie...

Where are you originally from?
I was born in Michigan in the U.S.

In which country and city are you living now?
I live in Seville, Spain.

How long have you lived here and how long are you planning to stay?
I officially made the move in spring of 2012 and am planning on living in Spain for the foreseeable future (or until I am out of a job).

Why did you move to the south of Spain and what do you do?
I moved to begin my married life with my husband who is Spanish. We met in North Carolina where I was working on an M.A. degree and he was teaching Spanish. A few years of long distance love and then two weddings and voila, I made the move to live in the south of Spain. Currently we are both English teachers. I work in an all-girls primary school and my husband in a secondary school. 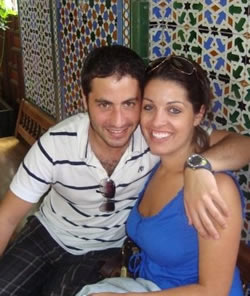 My husband and I in Toledo
Did you bring family with you?
I started this adventure alone and left my family back home, however I feel lucky enough to have married into a family that has accepted and adopted me as one of their own.

How did you find the transition to living in a foreign country?
Having lived and studied abroad before I didn't necessarily experience a big culture shock after initially moving. Mostly I was just excited to begin a new life in a new place. It helps that I speak Spanish as well. After the honeymoon phase ended though I have had moments where I think, what the heck am I doing here?

Was it easy making friends and meeting people; do you mainly socialise with other expats?
I find meeting people in Spain is not difficult but that creating friendships can be. I am lucky enough to work with several other American women and to belong to a club of English speaking women so I feel that I am creating a network in Seville, slowly to be sure. 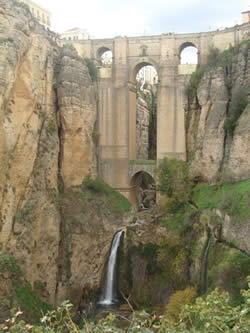 Ronda's Puente Nuevo
What are the best things to do in the area; anything to recommend to future expats?
Seville is a beautiful city! There is a lot to see and discover in this historical place. I also would recommend a trip to visit the Pueblos Blancos which are also located in Andalucia. Talk about picturesque little towns. They are a bit off the beaten track but well worth a roadtrip.

What do you enjoy most about living in the south of Spain?
I love the history and the life in the streets. Where I come from the winters are very cold and snowy so people basically hibernate. In Seville you will almost always find people out and about except during the summer's hot afternoon siesta hours.

How does the cost of living in Seville compare to Michigan?
Things seem to cost about the same as in the U.S. except gasoline, it is MUCH more expensive. At least in my line of work, the wages are less than what you would expect back home as well. 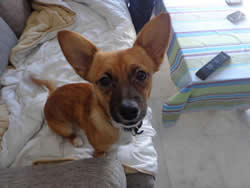 Our adopted dog Cooper
What negatives, if any, are there to living here?
I have found that anything bureaucratic can be a real headache in the south of Spain.

If you could pick one piece of advice to anyone moving to Spain, what would it be?
Be flexible. Things will take longer than you think they will. People will be notoriously late for events or dates. Stores won't be open when you suppose they might. Strikes can and will happen. Just learn to smile and enjoy a cervezita.

What has been the hardest aspect to your expat experience so far?
For me personally it has been being so far from my family and friends. Not only do I miss every day things but also big events. Every time I see my little niece she is a new person. It's tough. 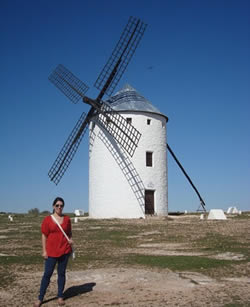 Famous windmills in Castilla-La Mancha
What are your top 5 expat tips for anyone following in your footsteps?

Tell us a bit about your own expat blog.
I write about my life in the south of Spain. I touch on cultural observations, every day events, travels and how my husband and I are creating a home in the new apartment we recently purchased.

How can you be contacted for further advice to future expats coming to your area?
I always read comments on my blog.