Want to get involved? Become a Featured Expat and take our interview.
Become a Local Expert and contribute articles.
Get in touch today!
Filed: Interviews,Mexico
Rebecca Smith Hurd is a freelance writer and editor who moved from San Francisco, California, to Puebla, Mexico, in August 2007 to study Spanish. Within a few months, she'd fallen in love with the place and decided to stay. Since then, sheâs taken in as many sights, sounds, tastes, and cultural experiences as possible, from eating fried grasshoppers (flavored with chile and lime) to being charged by a wooden bull (loaded with fireworks). In the process, Rebecca has become all about Puebla. She founded her blog on May 5, 2010, to share her local insights and travel adventures. She continues to spend lots of time in the capital city and neighboring Cholula with her other half, who is, as locals like to say, "mÃ¡s mÃ©xicano que el chile," or more Mexican than a chile pepper - in his case, a Poblano one. Rebecca's expat blog is called All About Puebla (see listing here) 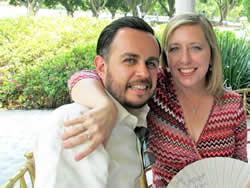 Meet Rebecca - US expat in Puebla

Here's the interview with Rebecca...

Where are you originally from?
San Jose, California

In which country and city are you living now?
Puebla, Mexico

How long have you lived here and how long are you planning to stay?
I've lived in Puebla (and neighboring Cholula) for six years now, since August 2007. I have no idea how long I'll stay, but I currently have no plans to leave.

Why did you move to Mexico and what do you do?
I'm a freelance writer and editor (journalist). I came to Puebla to study Spanish. My plan was to stay for four months, but I fell in love with the place and a Poblanoâand decided to stay a bit longer. That was six years ago and counting!

Did you bring family with you to Puebla?
No, but I married a Poblano in 2011, so I have a big family here now. 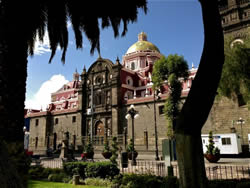 Puebla Cathedral, on the city's main square
How did you find the transition to living in a foreign country?
For me, the transition from living in California to living in Puebla was relatively easy, aside from having to overcome the occasional language or cultural barrier. To be honest, living in Mexico's fourth-largest metropolis isn't drastically different from living in the San Francisco Bay Area. In fact, there are quite a few parallels between the two places.

Was it easy making friends and meeting people; do you mainly socialise with other expats?
The foreign crowd in Puebla is somewhat disparate and transient, so it can be hard to forge close, lasting relationships with other expats. That said, I have met and do socialize with a lot of people from various parts of the world, which is fantastic! Some of my dearest friends here are from other places. To help make connecting a bit easier for folks, I send out an informal monthly newsletter toâand occasionally organize get-togethers forâall foreign residents who are interested.

What are the best things to do in the area; anything to recommend to future expats?
The answer to this question varies wildly, depending on a person's individual interests. Puebla is a major city with all of the modern amenities you'd expect, plus 500 years of history, art, architecture, and gastronomy to explore. There's literally something for everyone here. (Check out my blog to find a whole host of activities that suit you!)

What do you enjoy most about living in Puebla?
I learn something new every single day. Life doesn't get much better than that. 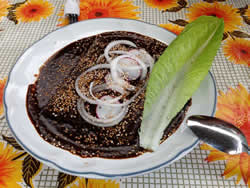 A plateful of mole poblano, Puebla's most iconic dish
How does the cost of living in Mexico compare to the USA?
Much lower. My living expenses are less than half of what they were in San Francisco, which is where I lived before moving here. (Our rent is 25% of what I paid in California for a much smaller apartment.)

What negatives, if any, are there to living in Mexico?
I miss the diversity of California, particularly when it comes to people, religious beliefs, and cuisine.

If you could pick one piece of advice to anyone moving here, what would it be?
Learn as much Spanish as you can before you come and after you get here. Your quality of life will be exponentially better than if you don't.

What has been the hardest aspect to your expat experience so far?
Dealing with banks, cable companies, and other merchants whose service motto seems to "the customer is always wrong." Yes often means no. Employees often tell you what they're instructed to sayâor what they think you want to hearâinstead of actively working to resolve issues (perhaps because they are not empowered to do the latter). It can be very frustrating. Happily, I usually manage to get matters resolved one way or another.

When you finally return home, how do you think you'll cope with repatriation?
I'm not sure. I've learned a lot about the United States living in Mexico, and it's made me see my own culture from a different perspective, for better and worse. Going back to California could be a harder transition than moving to Puebla! 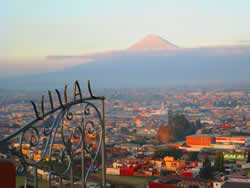 Sunrise view of the PopocatÃ©petl volcano from atop the Cholula pyramid
What are your top 5 expat tips for anyone following in your footsteps?

Tell us a bit about your own expat blog.
All About Puebla is an award-winning, English-language guide to Mexico's 4th-largest metropolis and surrounding state. The blog offers travel and event information, as well as tips and insight into local food, history, art, architecture, music, and culture. We operate independently, and we believe strongly in supporting local businesses, and thus we rarely accept any goods or services for free.

How can you be contacted for further advice to future expats coming to your area?
People are welcome to contact me via email through the Expats page on the website (http://www.puebla-mexico.com/expats/) or follow the site on social media. We're on FaceBook, Twitter (see link below) and Google+.

Rebecca is an American expat living in Mexico. Blog description: A gringa's guide for what to see, do, eat, and explore in and around Puebla, Mexico, the nation's 4th-largest city. Travel. Culture. Food. Expats. More.