Want to get involved? Become a Featured Expat and take our interview.
Become a Local Expert and contribute articles.
Get in touch today!
Filed: Interviews,China
China Elevator Stories (see listing here) is a blog that features conversations with locals in elevators, cabs, restaurants, at the hairdresser and basically anywhere you can imagine. This colourful mix of conversations will make locals come to life right before your eyes. China Elevator Stories also features everyday stories of life in Shenzhen and how the writer of the blog fell in love head over heels with a Chinese guy and married him after knowing him for less than half a year. 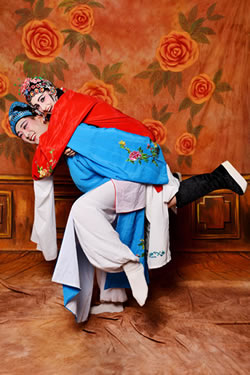 Here's the interview with R...

Where are you originally from?
I grew up in Austria's beautiful countryside.

In which country and city are you living now?
Shenzhen, China â a city of more than 15 million right across the border from Hongkong.

How long have you lived in China and how long are you planning to stay?
I've lived here for roughly a year and don't plan to leave yet. I just married my Chinese husband, so if we won't stay in Shenzhen, we will definitely stay in another city in China for the foreseeable future.

Why did you move to China and what do you do?
I moved here because I have studied graphic design and Chinese studies in Austria and wanted to find a job where I can make use of both Chinese and graphic design. I also really liked living in China a few years back when I did an exchange year in the beautiful city of spring, Kunming, the capital of Yunnan province. I'm now working as an illustrator/graphic designer in Shenzhen.

Did you bring family with you?
No, I came here all on my own, but I met my husband here in Shenzhen, so that counts as family too, doesn't it? 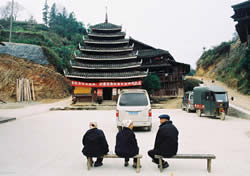 Gathering for a chat at the town square
How did you find the transition to living in a foreign country?
I've been living in China before for a year and had already gotten an idea of what living in China would be like. Since in a mega city like Shenzhen you can find everything you need, the transition really doesn't seem so big.

Was it easy making friends and meeting people; do you mainly socialise with other expats?
No, and no. I don't think it's easy meeting people here, I've met people through work and since this is what has kept me busy (and wedding preparations for the first half of 2013) I haven't really found the time to make real friends yet. I have a feeling that I'm just about to start making real friends (I'm saying real friends because making friends who are rather just acquaintances doesn't count for me). I hardly socialise with other expats here, I'm not a fan of expat bars.

What are the best things to do in Shenzhen; anything to recommend to future expats?
Shenzhen has quite a few really nice parks. One is the former Expo garden in OCT (å­åå­) near Qiaocheng East station (ä¾¨åä¸ç«), another one I can recommend is Lotus Hill Park (è²è±å±±å¬å­) near Civic Center station (å¸æ°ä¸­å¿ç«) where you have a nice view of Shenzhen once youâve climbed the small hill and can watch people perform music and grandparents and parents plastering trees with announcements looking for a match for their grandkids and kids near one of the exits (unfortunately I canât remember which exit it was). There's also Mangrove Forrest right at the sea in Shenzhen where you can take a nice walk or ride a bike and can see Hongkong in the distance. The beach also isn't that far â if you have a car you can get there in 2 hours. Window of the World (ä¸çä¹çª, the subway stop goes by the same name) featuring miniature buildings from all over the world is popular with tourists and the amusement park Happy Valley (æ¬¢ä¹è°·) which isn't too far from Window of the World is fun for families with kids. I personally like the area around Creative Culture Park (åæ æåå­) in OCT in Nanshan district, it feels like you're in the jungle and there are a few nice CafÃ©s and restaurants in that area (I have to warn you about the price though, what you pay for coffee won't be any cheaper than in Central Europe). There is also a small bookshop, a few shops with interesting design stuff and every first weekend of the month they have a creative market where people sell beautiful self-made handicrafts and self-designed stuff like postcards, posters, bags, iPhone covers and much more. 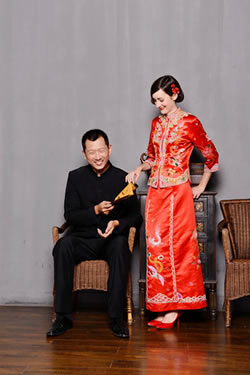 With my Chinese husband
What do you enjoy most about living in China?
I think it's great that many people will just start talking to you on the streets. This is also what my blog is about â conversations (often small talk) with locals. It's a fun way to get to know the culture. I also like the fact that I can get a massage without having to pay too much for it and my shoulders are surely happy about this fact as well. I also like having dinners with many people gathered around one table in a restaurant, not only do you get to eat many different dishes that way, but also will you get to talk with people and be able to listen to their conversations. I also love Chinese tea culture. You get tea everywhere you go, but I don't think that this kind of tea tastes very special. Fine tea on the other hand will be prepared in a really elaborate way (with all the utensils you need for making great tea) â if you've ever watched a Chinese tea ceremony you'll know what I mean. Another thing I love is watch locals dance in public squares. In the evening many people (often women) will gather in public squares and dance together (no matter how small the square is, as long as it's a square it will be used for dancing). I love watching them and joining in can be fun too!

How does the cost of living in China compare to Austria?
For me living here is cheaper than at home but only because my salary is higher than that of most locals. For locals making ends meet can still be quite hard. After all, Shenzhen is one of China's most expensive cities. 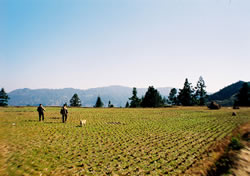 The Longji Rice Terraces in Guangxi province
What negatives, if any, are there to living here?
We have a big problem with mold. It loves to grow everywhere in our apartment. The masses of people can also be quite a challenge. Getting on the bus in the mornings isn't always easy and once you're on the bus, you just want to get off asap because there are so many people. There's a lot of pushing which is something I just can't get used to. Also, I have to be careful with what I eat here, if I'm not careful I easily have problems with the food.

If you could pick one piece of advice to anyone moving here, what would it be?
Try to be open minded and get to know the culture without judging too much. We easily judge things when we're out of our comfort zones, so telling yourself that things aren't worse here than back at home but just different will be a good start.

What has been the hardest aspect to your expat experience so far?
Red tape. I've had to handle tons of it (also because I married a Chinese guy and the paperwork connected to that was overwhelming).

When you finally return home, how do you think you'll cope with repatriation?
Since we plan to stay in China for the years coming, I think reverse culture shock will hit me really hard once I'm back in Austria. We do plan to live in Austria for a few years, but that's probably like 10 years or so into the future. It will also be tough for my Chinese husband because he's not used to Austrian culture yet. 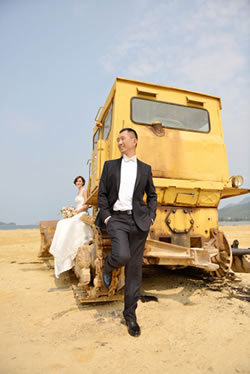 Another picture wiith my Chinese husband
What are your top 5 expat tips for anyone following in your footsteps?

Tell us a bit about your own expat blog.
When I first came to China I had a blog that was just for my family and friends back home. I didn't keep writing for very long. This blog is different because it's meant to be for a wider audience and I'm always happy if a conversation gets going in the comments section. It's basically for everyone who's interested in China or what Chinese people have to say. Many of the blog posts let locals speak and I think that this is what makes this blog different from other blogs.

How can you be contacted for further advice to future expats coming to your area?
You can contact me via my blog (see link below) drop me a message on Facebook (http://facebook.com/chinaelevatorstories), follow me on twitter @elevtrstories or on google+ (https://plus.google.com/103994846579058156524).

R is an Austrian expat living in China. Blog description: This blog features conversations (often small talk) with locals in China. Except for these conversations, I also post everyday stories and a few posts about how I fell in love with a Chinese guy (who is now my husband).

I'm in love with this interview, especially the photos! What a gorgeous couple and fun story!