US Expat Living in The Netherlands, Interviewing Ace

Want to get involved? Become a Featured Expat and take our interview.
Become a Local Expert and contribute articles.
Get in touch today!
Filed: Interviews,Netherlands
Ace is an American expat that went from living in Chicago to starting a new home in the Netherlands in 7 weeks after her husband accepted a job in the city of Tilburg. One year later, the family is still exploring the country (and beyond) and enjoying their new surroundings. She writes about their experiences, raising their son, and whatever else comes to mind. Ace's expat blog is called Life in Dutch (see listing here)

Meet Ace - US expat living in The Netherlands

Here's the interview with Ace...

Where are you originally from?
I was born and raised in Massachusetts in the suburbs of Boston, but I moved to Chicago, Illinois during college and then stayed there with my husband after we got married. We lived there while he finished his doctorate and moved out in July 2012.

In which country and city are you living now?
Currently, I live in Tilburg in the Netherlands.

How long have you lived here and how long are you planning to stay?
I've lived here for one year. My husband has a 5 year contract, but we think it would be great to stay longer.

Why did you move and what do you do?
We moved when my husband accepted a job at a university, and it only made sense to join him. Since the move, I have stayed at home and used the time to write and work on several crafting projects. I'm also learning to speak and read Dutch. 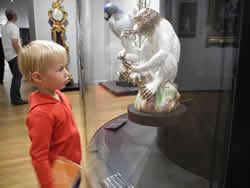 Exploring the art within the Rijksmuseum in Amsterdam
Did you bring family with you?
We brought our young son and our two cats with us. Our son has adjusted pretty well, but I think the cats have only recently forgiven us for the "trauma" they endured during our move.

How did you find the transition to living in a foreign country?
For the most part, I think it's gone rather smoothly. We only had about 7 weeks between my husband accepting his position and our arrival in the country, and considering how quickly it happened, we managed to keep our footing. We have the benefit of many people speaking fluent or near-fluent English, which was extremely helpful before we picked up any basic Dutch. But at times the transition feels like it's ongoing. We're not yet familiar with the school system, and that will be something new to navigate as our son starts school. And sometimes there are just situations where social norms for native Dutch people and our own expectations as Americans lead to some confusion; but fortunately, these incidents have always been minor and just slightly embarrassing at worst.

Was it easy making friends and meeting people; do you mainly socialise with other expats?
The first few months were difficult if only because we were so focused on adjusting to our new home and even just finding our way around the neighborhood and city. But once we settled in a bit we were able to branch out more. Our son goes to a "peuterspeelzaal" (toddler play room) several times a week, and through that I was able to meet other mothers (expat and Dutch). There are a fair number of expats in the area, and I've joined up with some expat groups and made friends through them. Once you meet a few other expats it's very easy to make connections since everyone is happy to introduce you to others. 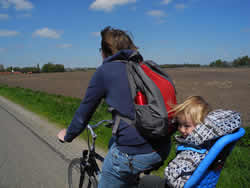 Mark and our Little Man biking from Tilburg to Belgium
What are the best things to do in the area; anything to recommend to future expats?
There are some great museums in Tilburg and other cities. We enjoy going to the Natuurmuseum Brabant, the Textilemuseum, and the De Pont Museum of Contemporary Art all in Tilburg; and we frequently take the train to other cities and explore the city centers and museums. We each have a Museumkaart which allows us to get in for free or a significantly reduced price during the card's subscription period (1 year) at over 400 participating museums in the country. It's a great deal and we have taken full advantage of it. There's a lot of culture and history at your fingertips, you just can't be afraid of going and looking for specific things or just wandering around until you find something.

What do you enjoy most about living here?
I love the cycling culture of the Netherlands. We biked a lot in Chicago, and it's nice to now live in a place where biking is even easier. There are paths all over the country, and we've used them bike over the border to Belgium as well as neighboring cities. It's also really easy to travel by train to other cities. We love to explore, and we've gone quite a few places with the country to visit other cities and see the history and culture unique to each.

How does the cost of living compare to home?
The cost of housing is comparable to the cost of living in Chicago, but it's not a big city like Chicago. We find that eating out is often more expensive on average, too. But the cost of groceries is about the same, which is nice since we do a lot of cooking at home. 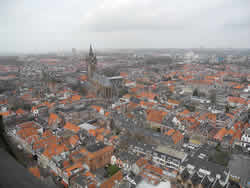 View of the city of Delft from the Nieuwekerk tower
What negatives, if any, are there to living here?
Compared to where we lived in Chicago, this area of the Netherlands seems rather culturally homogeneous, so I feel like we don't get to experience diversity in the same way.

If you could pick one piece of advice to anyone moving here, what would it be?
Embrace the cycling culture of the Netherlands! We rode bicycles frequently in Chicago, so we were happy to make the move where bicycles are so integrated into daily life. The cycling paths are kept as well as the roads and it's easy to purchase bikes new or used, and the available types of children's seats and cargo bikes almost seem endless.

What has been the hardest aspect to your expat experience so far?
I think it's been learning the language. We're all working on learning our Dutch, but because so many people speak English, it's easy to fall back on that when we're getting tripped up over your words and grammar. And in some cases, people detect that you are an English speaker and automatically speak English to you, even if you haven't been struggling while speaking, which can feel a little disappointing when you feel like you've been doing pretty well up to that point.

When you finally return home, how do you think you'll cope with repatriation?
I think repatriation will be just like getting used to things after our initial move. There will be cultural and linguistic differences that we'll need to adjust to, but as long as we're prepared for knowing that there is a difference, we'll get through it without a problem. Mostly, I'd be concerned about learning my way around a new town again since I don't like the feeling of not knowing where I am or how to get home. 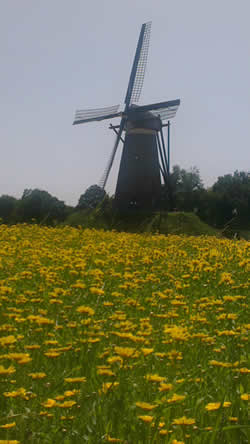 Windmill used as a subject by Vincent van Gogh in Neunen
What are your top 5 expat tips for anyone following in your footsteps?

Tell us a bit about your own expat blog.
I started the blog in the midst of our move to the Netherlands to record what was going on and to keep our friends and family informed. I post a lot about the things we're doing in our new home, things we've come to love about the Netherlands, our daily happenings, our exploration of the country (and beyond the borders), and helpful tips we've learned along the way. Things are still rather new for us, so there's always something new to talk about and share with those also considering moving here or visiting.

How can you be contacted for further advice to future expats coming to your area?
I'm happy to speak with anyone making a move to the Netherlands, and I have all different methods for communicating! Please feel free to contact me through my blog, by Twitter (see links below) and by Facebook.

Ace is an American expat living in Netherlands. Blog description: A young American family living in the Netherlands, exploring their new neighborhood, city, and country and living life in Dutch.