Want to get involved? Become a Featured Expat and take our interview.
Become a Local Expert and contribute articles.
Get in touch today!
Filed: Interviews,United Arab Emirates
Rachael Harrison is a Dubai based teacher, blogger and adventurer. Her blog, 'Life of a Middle East Expat', seeks to document her quest to discover what lies beyond the shopping malls, beaches and bars of the city. Always keen to explore beyond the superficial, Rachael blogs about day to day life and the adventures and new experiences that she has encountered since living in the UAE. Recently, she defended her decision to stay in the Emirates over summer, despite the mass exodus of all her friends and colleagues. A keen runner and photographer, Rachael is rapidly adding more pursuits to her list, and is now a frequent water skier, paddle boarder and jet skier! Having left her old partying ways (mostly) behind her, she can now be found camping in nearby Oman or 'dune bashing' in her spare time. Rachael firmly believes that the most impressive architecture of the UAE is not the man made, but that created by mother nature. Rachael's expat blog is called Rachael Harrison (see listing here) 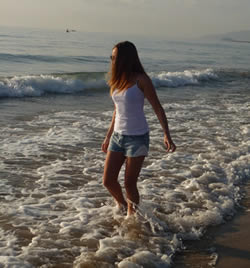 Here's the interview with Rachael...

Where are you originally from?
I am originally from York, in the UK. Prior to moving abroad, I actually only relocated once in my life: a 9 month stint in Hertfordshire. Before this, I even went to University in the same city I was born in.

In which country and city are you living now?
The United Arab Emirates, or more specifically Dubai, is the place that I currently call home.

How long have you lived here and how long are you planning to stay?
I've just had my two year anniversary! It's funny how expats have anniversaries to mark their time in an adopted country. Before this, I spent two and a half years in Cairo, Egypt, so I will actually have been out of the UK for five years in December. I have no immediate plans to leave Dubai, and see myself being here for a couple more years at least.

Why did you move and what do you do?
I felt that I was stuck in a rut in the UK. I had recently qualified as a teacher and was working at a fantastic primary school in Doncaster, but it was incredibly hard to make ends meet. I had debts from University and was living with my parents, which is not what I had envisioned myself doing at the age of 26. Very little money went on enjoying myself - most of it seemed to go on petrol for my daily commute - and there was no way I could afford a place of my own. In April 2008, I took a holiday to Egypt with a friend who was celebrating her 30th birthday. We had both started learning to dive with a local club and decided to treat ourselves to a week by the Red Sea. That holiday was the turning point for me and I realised how much better I felt with a blue sky above my head and the opportunity to do things outdoors. I returned to Egypt a few times and by October 2008 I had secured myself my first international teaching position at a school in Cairo. I believed that living in Cairo would give me the chance to dive more often and that it would make my life more interesting. It certainly did! My initial contract was for eighteen months, but I stayed an extra year on top of this before deciding that it was time to move on. I chose the UAE because it had a wider expat community, good transport links, and the opportunity to broaden my horizons even further. 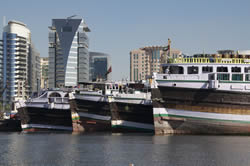 Dubai Creek - old meets new in the most colourful of ways!
Did you bring family with you?
I travelled as a single woman, since I have no children or husband! People always greet this fact with 'Wow, you're so brave', but to me it's not brave. It's an adventure and it's simply me making the most of life.

How did you find the transition to living in a foreign country?
It's not easy. Cairo was much more difficult than Dubai due to both the nature of the city and the fact that it was my first real moveâ¦â¦2000 miles from home! I remember sitting in my first apartment (which was dusty with garish Egyptian furniture), with no money since I hadn't demanded my 'settling in' allowance from the school, wondering how I could last eighteen months and questioning what on earth I had done. Why had I disrupted my life and career for this chaotic place where people openly yelled at me in the street? Once school started 10 days later, I made friends and life suddenly got a lot better.

Dubai was much more easy to settle in to. The school's induction process was more organised, I had fellow teachers living in my building, and I was much more used to the stresses and strains of life abroad, and was therefore able to deal with it much better.

Was it easy making friends and meeting people; do you mainly socialise with other expats?
Emiratis make up only 10% of the population in the UAE, meaning that expats are in the unusual position of being in the majority. However, these expats are a truly international bunch; Indians, Filipinos, South Africans, Australiansâ¦to name but a few! Everybody generally tends to socialise in their own cliques, however. As a teacher I'm lucky because there's always a group of new people starting at the same time, and existing staff are very welcoming. Most of my friends in the beginning were teachers, and I have gradually expanded my network by getting to know friends of friends of friends and so on!

Peace and tranquility in nearby Musandam
What are the best things to do in the area; anything to recommend to future expats?
If you're single, like I was when I first came to Dubai, then it's usually all about the partying! However, I personally grew tired of this after about a year and now I occupy myself with other pursuits! Definitely check out the city from the sea - get on a boat and explore! You can go round The Palm, through the Marina and along the creek - all of which give a different perspective. From a more touristy point of view, I never get bored of watching the Dubai Fountains or going up the Burj Khalifa.

What do you enjoy most about living here?
There is so much I enjoy about living here! After a hard day or week at work, I love the fact that I can just head to the desert or mountains camping, or nip to the beach and get on my stand up paddle board and forget the stresses and strains of everyday life. Back home, I would never have been able to do this due to the cost and bad weather. You may work harder here, but you can certainly play harder too!

How does the cost of living compare to home?
It varies. Some commodities, such as petrol are far cheaper than back home, which can make owning a car much less costly. On the other hand, alcohol is particularly expensive! As are vegetables and decent, healthy food. Generally, I'm much better off financially in Dubai than in the UK, as I'm not taxed on my income and have accommodation included as part of my employment package. Therefore I have more disposable income, which all seems to get spent on travelling!

What negatives, if any, are there to living here?
Dubai can be a pretty shallow place to live at times. It's far too easy to fall into the cycle of shop-party-beach weekend after weekend. Whilst this is fun at first, it can eventually wear you down. There are also those who appear to have it all - flash cars, designer clothes, plastic surgery and so on. This is in stark contrast to those who do not have it all, such as the labourers who are responsible for building the city, working long hours in the blazing sun for very little pay, and living in cramped compounds. It's hard to see this on a daily basis whilst at the same time dealing with the arrogance of some expats! 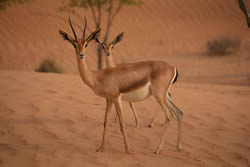 Gazelles in the desert
If you could pick one piece of advice to anyone moving here, what would it be?
Don't just base yourself in the city. There's a whole country to explore and stunning scenery that for me beats any impressive architecture! Similarly, make sure you visit neighbouring countries such as Oman. It's important to go out and discover nature, as it is very unlikely to be on your doorstep, and you will miss it after a while!

What has been the hardest aspect to your expat experience so far?
Cairo was certainly a much more difficult experience, having to deal with harassment on the streets and misconceptions about western women. In Dubai, it was very difficult to cope once the initial excitement wore off, and I was left wondering, 'is this it?' Thankfully, I have realised that there is much more to enjoy! 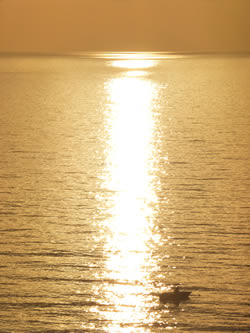 Every day brings a new adventure!
Tell us a bit about your own expat blog.
I started my blog after being in Cairo during the revolution. However, it is only recently that I have begun to blog more regularly. I blog about health, fitness, and of course, expat life, as I try to get beneath the surface of Dubai and find something more 'real' than most get the chance to see. As I travel fairly frequently, I also include these experiences in my blog, alongside reviews of places both abroad and in the UAE. In addition, I use my blog to showcase my photography and document my running adventures.

How can you be contacted for further advice to future expats coming to your area?
I'm always happy to help future expats, and there is a contact form on my blog for people to get in touch with me.

Rachael is a British expat living in United Arab Emirates. Blog description: All about life in Dubai - health, running, photography and travel.

Is Rachel able to get in contact with me? Would be very grateful if she would!! Many thanks :)

hi Rachel, i have read all your experieces and that you wrote about,,its my first time reading blogs of someone,, i have a question to ask,,i am father of two just moved from Dubai back to my home country(pakistan) and i want my children to learn English with British accent but can't find teacher in Pakistan(islamabad), kindly comment if any ideas???

I really loved reading your article. Very informative as I will be travelling to Dubai soon.