Want to get involved? Become a Featured Expat and take our interview.
Become a Local Expert and contribute articles.
Get in touch today!
Filed: Interviews,England
Jacintha loves exploring new cities, finding the hidden gems and taking pictures of people and food. So after having spent time in Paris and New York, she now moved to London where she started her blog Urban Pixxels. A travel and photography blog where she shares her new London life, travel stories and her quest to become a true Londoner. Jacintha's expat blog is called Urban Pixxels (see listing here) 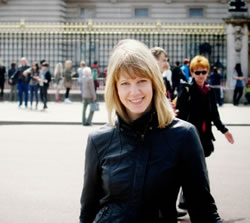 Here's the interview with Jacintha...

Where are you originally from?
I'm from The Hague (Den Haag) in the Netherlands.

In which country and city are you living now?
I'm currently living in London, UK

How long have you lived here and how long are you planning to stay?
I moved to London in March this year (2013), and to be honest have no idea how long I'll stay. At least a few years.

Why did you move and what do you do?
I moved to London for work. But actually the dream of living in another country again came first and then I was lucky to find a job that allowed me to move to London. I'm a marketing manager for an IT company. 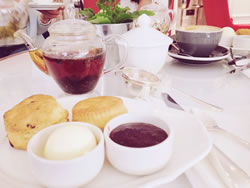 One of the many great things about living in London: afternoon tea
Did you bring family with you?
No, it's just me.

How did you find the transition to living in a foreign country?
I kind of knew what to expect since I've lived in other countries before. It helps that I speak the language (although I need to get rid of the American accent and start working on a British one) and that Holland is just a one-hour flight away. So the transition is going quite smoothly actually.

Was it easy making friends and meeting people; do you mainly socialise with other expats?
It's a bit different from the last time I was living in a foreign country, since I was still in university then so you make friends with other students quite easily. This time it takes a little bit more effort, but London is such an international city with lots of people looking to make new friends that it's not that difficult. Most of my new friends are expats. 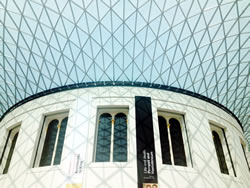 You can visit most museums in London for free.
What are the best things to do in the area; anything to recommend to future expats?
I love the London food markets. There are so many of them, and they're all great to visit in the weekend. And most museums in the city have great collections and are free.

What do you enjoy most about living here?
That you're never done exploring the city. There is so much to do and see here, the food, the culture, it's impossible to get bored. And that I get to meet so many interesting new people from all over the world.

How does the cost of living compare to home?
London is a very expensive city, especially housing costs. My apartment here is twice as expensive as my Dutch apartment, and a lot smaller at the same time. The food prices are higher too, but prices in restaurants on the other hand are usually the same or even less compared to Holland. 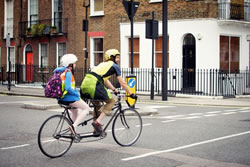 Cycling in London is a challenge
What negatives, if any, are there to living here?
Probably the cost of living, although you quickly get used to that. And that the roads are very unfriendly to cyclists. I'm used to the Dutch cycle lanes and here cycling often feels like a death ride. Of course many people complain about the British weather, but for me it's the same as in Holland.

If you could pick one piece of advice to anyone moving here, what would it be?
Invest time in building your new social life. Join websites like meetup.com and Internations to find events where you can meet new people.

What has been the hardest aspect to your expat experience so far?
The amount of paperwork you have to deal with in the beginning. And figuring out where you can buy things. My first trips to the supermarket took me hours since you're missing all your favorite brands. 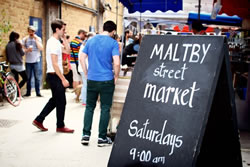 London food markets are the best
What are your top 5 expat tips for anyone following in your footsteps?

Tell us a bit about your own expat blog.
Urban Pixxels is a travel blog where I share stories and photos about my new London life and travels. It often has to do with food....

How can you be contacted for further advice to future expats coming to your area?
You can visit my blog where you find different ways to contact me.