Want to get involved? Become a Featured Expat and take our interview.
Become a Local Expert and contribute articles.
Get in touch today!
Filed: Interviews,Spain
Chelsea is a Buffalo, NY native who is heading into her third year as an English teacher in Spain. Having spent the last two years in AndalucÃ­a, she and her (Spanish) boyfriend will be moving three hours north to MÃ©rida, Extremadura. She blogs about life in Spain, traveling, and navigating the waters of post-grad independent life. Chelsea's expat blog is called AndalucÃ­a Bound (see listing here) 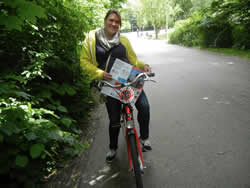 Here's the interview with Chelsea...

In which country and city are you living now?
I'm living in Spain, and I'm on the verge of moving from Arcos de la Frontera to MÃ©rida.

How long have you lived in Spain and how long are you planning to stay?
I've been here for two years and I've stayed for love! I have no exact time line for how long I'll be in Spain, it mostly depends on resolving residency issues and my boyfriend and I finding work, either here or somewhere else!

Why did you move to Spain and what do you do?
I moved after I graduated from university because I knew I didn't want the typical entry-level job in an office, and I didn't want to continue studying towards a Master's degree quite yet. I came to Spain as an English Language and Culture Assistant, which means I work part-time assisting teachers in bilingual elementary schools! 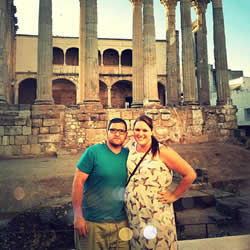 My Boyfriend and I in front of some Roman ruins in MeÌrida, Extremadura
Did you bring family with you?
Nope, I came all alone! I didn't know a single person in Spain when I got here, but two years later and I've made some amazing friends and have fallen in love!

How did you find the transition to living in a foreign country?
The actual transition to living here wasn't so tough. I've always been flexible so adjusting to a new lifestyle was just a matter of giving it some time, though there are definitely parts that still frustrate me. The harder part was knowing that all of my friend and family were back home and going on with life without me. I have terrible FOMO (fear of missing out) so Facebook was like my best friend and my worst enemy all rolled into one.

Was it easy making friends and meeting people; do you mainly socialise with other expats?
My first year here there was a decent group of expats here and we spent a lot of time together, but we also had some Spaniards mixed into our group. This last year, though, there were far fewer expats in my town and I spent a lot more time with Spaniards due to my boyfriend being Spanish and spending a lot of time with his family and friends. 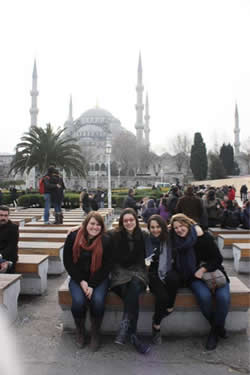 A reunion in Istanbul with some sorority sisters
What are the best things to do in the area; anything to recommend to future expats?
The town where I currently live, Arcos de la Frontera, is a nice quiet pueblo blanco, a white town in AndalucÃ­a. It's really beautiful, and has some stunning churches up in the old town. The old town itself is a sight to behold with it's narrow, winding cobble stoned streets and typical andalusian patios, not to mention the great food that can be found in restaurants like La Carcel. Nearby in Jerez de la Frontera they are famous for the sherry bodegas and horse shows which can be really entertaining if that tickles your fancy.

What do you enjoy most about living here?
I love the relaxed lifestyle and the weather, though of course we all know what they say about too much of a good thing...That being said, I like to travel when I get the chance because I'm eager to see pretty much everywhere. But now when I get back to Spain, it always feels like home.

How does the cost of living in Spain compare to the US?
Spain is a lot cheaper than the US on day to day purchases like groceries, beer, transportation (not gas), and the cost of renting an apartment. Clothing and accessory costs are about the same as in the US and electronics and gasoline are way more expensive in Spain. 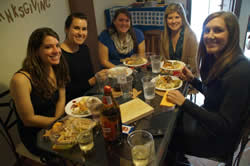 Celebrating Thanksgiving in Spain with some fellow expats
What negatives, if any, are there to living here?
Being away from my friends and family is a negative, but that's obviously to be expected. One negative to living in a small town can be the closed minded and traditional views on many things like customs and food, where I am a really liberal and open minded person. I try to view it as a challenge to educate people about the many different yet equal ways of doing things,

If you could pick one piece of advice to anyone moving here, what would it be?
Be prepared for misunderstandings. Of course with a language barrier they're bound to happen, but I never realized how many misunderstandings there would be due to cultural differences as well. It helps to always ask questions when you don't understand why something is done a certain way. Understanding a reason behind doing something can make it slightly less frustrating.

What has been the hardest aspect to your expat experience so far?
The hardest aspect is planning what's next and dealing with residency issues, which come hand in hand. Being from the US definitely has some disadvantages when it comes to trying to live abroad long term. Can't I just be a citizen of the world? ;)

When you finally return home, how do you think you'll cope with repatriation?
I would like to return home one day with my boyfriend. If we ever had kids, I'd want to raise them there. Of course this is a discussion for the future that we haven't spent much time talking about. I think I'd cope with repatriation well because I do miss home a lot and I still identify as wholly American, just an American living abroad! Though I have a feeling I'd turn into that annoying friend who's always saying things like "When I lived in Spain..." 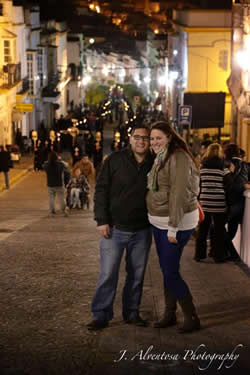 Us at the Semana Santa processions in Arcos de la Frontera
What are your top 5 expat tips for anyone following in your footsteps?

Tell us a bit about your own expat blog.
My blog started as a way for me to document my time spend studying abroad in 2009 and has grown into a place where I reflect on my experiences in Spain, my travels, and where I give advice and tips about moving abroad and specifically about the English Language and Culture Assistants program that I am a part of.

How can you be contacted for further advice to future expats coming to your area?
I can be contacted through the contact form on my blog and through Twitter (see links below) or Instagram (@andaluciabound).