Want to get involved? Become a Featured Expat and take our interview.
Become a Local Expert and contribute articles.
Get in touch today!
Filed: Interviews,Czech Republic
Kevan is a former graphic designer who, partly for career change reasons, relocated to the Czech Republic in 2004 and became an English teacher. Meeting a significant number of foreigners who visited the Czech Republic but unfortunately never set foot outside of Prague, in combination with being badgered for the better part of a year by a British friend to take up blogging, was the primary catalyst in Kevan's decision to create a blog about the Czech Republic with little to no focus on Prague. His hope is that it will encourage foreigners to explore the Czech Republic further afield than the capital. When not in the classroom or writing his expat blog called Beyond Prague (see listing here); Kevan enjoys visiting museums and historic sites, a good cup of coffee, taking pictures, taking day trips and writing in his other blog which focuses on another major field of interest for him; aviation. 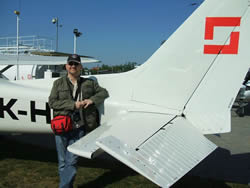 Here's the interview with Kevan...

In which country and city are you living now?
I'm currently living in Brno, Czech Republic.

How long have you lived here and how long are you planning to stay?
I've been in Brno for a little over nine years and have no plans to leave any time soon.

Why did you move and what do you do?
I moved for a variety of reasons, not the least of which is my girlfriend.

I needed changes in life; mainly I was ready for a career change. I had been a graphic designer in Canada but I wasn't sure exactly what I wanted the next step to be; I knew a few people who had gone abroad to teach English and quite enjoyed it so I thought it would be a good thing to try.

I've been teaching English for the entire time I've been in the Czech Republic and find it challenging in many ways, but quite satisfying in others. 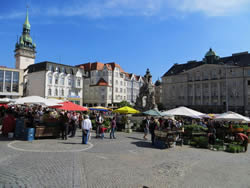 Brno's popular vegetable market, a tradition older than the city itself.
Did you bring family with you?
No

How did you find the transition to living in a foreign country?
I think coming from a multicultural country made it fairly easy to adjust to things like food because there are so many types of ethnic cuisine easily available in Canada, including central European cuisines, that there was really no adjustment period in that regard.

The most difficult aspect of the transition, for me, was the typical Czech standoffish nature to all but their closest family and friends. Typically, a Czech won't approach you and offer help if they see you lost on the street and trying to figure out a map; you'll need to approach them.

Very often I've heard foreigners and Czechs using the word "Xenophobic" to describe what is, in many cases, just a bit of aprehension at having a stranger in their midst. I'm very careful not to apply the word to the Czechs, not only because I feel in most cases it is gross overstatement but also because in the time I've been here and had adequate time to observe Czechs interacting with each other, I've noticed they can be every bit as unhelpful and aloof to each other as they can be to foreigners. A strong sense of community simply does not seem to be in the Czech national psyche.

This is, of course, not to say the Czechs are unfriendly; but that it does take time to get to know them and they aren't the sort of culture that throws the word "friend" around lightly and without forthought. 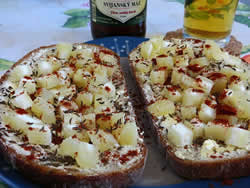 TvarÅ¯Å¾ky cheese, seen here on bread, is a protected Czech delicacy
Was it easy making friends and meeting people; do you mainly socialise with other expats?
It wasn't difficult to make Czech friends and acquaintences once I secured employment.

I think I socialise with Czechs and expats in equal measure just by the nature of my teaching job, I have a lot of both around me. I've never really gone to any special efforts to seek out other expats.

What are the best things to do in the area; anything to recommend to future expats?

If you're fond of wine, then South Moravia will certainly appeal to you. Czech wine has a very good reputation and has won many international awards. The towns of Znojmo and Mikulov both have wine festivals where you can sample many types of wine. South Moravia is also, arguably, one of the most beautiful areas of the country.

The VysoÄina highland region, in the south central part of the country, is a year round idylic paradise for outdoor types. Full of hiking and cycling trails through spring, summer and autumn; the region remains popular through winter with many nordic skiing areas. 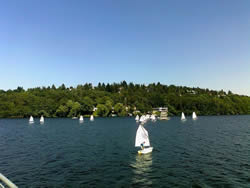 Brno reservoir, a very popular outdoor recreation area in the spring and summer months
What do you enjoy most about living here?
I like the slightly slower pace of life here.

I also like that things are closer together here. Unlike Canada, where everything is so far apart, it's possible to take a day trip here and actually have it only take a day. Public transit options, train and coach, are very good here and can cheaply and efficiently get you almost anywhere you'd care to go.

How does the cost of living compare to home?
Public transportation is a great deal cheaper here than back home. Typically a trip to a restaurant is also cheaper, most restaurants have a daily lunch menu where you can get soup and a good meal for very agreeable prices. A trip to the supermarket can also be more cost effective here than at home.

Most expats are immediately struck by how cheap Czech beer is compared to beer prices in their homelands. If you like beer, you should spend some time getting to know which of the Czech beers are truly good; low prices are no excuse for drinking bad beer.

What negatives, if any, are there to living here?
The Czech tendency to complain a lot is certainly one detraction.

The Czechs are not a very cohesive society so you don't see them take to the streets en masse very often, or in any meaningful way, to protest the things they complain about. As such, things don't change much and the Czechs keep complaining.

If I was given the power to change one thing about the Czechs, it would be that aspect of the national character. 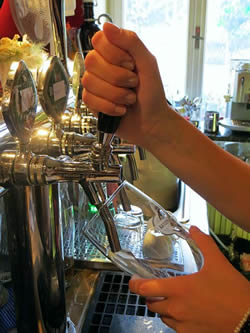 Beer and the pub, inextricably woven into the Czech cultural fabric since years had three numbers
If you could pick one piece of advice to anyone moving here, what would it be?
Make Czech friends as quickly as you can! You'll need them to help you with the bureaucratic process if you don't speak any Czech.

The Czechs are keenly aware of how difficult it is to navigate their bureaucratic offices and are usually quite sympathetic to anyone who has to do so. Having a few Czech friends who are willing to call offices on your behalf and visit them with you to act as translators, don't expect Czech office workers to speak anything but Czech, will save you a lot of headaches.

There are agencies around to help expats with such things, but they vary in quality and are paid services. If you're watching your money, having a few willing Czech friends will also make the bureacratic process more manageable financially.

What has been the hardest aspect to your expat experience so far?
Beyond the aforementioned bureaucracy, I think learning the language certainly rates highly in this regard.

Czech is a complex language with a huge vocabulary and intricate grammar system. Unless you have a natural talent for learning languages, it will take a lot of time and patience to speak it at a functional level.

I'm still very self-concious about my own command of the language even after nearly a decade of living here.

From a linguistic flexibility standpoint, Brno has improved quite a bit since I arrived in 2004. It still has a long way to go and functional Czech language skills will, for the forseeable future, still be essential for any foreigner who plans to come here for an extended length of time.

When you finally return home, how do you think you'll cope withrepatriation?
I have no immediate plans for permanently returning to Canada.

Tell us a bit about your own expat blog.
Beyond Prague, as the name suggests, is about places in the Czech Republic other than the capital city. I've nothing against Prague, but it needs no help in being promoted to the world.

I've met many people who have visited the Czech Republic but barely if at all ventured outside of Prague, this is really a pity as the country does have so much more to offer. Beyond Prague is where I do my bit to help other parts of the country shine.

Of course, I also include sections on Czech cultural aspects, cuisne and so forth to create a more rounded picture of things here.

How can you be contacted for further advice to future expats coming to your area?
Via Twitter KevanVogler or my blog (see links below)

Thanks Kevin. It is definitely interesting and valuable to have a viewpoint outside of Prague. I also lived in Ireland for several years and typically had to exclude Dublin from any descriptions that applied to the rest of Ireland.