Want to get involved? Become a Featured Expat and take our interview.
Become a Local Expert and contribute articles.
Get in touch today!
Filed: Interviews,Spain
Allison is a food and travel blogger originally from Denver, Colorado. After graduating from Kansas State University with degrees in Spanish and Theater in 2011 she moved to Spain for a yearâ¦..and has been here ever since. She travels every chance she gets and can often be seen window shopping in the city food markets. Allison's expat blog is called A Foodie in Europe (see listing here) 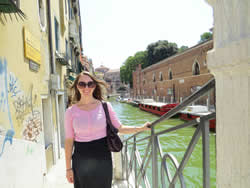 Here's the interview with Allison...

Where are you originally from?
Denver, Colorado

In which country and city are you living now?
Valencia, Spain

How long have you lived in Spain and how long are you planning to stay?
I recently moved to Valencia after 2 years in Almeria. Iâm here for the foreseeable future.

Why did you move to Spainand what do you do?
I moved to Spain right after graduating from Kansas State University to do the North American Language and Cultural Assistant program in Almeria. After 2 years in that program I decided to move to Valencia, my favorite city in Spain, and have been here ever since working in an English academy.

Did you bring family with you to Spain?
Nope. I came alone, although, my parents have been here to visit twice. 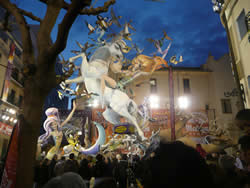 From Valencia's most famous festival, Las Fallas.
How did you find the transition to living in a foreign country?
I found it really easy. It surprises me sometimes when I think back to how comfortable I felt right away. Of course, things were different but going in with an open mind definitely helped.

Was it easy making friends and meeting people; do you mainly socialise with other expats?
That question for me depends on the year. I met so many people from all over the world my first year in Almeria, but very few Spanish people. When I moved to Valencia, I moved in with my boyfriend (who is from Palestine) so most of the people I met were expats, but I do have more Spanish friends here than I did in Almeria.

What are the best things to do in Valencia; anything to recommend to future expats?
I LOVE spending time in the Turia Gardens, which is a former river bed, turned open space. It runs all through the city. Itâs such a beautiful open space which is great for riding bikes or eating a picnic. I go there at least once a week.

What do you enjoy most about living here?
The size of Valencia is perfect for me. Itâs big, but not too big. I can walk to the center from where I live in about 30 minutes and be at the beach in 10. Itâs great! Also, this city is beautiful! 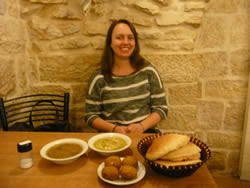 In Bethlehem, Palestine. The best falafel I have ever had!
How does the cost of living in Valencia compare to Denver?
So much cheaper! The food is so cheap and locally produced. My apartment is huge; I think one of comparable size in Denver would be at least double the price. Also, being able to easily live without a car makes the cost of living significantly lower!

What negatives, if any, are there to living here?
There arenât many that I can think of. One thing that still bothers me is the stores closing mid day.

If you could pick one piece of advice to anyone moving to Spain, what would it be?
If you donât speak Spanish, sign up for a class right away. The Spaniards are so warm and welcoming and being able to speak to them will help you fit in.

What has been the hardest aspect to your expat experience so far?
Finding friends who are here longer than a year. I have made some great friends from all over the world, but most of them have gone back to their home countries. Luckily, now that I am settled in Valencia itâs better. 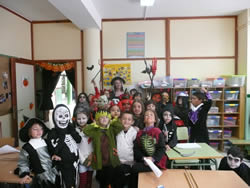 Me and one of my 1st grade classes on Halloween
When you finally return home, how do you think you'll cope with repatriation?
Iâm still undecided on whether I will return home. But, if I do, I know it will be difficult. I think just finding a job and making friends right away will help a lot. 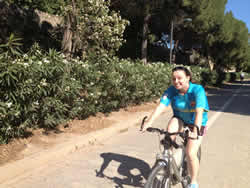 On the way to feed the ducks in the Turia Gardens
Tell us a bit about your own expat blog.
My blog, A Foodie in Europe, is about my travel and food adventures in and around Europe. It has travel stories, food stories and the occasional recipe. Since I was a Language Assistant for 2 years, it has some posts that I think are helpful for people doing that program and also for first time expats.

How can you be contacted for further advice to future expats coming to your area?
I can be contacted via my blog.

Allison is an American expat living in Spain. Blog description: Allison is a 24 year old English teacher from Denver, Colorado who is currently trying to figure out the expat life in Valencia, Spain. Follow her foodie and travel adventures in and around Europe!

I thought the article was so positive next to some negative blogs written by expat Brits I've been reading lately. Of course none of the negative ones weren't from expats in Valencia....to my knowledge. My wife and I are planning to become expats ourselves relocating to Spain. Allison gave us new found hope about living in Spain. I wonder how the Spanish feel towards Americans as opposed to the Brits. Allison, if you happen to see my response here and wouldn't mind getting in touch with us, it would be greatly appreciated. Or anyone else living in Valencia for that matter. We have questions to ask you regarding life in Valencia...........rents...........expenses.....phone lines........internet, etc. Thank you in advance