Want to get involved? Become a Featured Expat and take our interview.
Become a Local Expert and contribute articles.
Get in touch today!
Filed: Interviews,Spain
Ocean is a kiwi born travel enthusiast, living in Madrid on an internship with the United Nations World Tourism Organization. Having spent the last four years living in various locations globally (US, Canada, Spain, NZ), she likes to share an outside perspective on the arts and culture of various destinations and reviews local events. She is most excitable about outdoor sports and photography. Ocean's expat blog is called An Ocean Away (see listing here) 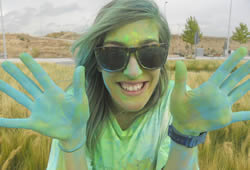 Here's the interview with Ocean...

Where are you originally from?
Im from the Bay of Plenty in New Zealand

In which country and city are you living now?
I am living in Madrid, Spain.

How long have you lived in Spain and how long are you planning to stay?
I have lived here for 4 months, and plan to move to London in 1 month.

I've taken a liking towards all the great street-art in Madrid
Why did you move to Spain and what do you do?
I moved to Madrid for an internship with the United Nations World Tourism Organization (UNWTO). This involved working on the Global Reports on Shopping Tourism and the Meetings Tourism Industry.

Did you bring family with you?
No. Sole ranger! I miss them a lot but some opportunities just can't be missed!!

How did you find the transition to living in a foreign country?
Initially the whole culture-shock stage was really difficult. While I've lived overseas before, this was the first time I have lived in a non-English speaking country. There were a few awkward situations where I couldn't communicate and got so frustrated I would go home for a wee cry, but equally, some of these miscommunications were hilarious (like asking a waitress where my chocolate CAT was thinking 'gato' meant cake). 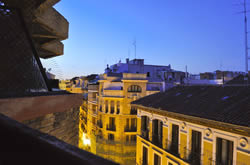 View of Madrid's beautiful streets from my apartment balcony
What are the best things to do in the area; anything to recommend to future expats?
My favourite things in Madrid that aren't so commonly mentioned in guidebooks include:Visiting the Roof-top bar at Hotel de las Letras.Going dancing at El Son Salsa ClubGoing to see Atletico Madrid play! While they aren't the world famous "Real Madrid", they are seemingly the PEOPLES team, and very very good. The crowd generally seems a little wilder and the atmosphere is somewhat louder!

What do you enjoy most about living in Madrid?
I love how Madrid lives its life on the street. Eating outdoors, drinking outdoors, socializing outdoors it all makes living in a big city seem more personal and fun! The people here are so social and they stay out drinking, talking and dancing until all hours of the morning. Most of the friends I've made here spend more time out than at home and it certainly makes the transition easier if you're amongst this atmosphere.

How does the cost of living in Spain compare to New Zealand?
Compared to New Zealand rent is fairly similar (when converting the Euro to NZD). However food is far cheaper, and going out for a drink is far cheaper. Where a nice bar in NZ would charge around 4-5 for a glass of wine, you can easily get one here for 2.50.

What negatives, if any, are there to living in Spain?
The only one for me is not being able to easily escape the entrapment of a big city. While Retiro Park offers luscious green scenery, the city itself is huge and sprawling which is a vastly different feeling to the calm quietness of New Zealand. Also being such a big city compared with what I'm used to (Wellington, NZ where you can walk ANYWHERE), I have to metro everywhere which gets frustrating. 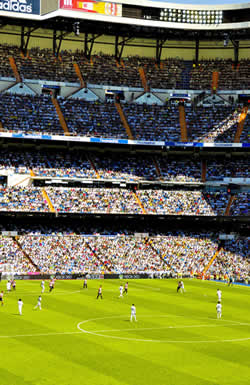 You haven't experienced Madrid until you've watched Real Madrid play at the Santiago Bernabeu
If you could pick one piece of advice to anyone moving here, what would it be?
Put as much effort into learning the language as you can before arrival. Every new word you learn will literally enhance your quality of life. There's nothing worse than feeling helpless and misunderstood!

Tell us a bit about your own expat blog.
My blog focuses less on "how to get settled, and what to expect" and more on fun activities and events to attend. I like to focus on things that are relatively unknown (where possible) and emphasize all this with bright colorful images! Id say my content targets young independent travelers interested in the arts and culture of destinations.

How can you be contacted for further advice to future expats coming to your area?
Please do contact me. I love hearing from people. You can comment on my blog or follow me on Twitter (see links below).