US Expat Living in Sydney, Australia - Interview with Lauren

Want to get involved? Become a Featured Expat and take our interview.
Become a Local Expert and contribute articles.
Get in touch today!
Filed: Interviews,Australia
Lauren is a former Seattle-ite now living happily as a Sydney-sider. She has a Bachelors Degree in Neurobiology from the University of Washington and once worked as a research assistant at several biotech startups. Lauren is now the owner and curator of Sydney Moving Guide where she helps others relocate to Sydney, Australia. She loves shopping on the weekends at the various farmerâs markets around Sydney and will never say no to Yum Cha at Sydneyâs Fish Markets. Lauren's expat blog is called Sydney Moving Guide (see listing here) 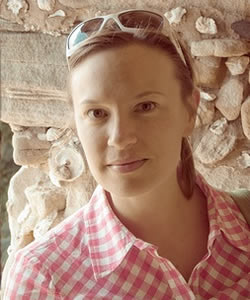 Here's the interview with Lauren...

Where are you originally from?
Seattle, Washington USA

In which country and city are you living now?
I now live in Sydney, Australia

How long have you lived here and how long are you planning to stay?
We moved to Sydney in 2008. In 2012 we renewed our 457 temporary visa for another four years. Not sure if we will stay that long or maybe, even longer.

Why did you move to Sydney and what do you do?
A recruiter contacted my husband about a position with an American company that had an office in Sydney. After several interviews and very long discussions at home we decided to make the move down under.

I am the owner and curator at Sydney Moving Guide, a website I developed specifically for expats moving to Sydney. I also write for many other blogs about living in Sydney and traveling in Australia and other parts of the world. 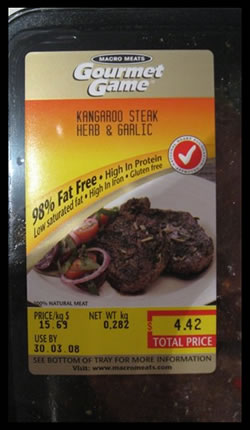 Kangaroo for dinner anyone?
Did you bring family with you to Australia?
Itâs just the two of us which made the move a no brainer. With kids and pets things become more complicated. We also didnât own a house or really much of anything that we couldnât live without. One of the reasons we thought ânow is the timeâ if we want to experience living abroad.

How did you find the transition to living in a foreign country?
Living in Sydney has been wonderful, a very easy transition from the States. There are many other expats from all over the world making it easy to make new friends and settle into life. Not having a language barrier makes it even easier, even though I still get lost when someone uses a new Aussie slang term I havenât heard before.

Was it easy making friends and meeting people; do you mainly socialise with other expats?
Meeting people and making friends in Australia is not difficult at all. Just find your local pub or coffee shop and be ready to strike up a conversation.

As I mentioned above, Sydney has a large population of expats from all over. There are several expat groups in Sydney that meet regularly from just about every country. These groups are a great way to break the ice and jump start your social life.

Majority of our friends are expats but many have gone on to become Australian citizens so I guess technically I can count them as Aussies. Even so we would still have more expats as friends than Aussies. 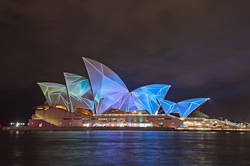 Sydney opera house
What are the best things to do in the area; anything to recommend to future expats?
Oh man there is so much going on in Sydney. So much to see and do. I often feel more like a tourist on the weekends than an expat that lives in Sydney. Walking around The Rocks or going Whale Watching, it just never gets old or seem ânormalâ.

If there is just one thing I would recommend doing in Sydney it would be exploring all the scenic walks around the city. There are hundreds of different walks in the city, from along the inner harbour to the eastern coastline. Some amazing scenery and wildlife, itâs hard to believe youâre still in a major metropolis.

What do you enjoy most about living in Sydney?
All the festivals happening throughout the year and most are free or have free events. The biggest has to be the Sydney Festival that starts the year off in January. Sydney Festivalâs first night is huge and should not be missed. But I have to admit, my favourite festival is Vivid Sydney that happens in June. For about two weeks the Opera House is a blank canvas for a light display. There are other light displays around the city but the Opera House is the main draw. Each year Vivid Sydney gets better and better. 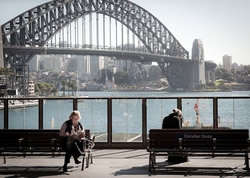 Sydney's Circular Quay Station taken on my way to work
How does the cost of living in Australia compare to the US?
Sydney is much more expensive than Seattle in almost every way. I still get sticker shock when out shopping. Doesnât matter if itâs for food, shoes or books.

What negatives, if any, are there to living in Australia?
Australia feels so far away. That flight back home is brutal. The funny thing about it now is a 10 hours flight to say Bangkok or Honolulu seems like nothing. Thatâs just crazy.

If you could pick one piece of advice to anyone moving to Australia, what would it be?
Do your best to not take anything with you other than the suitcase you take on the plane. I know that sounds harsh but after waiting for what felt like forever for our shipment I didnât even want any of it anymore. If youâre moving for a job and the company is helping pay for your move then sure take advantage of the opportunity and take a few things. Just remember if youâre only going to be in Sydney temporarily, youâre probably going to have to pay to ship it all back.

What has been the hardest aspect to your expat experience so far?
The distance between Sydney and home. When missing friends and family, that distance is not just in terms of miles but also time as itâs hard to connect with people back home when youâre a day ahead and your morning is their evening. Though with things like Facebook and Skype itâs not too bad but I would still want a Transporter like the one they have in Star Trek.

When you finally return home, how do you think you'll cope with repatriation?
I bet weâll just fall back into everyday life like we never left. We really havenât been gone for that long and visit enough that it wonât seem too strange. But who says weâre going back? We canât travel somewhere without having at least one conversation about possibly living there. We even check out real estate prices once in a while. Being an expat is addictive. 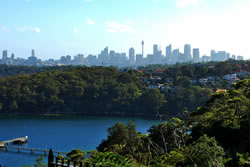 View of Sydney taken while hiking in the city
What are your top 5 expat tips for anyone following in your footsteps?

Tell us a bit about your own expat blog.
I started the website Sydney Moving Guide (see link below) for completely selfish reasons. Itâs exactly what I want when I was moving to Sydney in 2008. I wanted someone to give it to me straight. âDonât pack that you wonât need it. Donât bank there, theyâre terrible. Go here instead. This is the best way to transfer your money. How do I know? Because I did it yesterday and, hey look, itâs already in my account.â

An international move is incredibly stressful. There are so many moving parts and unknowns. You can spend hours online reading blogs and going through forum posts but still never feel satisfied with the information. If I can take away some of that stress, itâs all worth it.

How can you be contacted for further advice to future expats coming to your area?
Iâm everywhere. Facebook: http://www.facebook.com/sydneymovingguide Twitter: @sydmovingguide Google+: https://plus.google.com/u/1/b/115290254517554482853/+Sydneymovingguide/posts

The best way is through SMG where I have a contact form. I always answer those emails first. http://sydneymovingguide.com/contact-me/

Lauren is an American expat living in Australia. Blog description: Are you moving to Sydney? The Sydney Moving Guide is written by expats for expats. All the information you need in one place.