Want to get involved? Become a Featured Expat and take our interview.
Become a Local Expert and contribute articles.
Get in touch today!
Filed: Interviews,Korea South
Karli is a Canadian expat in South Korea, returning for a second time after an eight-year absence. Since being back in Korea, she has achieved many goals including practicing martial arts (hapkido), starting her own blog, learning a new language and traveling Asia. Karli plans to stay in Korea for 2-3 years and build up her ESL teaching resume while sheâs here. Sheâs not sure whatâs in store after Korea, but thatâs what she enjoys most about life: The never-ending surprises. Kari's expat blog is called Karli in Korea (see listing here) 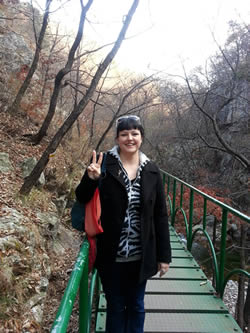 Here's the interview with Karli...

Where are you originally from?
Toronto, Ontario Canada.

In which country and city are you living now?
Namyangju city in Gyeonggi province, South Korea.

How long have you lived in South Korea and how long are you planning to stay?
Iâve been here 11 months and I intend to stay at least another year, possibly longer.

Why did you move to South Korea and what do you do?
I moved here to teach English again and continue exploring Korean culture. I used to teach at a private academy but now Iâm a public elementary school teacher.

Did you bring family with you?
No. 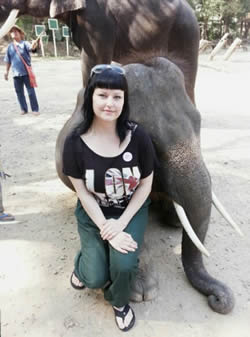 At an elephant conservation camp in Chiang Mai, Thailand.
How did you find the transition to living in a foreign country?
This is my second time living in Korea so the transition wasnât too difficult. I lived here back in 2005 and have missed it since I left so coming back felt really good!

Was it easy making friends and meeting people; do you mainly socialise with other expats?
When I was here in 2005 I made friends by meeting the friends of the teacher I was replacing at her good-by party. This time, there was no over-lap between myself and the former teacher so I resorted to joining some social networking groups on facebook. It was easy to make friends once I started attending events posted in the group threads. The people Iâve made friends with have been a mix of Koreans and expats.

What are the best things to do in the area; anything to recommend to future expats?
Namyangju is a big city with lots of historical sites and plenty of walking trails and mountain hiking. For nightlife though, most people commute into Seoul. 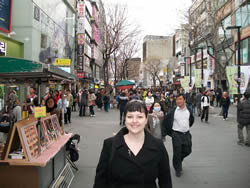 Shopping in Insadong, a famous neighborhood in Seoul.
What do you enjoy most about living here?
I enjoy my job because my kids inspire me every day. I came back to further study a second language so I enjoy being able to practice what Iâve learned at any time. Itâs also nice when you want to zone out on the subway because everyone around you is speaking in a language you donât understand. Iâm sure when and if my Korean improves that bliss will diminish.

How does the cost of living in South Korea compare to Canada?
Because of my job, my housing is paid for, which brings my cost of living down a lot. As far as monthly bills and groceries, itâs cheaper than Toronto for sure, but I donât buy a lot of meat or diary. Diary like cheese and cream cheese is expensive so if youâre into your cheeses, get ready to spend mad cash on that lactose.

What negatives, if any, are there to living in South Korea?
Some negatives of living in Korea are that it can often be isolating here if you live far from other expats. Thatâs where the facebook social groups come in handy but some may find they have to put themselves out there a little more than theyâre used to back home in an effort to connect with other expats.
Another negative can be the xenophobia some older Korean people show towards expats. There are some older Koreans who donât think we should be here or refuse to communicate if the expat doesnât speak Korean. This can happen at your job and just on the street. This is not the general consensus of the people but it still stings when it happens. That can make things hard but if you show a general interest in the culture and learn some small key words, it usually breaks the ice. 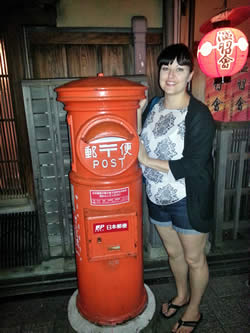 Strolling through the Gion district of Kyoto, Japan, where the geishas once thrived.
If you could pick one piece of advice to anyone moving here, what would it be?
My advice to anyone moving here would be to practice learning to read hangul (itâs pretty easy if you give a real go) and learn a couple words to get you started. It goes a long way with more people than you know. For example, I would learn: hello, thank-you, how much is this, and numbers for counting currency. Also, Koreans are painfully honest sometimes and usually they are saying things because they care, not to be mean. So if someone tells you that you look sick or tired, itâs because theyâre concerned, theyâre not trying to be rude.
If youâre planning on teaching English and hope to work at a public elementary, middle or high school, youâd better hurry up because the government is phasing us out of the the country. They want expats out of all public schools by 2016 so if youâre debating to come over, now is the time. There will always be private academy jobs, but stability is less and itâs a business first, not a school. Your experience will depend heavily on whether or not your boss likes you and if they are good at running said business.

When you finally return home, how do you think you'll cope with repatriation?
The first time I went home repatriation was really difficult for me and I hope itâs not that way again. I felt very out of place and stuck between two worlds, in part because I felt I left Korea sooner than I wanted to. I hope the next time I repatriate it will feel easier because this time Iâll go back when Iâm fully ready to start the next chapter of my life. 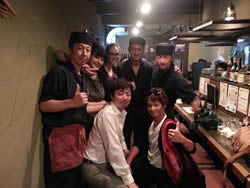 New friends at Tenkadori, in Kyoto.
What are your top 5 expat tips for anyone following in your footsteps?

Tell us a bit about your own expat blog.
Karli in Korea is about my wanderings in Korea and all over. I write about trips Iâve been on to historical sites around Korea, things happening around Seoul, things about teaching and also about travel. Since coming to Korea Iâve traveled to Colorado, USA, Tokyo and Kyoto, Japan and Chiang Mai, Thailand. I write about my adventures in travel and just in everyday life.

How can you be contacted for further advice to future expats coming to your area?
People can reach me at https://www.facebook.com/pages/Karli-in-Korea/140930586087828

Karli is a Canadian expat living in Korea South. Blog description: This blog is about the things I find interesting about life in Korea. I also have travel articles when I get the opportunity to take a trip, but most posts relate to my experiences back in Korea afer a nine years away.