Want to get involved? Become a Featured Expat and take our interview.
Become a Local Expert and contribute articles.
Get in touch today!
Filed: Interviews,Switzerland
I'm an American pastor, author of several books, a popular blogger in the U.S, a runner, a husband, a father of two daughters, and as of October a grandfather.I write about faith, life, culture, and more. In January 2014 I embarked on the adventure of a lifetime and moved to Zurich, Switzerland. Doug's expat blog is called Doug's Blog - Musings about faith, life, culture (see listing here) 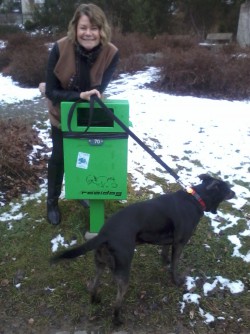 Here's the interview with Doug...

Where are you originally from?
Iâm from the U.S., most recently from South Florida, but have lived in the Midwestern and Northeastern United States as well. Michigan is where I was born, and where my extended family lives, and where I go for vacation every summer.

In which country and city are you living now?
Iâm living and working in Zurich, Switzerland. Actually, my wife and live in Obermeilen, a small village near Zurich on the lake, a 12-minute train ride from where I work.

How long have you lived in Switzerland and how long are you planning to stay?
My wife and I moved to Zurich in January 2014. My contract calls for a three-year stay, but we could extend. 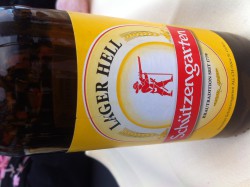 Beer in Switzerland is not as bad as the label suggests
Why did you move to Switzerland and what do you do?
Like many expats, I moved because I was offered a job in this country, but the truth is, Iâve been dreaming of a move like this since I was five years old. And like so much else in my life, I blogged about itâ¦http://www.dougsblog.org/2013/10/09/wandering-aramean-father-deuteronomy-265/

Did you bring family with you?
My wife has indulged this dream of mine by coming with me. Our two girls are grown and launched and enjoying careers in the U.S. â one in St. Louis and the other in Seattle. I can imagine that bringing children would increase the degree of difficulty many times. Just getting a dog over here has been a bit of a challenge.

How did you find the transition to living in a foreign country?
Right now weâre finding it fun and exciting. The beginning of an adventure presents challenges with train travel, banking, cable TV, etc., of course, but mostly these challenges are learning opportunities. I suspect, given the experience of other expats over the years, that there will be a time when the honeymoon comes to an end. But for right now, itâs all good â and when itâs not good, itâs at least interesting.

Was it easy making friends and meeting people; do you mainly socialise with other expats?
Unlike many expats, I came to this country with a built-in set of relationships, which is to be expected with a church job. Many church members are themselves expats, but many are not. Iâve probably met and gotten to know more Swiss Germans than the typical newly-arrived expat in Switzerland. At some point, because it will be healthy for us to do so, weâll want to have some friendships not related to my church. With more than 20 percent of the population from places other than Switzerland, the Swiss are (mostly) accustomed to people like me. 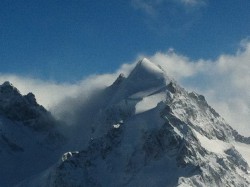 The skiing can be intimidating; I couldn't find the bunny slopes
What are the best things to do in the area; anything to recommend to future expats?
Iâd say, Explore, explore, explore. And beyond that, treat every outing â even if itâs to open a bank account â as if it were an adventure. On my day off I like to have a plan, get up early, and go.

What do you enjoy most about living in Switzerland?
Every place weâve lived has had its enjoyable features. When I lived in South Florida, I enjoyed fishing in the Everglades and sailing in the Keys. Here, obviously, the attraction is obviously the mountains. Iâm still trying to decide if a 60 year old man with his joints mostly intact should take up downhill skiing.

How does the cost of living in Switzerland compare to home?
I always seem to move to places that are more expensive than the previous place I lived, so was prepared for yet another jump up in the cost of living. But Zurich is one of the five (or is it three) most expensive cities in the world. To quote Neil Armstrong, itâs been âone giant leap for mankind.â My wife and I wonât be eating at many local restaurants. 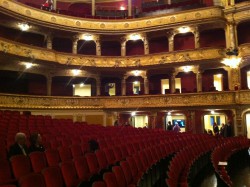 Visiting the Zurich Opera House was a dream come true
What negatives, if any, are there to living in Switzerland?
Besides the cost of living? I donât have any other complaints yet, but you could check back in another six to nine months. I was warned about how reserved Swiss Germans could be, but have found just the opposite to be true, even in our apartment building.

If you could pick one piece of advice to anyone moving to Switzerland, what would it be?
Donât move any more household goods than you absolutely must have because most expats leave behind a great deal of their belongings when they move on. And that means weâve been able to find a great deal nearly-new or gently-used stuff for our apartment.

What has been the hardest aspect to your expat experience so far?
The language. All of the languages Iâve learned along the way â ancient Hebrew, Greek, and Latin â are languages that no one speaks anymore. So, my language training to date has been in reading not in listening and speaking. And Switzerland requires religious types like me to acquire a fairly high proficiency in German in the first year of our residency. How do say âat least two nights per week in language schoolâ?

When you finally return home, how do you think you'll cope with repatriation?
I donât know. Thatâs a question I hadnât thought to ask. I suppose Iâll be irritated by all the ways the U.S. lags behind in the rest of the world. Would it really be so hard, for example, for Americans to recycle their shopping bags at the grocery store? 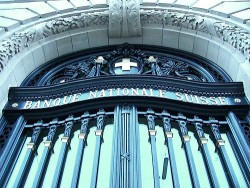 One of the most interesting early experiences was finding a Swiss bank willing to take money from an American
What are your top 5 expat tips for anyone following in your footsteps? Tell us a bit about your own expat blog.
Moving has been great for my blog traffic! I had a decent-sized audience for my blog before I came to Switzerland, and I seem to have taken most of my readers with me â and added a few more. I still blog about topics that I blogged about before the move, but my new expat themes have added some sizzle to the blog. Highest traffic this month was to a post about my new Swiss bank account.

How can you be contacted for further advice to future expats coming to your area?
Iâd welcome contacts. My blog has a feature which invites email contact with me. Just go to dougsblog.org. The contact is private (or as much as anything is on the Internet).

After four years in Zurich, I retired and moved back to the U.S., not expecting to see Zurich or even Europe ever again. But the expat life finds its way into one's heart, and I am now back in Switzerland - in Lucerne this time - for four months of work.Â

Re-reading my interview from all those years ago makes me cringe a bit. I was over the moon to be in Europe, to be experiencing the expat life, but I am nevertheless glad to have enjoyed it so much. If I were to update the interview, knowing what I know now, I would keep all the respect and wonder I felt for Swiss life, but tone it down considerably. The Swiss can be irritating too. Due to changes in banking laws, to give just one example, my PostFinance account was closed soon after I left the country, but several financialÂ transactions were incomplete at the time, such as the return of the securityÂ deposit for my apartment. The seemingly abrupt closing of my account created some problems which I am still working to resolve. I am still glad I came to Switzerland, but I am more sober now. It's not all fun and games.

Doug is an American expat living in Switzerland. Blog description: I'm an American pastor, author of several books, runner, husband, father of two daughters, and I write about faith, life, culture, and more.