Want to get involved? Become a Featured Expat and take our interview.
Become a Local Expert and contribute articles.
Get in touch today!
Filed: Interviews,Japan
Frank is a Dutch ex professional poker player turned entrepreneur who recently moved countries for a 2nd time in 2 years to start fresh yet again. This time leaving London behind to move to the world's biggest megacity: Tokyo, Japan. He blogs about all things awesome about Japan, learning Japanese, various business projects, fitness, trips throughout Asia and life in general. Frank's expat blog is called Frank Peelen's blog about life in Japan (see listing here) 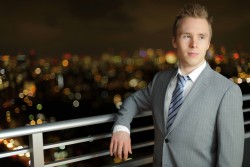 Here's the interview with Frank...

Where are you originally from?
I was born in Amsterdam, capitol of The Netherlands, and lived there until my 22nd birthday.

In which country and city are you living now?
I currently live in Tokyo(æ±äº¬), Japan.

How long have you lived in Japan and how long are you planning to stay?
I moved to Tokyo in August of 2013 and I'm fairly confident I'll stay in Japan for the rest of my life.

Frank Peelen with friends
Why did you move to Japan and what do you do?
I originally gained an interest in Japan thanks to my love of Sushi. Early 2012 I finally decided that was the year I would visit Japan, so I started learning some Japanese by myself and towards the end of 2012 I traveled around Japan for 6 weeks. I basically had the time of my life and 2 weeks into the trip I remember laying in an onsen(hot springs) at night and thinking I may want to live here.
I went back to my home in London at the time, but I didn't stay there for long. Within 2 weeks of being back I booked another 3 month trip Japan, moved out of my apartment in London and flew back. During those 3 months I tried to simulate what it would be like living in Japan as best as I could. I went to the gym, worked and studied Japanese. For the first month I wasn't really sure what I wanted to do and I was swaying back and forth a little, but during my 2nd month I decided I did want to move, so I started the process of setting up my own company in Japan and applying for an investor visa. I went back for about a month during the summer of 2013, but since I moved to Japan at the start of August, I haven't been back to my home country Holland nor London yet.
The reasons that made me decide to move to Japan are:
-The people. They're all extremely friendly and I get along really well with Japanese people.
-The food. This reason alone may have been enough to make me move. I love food and Japanese food is the best on the planet hands down.
-The culture/atmosphere. Japan is an awesome place to live for a couple of reasons. First of all, it is extremely safe. There is no place on earth where I feel as safe as Japan. The best way to illustrate this point is the fact that it's not that uncommon to see 8 year old(if not younger) elementary school kids in the subway on their own commuting to school in the biggest city in the world, the 36 million people megacity called Tokyo. Besides the safety I really like the fact that Japan is often more about cooperation than competition and people seem to care more about each other than in the west. Overall I just feel at home than I do in the west.
-Tokyo itself. It's an absolutely amazing city, although city may not be the right word. Tokyo's city center alone almost feels like an entire country. It is so large and within Tokyo's city center there are so many areas and big train stations that are basically cities each with their own distinct feel and atmosphere, that it honestly feels like living in a country with many exciting cities you can travel to within half an hour. On top of that the public transportation is the absolute #1 in the world and it is super easy to go anywhere even outside of the city center.
Before I came to Japan I worked as a professional poker player in London for 2 years. However, when I moved to Japan I decided I wanted to try something new. I had always been interested in business/entrepreneurship and it just so happened that starting my own company was a very easy way to acquire a visa to live in Japan, so I became an entrepreneur.
I am currently working on 2 projects. One of them is my own company called "Language Link", which is a company in the language learning market. I plan to create many products that will help language learners on their paths to fluency, the first of which is a free mobile application that will let users conveniently find language exchange partners and practice their conversational skills with them.
The second project I am doing together with 5 friends. We've started an entertainment company here in Japan and plan to establish ourselves in the next few years leading up to the olympics, so that we can make maximum use of all the opportunities that will arise leading up to the olympics in 2020. We are currently working on various partnerships, organising concerts and setting up an artist agency in Japan.

Did you bring family with you?
No, my family is all still in The Netherlands.

How did you find the transition to living in a foreign country?
This time moving to Japan was quite easy, because it was the 2nd time I moved countries and the 3rd time I moved in general. After graduating high school, I decided to attend a university on the other side of the country. No friends went there and although they spoke the same language there, it was almost the same as moving abroad, because I had to start all over. Then after I dropped out of university to pursue a career as a professional poker player in London, I moved countries and started fresh yet again. So Japan was the 3rd time and it came natural to me, because I had already gotten used to it.

Was it easy making friends and meeting people; do you mainly socialise with other expats?
It was pretty easy thanks to a couple of things. I had already made a few friends during my trip to Japan in late 2012. One of those I still hang out with and a second recently moved from Nagoya to Tokyo and I still see every now and then as well. Actually I recently random ran into her in Shibuya(one of the busiest areas in Tokyo)! What are the odds!?! Furthermore, when I was looking for a place to stay during my 2nd trip to Japan I stayed at someone's house for a week through Couchsurfing(a website where travelers can find free accommodation with locals). We clicked really well and he's become one of my closest friends in Tokyo and through him I've met a lot of other awesome people and very close friends. I've also met people through other means such as meetup.com, but mostly through meeting friends of friends my network expanded very very quickly.
I have a few other expat friends and quite a few friends are quite internationally minded(have spent some time abroad and speak English), but I also have a large amount of friends who are very Japanese and don't speak much or any English. It's really a bit of everything. 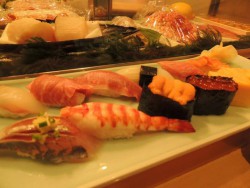 Frank Peelen Sushi
What are the best things to do in the area; anything to recommend to future expats?
Definitely food. It's worth it coming to Japan just for the food. If you understand some Japanese definitely check out http://www.tabelog.com, if you don't ask local friends for recommendations. Also feel free to contact me through my blog to ask me about Japanese food. I'm obsessed with it so I'm more than happy to give you some recommendations! You can also check out my 2nd blog http://tokyofoodjournal.blogspot.jp/ where I occasionally post about good meals I had.
Tokyo is best for a city trip. You can see some old culture too, but if you want to get to know the old Japan I recommend you visit Kyoto instead. However, if you like massive modern cities, shopping, food and/or are interested in what Japan is like today, Tokyo is an amazing place to visit!

What do you enjoy most about living in Japan?
However awesome the food, the public transportation and the city are, by far the best thing are all my friends specifically and the Japanese people in general.

How does the cost of living in Japan compare to home?
Compared to The Netherlands it is very expensive, especially housing. Compared to London however, it is somewhat cheap. Housing in particular is quite a bit cheaper. Eating out in Japan is also in general very cheap compared to other first world countries(and the quality is sublime), but groceries and especially fruit can be really pricey. Certain watermelons are sold for over 100$! 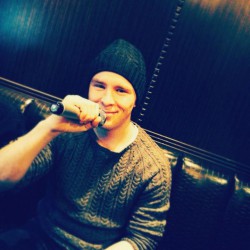 Frank Peelen Karaoke
What negatives, if any, are there to living in Japan?
For most people the language will be a big barrier. You can certainly live and get by in Japan without speaking much or any Japanese, but you'll be missing out on a lot and may not feel as at home as I do. It's also a very hard language to learn and it takes a lot of time and effort. Fortunately enough I started early and had periods where I didn't have to work a lot and really put in some hard effort to improve my Japanese, so I already understand Japanese better than a lot of expats ever will. I do think this will be a barrier for most people though.
The rest really depends on people's personality. Japan fits me perfectly, but it's very different from western countries and will not suit everyone as a place to live. I suggest you visit first before deciding on whether you want to live here.

What has been the hardest aspect to your expat experience so far?
Not much to be honest. It's been smooth sailing for the most part. If I had to name something, possibly the language? I'm doing well now, but I definitely struggled for a while. Possibly my visa? It took quite a while and I even had to leave the country for a month after my tourist visa expired to wait for my investor visa to be approved.

When you finally return home, how do you think you'll cope with repatriation?
n/a 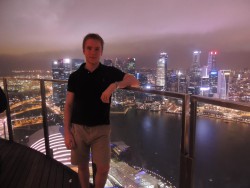 Frank Peelen Singapore
What are your top 5 expat tips for anyone following in your footsteps? Tell us a bit about your own expat blog.
In my blog I blog about my life, which is mostly cool experiences I had in Japan, updates on my business, trips to other countries, gourmet, fitness, learning Japanese, psychology, philosophy and sometimes movies.

How can you be contacted for further advice to future expats coming to your area?
Feel free to leave a comment on my blog, send me a message on twitter @FrankPeelen or contact me through my website http://www.frankpeelen.com/.

Frank is a Dutch expat living in Japan. Blog description: I recently moved countries for a 2nd time in 2 years and started anew yet again as an Entrepreneur in Tokyo, Japan. Read about my Life in Japan, Trips throughout Asia, various Business Ventures, Amazing Food, Fitness, Poker and Movies.