US Expat Living in Costa Rica - Interview with Mark

Want to get involved? Become a Featured Expat and take our interview.
Become a Local Expert and contribute articles.
Get in touch today!
Filed: Interviews,Costa Rica
Mark is a retired newspaper executive who moved to Atenas, Costa Rica in July 2011 to live off social security and a meager savings. Their vacations always tended to be adventurous to Mexico or the Caribbean islands. After extensive online research they decided to look at Panama, Belize and Costa Rica as potential retiremet homes.
He blogged before he came, humorously writing about items of interest to baby boomers. Mark's expat blog is called Baby Boomer Going Like Sixty (see listing here) 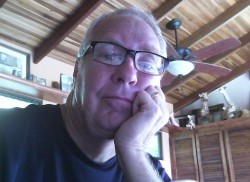 Here's the interview with Mark...

Where are you originally from?
Allen, Michigan

In which country and city are you living now?
Atenas, Costa Rica

How long have you lived in Costa Rica and how long are you planning to stay?
Since July 2011. They plan to stay as long as their health allows it. 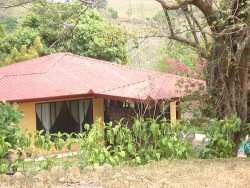 Home: Sedolsoder, Guacimo de Atenas, Costa Rica
Why did you move to Costa Rica and what do you do?
Mark and his wife visited Costa Rica once and bought a house three months later and moved three months after that. They love the "eternal spring" weather of the mountainous Central Valley.

Did you bring family with you?
Mark and his wife brought four dogs.

How did you find the transition to living in a foreign country?
They consider the transition and adventure and a challenge. Before they moved, the couple did a lot of soul-searching on what is really important to their lives. So far, they are adapting well.

Was it easy making friends and meeting people; do you mainly socialise with other expats?
Yes, the Central Valley of Costa Rica, and Atenas specifically have a large expat population. 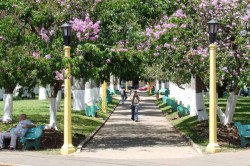 The central park of Atenas, Costa Rica is a social hub for this tight-knit farm community.
What are the best things to do in the area; anything to recommend to future expats?
They are convinced the best thing to do is to stop and enjoy life.

What do you enjoy most about living in Costa Rica?
The small town atmosphere where everybody knows everybody else appeals to Mark and his wife. To spend a day in Atenas and not run across a friend or acquaintance is very rare they say. 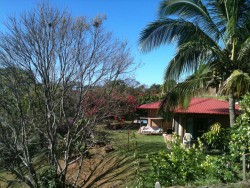 Home: Sedolsoder, Guacimo de Atenas, Costa Rica
What negatives, if any, are there to living in Costa Rica?
Sometimes is frustrating finding "stuff" that is readily available with a huge selection at a low price in the U.S.

When you finally return home, how do you think you'll cope with repatriation?
This truly is an known. On previous return visits to the U.S., Mark and his wife have encountered a culture shock during their short visits. 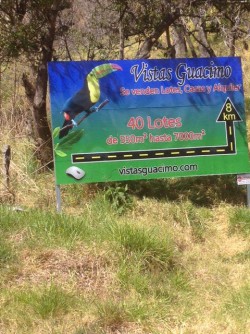 VistasGuacimo.com
What are your top 5 expat tips for anyone following in your footsteps? Tell us a bit about your own expat blog.
GoingLikeSixty.com has been on the web since 1997. Over 3000 humorous posts about being a baby boomer awaits the reader. Since moving to Costa Rica, the blog light-heartedly documents some of the challenges and rewards the couple has encountered.

How can you be contacted for further advice to future expats coming to your area?
Mark can be contacted via his blog.

Atenas, one of the most beautiful places in my country Costa Rica, everyone is welcome for visit or living.. Thank you Mark for such a good article.