Want to get involved? Become a Featured Expat and take our interview.
Become a Local Expert and contribute articles.
Get in touch today!
Filed: Interviews,Thailand
Steve LePoidevin was born into a totally English family in French Quebec and inherited an elegant French name that dates back over 500 years to a small town in France. He believes this is the explanation for his global psyche! Following a math/chemistry teaching career that spanned three countries (Canada, Scotland and China) and almost thirty years, Steve has retired to Chiangmai, Thailand, with his wife, Nancy. His life in education was interrupted by a ten-year stint as a professional studio potter (it's a long story!). He and Nancy are also motorcycle enthusiasts and have criss-crossed Canada and the US several times on their 1500 cc cruiser. When he is not busy with blogging, writing, traveling and photography, you will find Steve building crazy stuff in various virtual worlds or exploring Chiangmai on his 150cc scooter. Steve's expat blog is called Thai Canuck (see listing here)

Posing with a little cat at Tiger Kingdom, outside of Chiangmai.

Here's the interview with Steve...

In which country and city are you living now?
I am now living in Chiangmai, Thailand.

How long have you lived in Thailand and how long are you planning to stay?
My wife and I moved here last summer (2013) after living and working in Wuhan, China for the past six years. We plan on staying here for the foreseeable future. 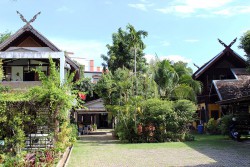 Our current home (the house hidden behind the trees, not the whole complex!).
Why did you move to Thailand and what do you do?
I moved here to retire after researching several potential retirement destinations around the world. The mandatory age of retirement for most foreigners in China is 60, depending on where you live. I managed to eke out a couple of more years before I had to leave my teaching position. I had the choice of trying to find another job somewhere or retiring. I chose the latter! We had visited Chiangmai and other areas of Thailand on several occasions while living in China and really liked what we saw.

Did you bring family with you?
As I stated above, my wife accompanied me. In fact, she was the one that originally encouraged me to accept the teaching position and move to Asia in the middle of a cold, Canadian winter. My older son has been teaching ESL in China for the last four years and recently opened a bar/deli in Changsha. It is easy for us to visit each other. My younger son is a professional musician and is often on the road. Both love the fact that they can visit us in Thailand!

How did you find the transition to living in a foreign country?
We went through most of our trials and tribulations when we first moved to China six years ago. Moving to Thailand was not a big step. It really didn't take us long to adapt to either culture. We both love hot, spicy food, hate rules and over-regulation, and enjoy riding on anything that has two wheels. These three personality traits allowed for an easy transition to this interesting part of the world.

Was it easy making friends and meeting people; do you mainly socialise with other expats?
Up until now, we have only socialized with a few locals and mainly have been doing our own thing. We currently live in a detached house in a local Thai neighbourhood so don't come across many expats on a daily basis. We have met a few expats in passing but that is about it. There is a very active expat club in Chiangmai that meets monthly. Under their umbrella are a host of more specific hobby groups that include everything from computers and board games to hiking and wining and dining. We are going to attend our first expat club meeting later this month and will test the waters! 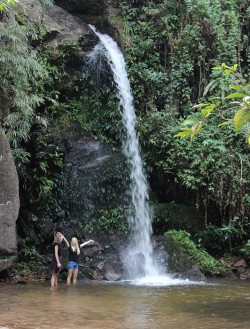 One of many waterfalls in Doi Suthep National Park on the outskirts of Chiangmai.
What are the best things to do in the area; anything to recommend to future expats?
There are so many things to do here, it is difficult to list them. Because it is a university town and cultural centre, there are always gallery shows and music events taking place. The large tourist industry has produced a plethora of outdoor activities in which you can participate, and numerous tourist attractions to visit, but these tend to get expensive quickly. Chiangmai is located in the northern. more rural area of Thailand so there are lots of parks, scenic waterfalls, and hiking trails within a short drive in any direction. We have not been bored yet!

What do you enjoy most about living in Thailand?
We love the friendly people, the wonderful food, the great weather and the fact that we can ride our scooter year-round. In general, the Thais have a laissez-faire attitude that is hard to describe. We enjoy the laid back lifestyle but it frustrates some foreigners. Being able to ride my scooter everywhere and every day is a plus. After driving in Wuhan (pop. 10 million) for six years, I figure I can drive anywhere!

How does the cost of living in Thailand compare to home?
If you try to live and eat like you do at home, it will be the same or more expensive. Thailand is only a cheap place to live if you shop at the markets, eat in the local restaurants and stay away from the bars! Most imported goods are very expensive. We are living on what we consider a relatively small budget, about 50 000 baht per month. We currently live in a detached house but are soon moving to a condo. We cook a lot of meals at home but also eat out a few times a month at both Thai and Western restaurants. We go out to at least one movie per week. If we lived in a smaller house in the city or out in the boonies, which would not be that difficult, we could live on a lot less. However, we enjoy our space and amenities. We also enjoy being in the heart of the city and within walking distance of most places we want to go. 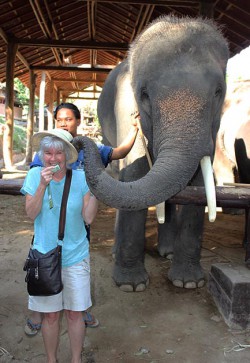 My baby sister befriends an elephant.
What negatives, if any, are there to living in Thailand?
The only negative at this point would be the smoky time of the year. During the months of March and April, the farmers in the countryside burn off their rice fields. This causes the air in and around Chiangmai to become very smoke-filled. I have to say it is nothing compared to the daily pollution we endured in China but some expats actually leave the city during that time of year. During the dry months of spring and summer in the interior of British Columbia , we used to have a similar problem because of the numerous forest fires that were usually burning. So far, we haven't found it to be excessively irritating in Chiangmai, except for a few days.

If you could pick one piece of advice to anyone moving to Thailand, what would it be?
Pack what you think you will need to bring with you and then cut it at least in half! We sold the vast majority of our stuff before leaving Canada and then again when we moved from China. We only shipped a couple of suitcases and half a dozen small boxes, three of which were computers and peripherals. It was still too much! Our books we have read sit on the shelves and the cold weather clothing we brought "just in case we needed it" sits gathering mould. I have worn shorts, t-shirts and sandals since the day I stepped off the plane. Everything else could have been left behind. We did end up vacuum packing a lot of stuff in plastic storage bags recently to prevent mould from forming. I imagine most of it will never be touched again!

What has been the hardest aspect to your expat experience so far?
The only aspect of living in another country that I find frustrating is my inability to carry on a conversation with the locals. I learned survival Chinese and I am learning Thai but it takes a lot of time and effort to be able to speak well enough to communicate effectively. So I continue to speak with a combination of bad Thai, charades and sign language. Fortunately, many people in Chiangmai do have a little English up their sleeve. Unfortunately, this tends to make me procrastinate in learning the language that would enable me to speak with the rest of the population.

When you finally return home, how do you think you'll cope with repatriation?
We really have no intentions of returning home. If we did, I think it would be very difficult dealing with the cost of living, especially if we wanted to continue living in an urban environment. It would be very frustrating to have so little for so much. We have definitely become spoiled by living in Asia for this long. And I won't even mention the Canadian weather! 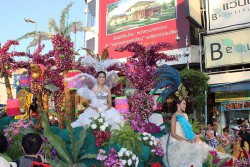 Chiangmai Flower Festival Parade 2014
What are your top 5 expat tips for anyone following in your footsteps? Tell us a bit about your own expat blog.
I started blogging when we first moved to China. My site contains many earlier postings about our experiences and travels around China, as well as many articles on my days as a teacher at Wuhan Maple Leaf International School. Since we moved to Chiangmai last year, I have been writing about life in Thailand as a retiree. Reflections, reviews of local tourist attractions, driving tips, a little foody stuff, trips around the country and lots of photos make up the gist of my blog.

How can you be contacted for further advice to future expats coming to your area?
The best way to contact me is through my blog or email.

Steve is a Canadian expat living in Thailand. Blog description: After spending the last six years teaching math and graphic arts in China, my wife and I have retired to Chiang Mai to continue our love affair with Asia and all its quirks and surprises. This blog will highlight our newest adventures.

Hey Steve! I really enjoyed reading your answers and seeing your photos brings back some memories of when I was in Thailand as a child. Such a vibrant place and culture. Mind you I didn't have the taste for Thai food back then as I do now. I do miss a great Thai meal now I live on a small island in Spain! I'm impressed you've learned some of the language too!