Want to get involved? Become a Featured Expat and take our interview.
Become a Local Expert and contribute articles.
Get in touch today!
Filed: Interviews,Japan
Robin's been on the move all of his life. Moving to Japan is just one of many stops around the planet. His travels and experiences are an important part of his writing. Robin's expat blog is called Tabinin (see listing here) 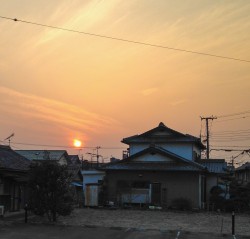 Here's the interview with Robin...

Where are you originally from?
I've moved eighty-three times. I don't know that I'm from anywhere, but I was born in London, UK.

In which country and city are you living now?
Living in quiet, rural Kainan, Japan.

How long have you lived in Japan and how long are you planning to stay?
I've lived in Japan for a year now, but in Kainan for only six months. For the foreseeable future, this is home! 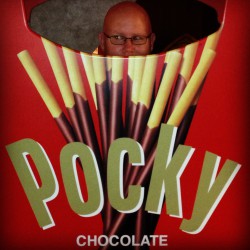 I'm wacky chocolatey.
Why did you move to Japan and what do you do?
I moved to Japan to get into teaching, as well as to do location research for an upcoming novel. I love teaching. I work at two junior high schools and have a great time each week. It's more fulfilling than I hoped.

Did you bring family with you?
Nope. It's just me.

How did you find the transition to living in a foreign country?
I found Japan a very easy transition. This isn't my first time abroad on my own, but Japan has been fantastic. I found making an effort to learn the language makes a big difference in staving off culture shock.

Was it easy making friends and meeting people; do you mainly socialise with other expats?
Working at multiple schools made it easier to meet people. I socialize 50/50 with Japanese and other expats, but it's not by design. 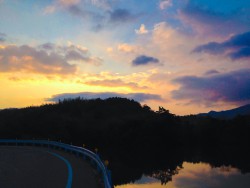 Sunrise on the walk to school.
What are the best things to do in the area; anything to recommend to future expats?
Osaka is an amazing city. The entire Kansai area is fantastic. Kyoto offers old Japan, Kobe is more cool than Amsterdam, and Osaka is a foodie paradise. Travel in Japan is easy and inexpensive, so make an effort to get around.

What do you enjoy most about living in Japan?
I love discovering something new each day. Whether it's learning something from my staff or students, or stumbling across something in the countryside or stores, Japan is a never-ending source of delight.

How does the cost of living in Japan compare to home?
Compared to Seattle, most of the expenses are on par. Rents are pretty reasonable in Kansai, but the cost of food is fairly high. Travel is cheap, hotels are relatively cheap, but restaurants usually aren't. 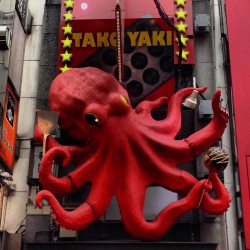 Takoyaki is so good even the octopus likes it.
What negatives, if any, are there to living in Japan?
In a rural city like Kainan, most people are really young, or really married. Opportunities to meet new people are few. It can get a little isolating at times.

If you could pick one piece of advice to anyone moving to Japan, what would it be?
Bring a jumbo bottle of Ibuprofen. Pain medicine in Japan is ludicrously underpowered.

What has been the hardest aspect to your expat experience so far?
Some contracts don't pay you for holiday breaks, so your income can fluctuate wildly. That means discipline and adhering to a budget or eating nothing but rice for three weeks. Always ask about breaks before you sign a contract and see if there's an alternative.

When you finally return home, how do you think you'll cope with repatriation?
I don't think there'll be much to deal with. I've moved abroad and back many times in my life. This won't be much different. 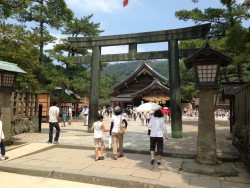 Izumo-Taisha, the second most important shrine in all of Shinto.
What are your top 5 expat tips for anyone following in your footsteps? Tell us a bit about your own expat blog.
Tabinin is my journal about my experiences in Japan, my observations on teaching, and a chance for people to glimpse at the ways Japan differs from their part of the world. It seems to revolve around teaching, cool/wacky discoveries, and observations on life in the Land of the Rising Sun.

How can you be contacted for further advice to future expats coming to your area?
Hit me up on my blog or via Twitter. I'm happy to offer advice to people coming to Kansai.

Robin is an American expat living in Japan. Blog description: A writer's adventures living and teaching in Japan.