Want to get involved? Become a Featured Expat and take our interview.
Become a Local Expert and contribute articles.
Get in touch today!
Filed: Interviews,Netherlands
Caitlyn is a twenty-something Australian living in the Netherlands. Seven years ago she crammed her life into a backpack affectionately called 'the Beast' and hit the road, anxious to see all the world's Olympic sites. Needless to say, she got a bit distracted along the way. Today she's a tour guide in Europe, and blogs about what she loves; travel, sport and food. Caitlyn's expat blog is called Olympic Wanderings (see listing here) 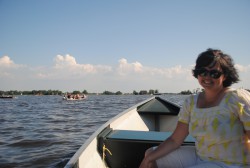 A lazy day sailing around Giethoorn, the Netherlands

Here's the interview with Caitlyn...

Where are you originally from?
Melbourne, Australia.

In which country and city are you living now?
Dordrecht, the Netherlands.

How long have you lived in Netherlands and how long are you planning to stay?
I've just ticked over the three-year mark. Originally I was supposed to stay a year, but I'm still here. I think I'll be here for another year or two, which is enough to qualify for a Dutch passport. 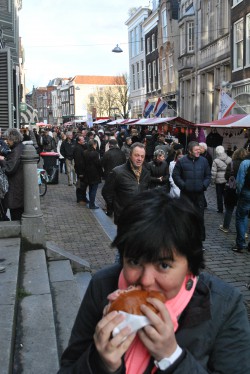 Eating a broodje beenham (baked ham roll) at the Dordrecht Christmas Market
Why did you move to Netherlands and what do you do?
I moved here with my Dutch boyfriend - we met travelling in Japan almost six years ago. We did the long-distance thing for a while, he lived in Melbourne with me, and then we both moved to Dordrecht. My background is in policy advising, but for the past three years I've been working as a tour guide.

Did you bring family with you?
No, just me.

How did you find the transition to living in a foreign country?
It's had some highs and lows. I've been able to do a Masters degree here which was great, but because my work has me out of the country for half of the year, I've found it hard to meet other people. The fact that almost everyone speaks fluent English has also made me pretty lazy in terms of learning Dutch.

Was it easy making friends and meeting people; do you mainly socialise with other expats?
No, it hasn't been. Most of my friends over here don't actually live in the Netherlands - they're colleagues that are spread all over Europe and beyond. I have found a lot of other expats either a bit older than me (parents with small children) or too young (students or long-term travellers) so I feel a bit like I'm in limbo land. 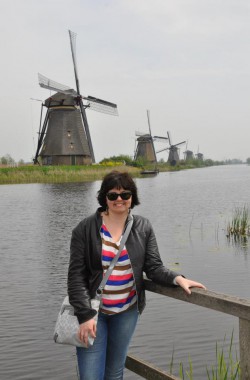 Taking in the World Heritage-listed windmills at Kinderdijk
What are the best things to do in the area; anything to recommend to future expats?
When the weather is good, the Netherlands really comes into its own. We either get on our bikes and cycle to places like Kinderdijk (World Heritage-listed windmills), have a drink on a terrace or watch the boats glide by on the canals and rivers. It's also so nice to be relatively close to other countries, compared to the reality in Australia. It means you can take advantage of weekend trips a lot more.

What do you enjoy most about living in Netherlands?
I really like the open-mindedness and tolerance that the Dutch are known for. I love the history and the beautiful old architecture; hearing all the little quirky stories about the unknown spots in the cities.

How does the cost of living in Netherlands compare to home?
It is slightly cheaper - rent, groceries and bills are less than in Australia, but eating out and taxes tend to be a bit more. 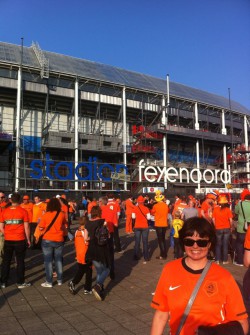 Wearing orange at the football
What negatives, if any, are there to living in Netherlands?
The weather! I can't stand the cold!

If you could pick one piece of advice to anyone moving to Netherlands, what would it be?
Research work opportunities beforehand. I was really lucky to have my tour guiding job lined up before I came here, which was a Godsend. It's relatively tricky to find work where Dutch isn't needed (because the Dutch speak English too!) - however it's a bit easier in Amsterdam.

What has been the hardest aspect to your expat experience so far?
I think it's the 'getting to know' people. I made a few Dutch friends during my Masters but I found it hard to take the next step with them - you would be planning dinners out months ahead! Most of my friends here I know through my boyfriend.

When you finally return home, how do you think you'll cope with repatriation?
I do think that I will struggle quite a bit. I love the mobility we have here - having lots of little trips by plane or train. I also love not needing a car here, and relying on bikes instead. 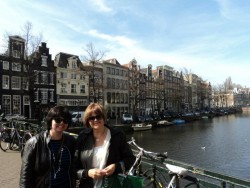 Showing my mum around Amsterdam on a beautiful spring day
What are your top 5 expat tips for anyone following in your footsteps? Tell us a bit about your own expat blog.
I have been writing Olympic Wanderings for seven years now, ever since I set out on my first solo trip to Europe. I'm a sports nut at heart and my aim is to see all of the world's Olympic sites - I've only got four left! These days, I mainly write about expat life and what I see out of my office window - 22 European countries through my work as a tour guide.

How can you be contacted for further advice to future expats coming to your area?
Send me a message either via my blog, or visit my Facebook page (www.facebook.com/olympicwanderings).

Caitlyn is an Australian expat living in Netherlands. Blog description: Follow Caitlyn's journey as an Olympic-loving tour guide in Europe, living as an expat in the Netherlands. Oh and she likes to eat. And talk about it.