Want to get involved? Become a Featured Expat and take our interview.
Become a Local Expert and contribute articles.
Get in touch today!
Filed: Interviews,Germany
Colleen moved to Germany in December 2013 to live with her fiancÃ© who moved there for work a year earlier. She left her job practicing corporate law in Washington, DC, hopeful to return after a year, but more hopeful to make lasting memories with her fiancÃ© as they travel Europe, try new foods, sip lots of wine, and make new friends. Since making the leap, she has been exceedingly happy to have date nights face to face rather than over FaceTime and is enjoying the easy access to the rest of Europe that her new location affords her. Colleen's expat blog is called A leap of faith. A year abroad. (see listing here) 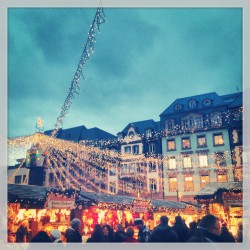 Mainz during the Christmas Market

Here's the interview with Colleen...

Where are you originally from?
I am originally from Elkridge, Maryland - just outside of Baltimore - and spend the last six and half years living in Washington, DC.

In which country and city are you living now?
I am currently living in Mainz, Germany, which is about thirty minutes outside of Frankfurt.

How long have you lived in Germany and how long are you planning to stay?
I moved to Mainz in December 2013, just before New Year's Eve, and hope to stay for two years. 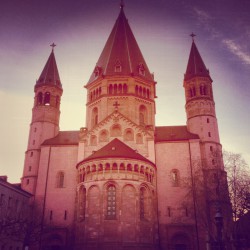 The Mainzer Dom
Why did you move to Germany and what do you do?
My fiancÃ© moved to Mainz in December 2012 for a two to three year assignment for his job. Long distance love is not fun. My heart told me that if I didn't make the leap and move to Mainz, too, I'd always regret it. So in December 2013, I did. I'm currently on sabbatical from my job and spend my time learning German, researching current topics in my field of law for when I return to work, learning new recipes, and planning our next trip.

Did you bring family with you?
No. I moved to join my fiancÃ©, but my parents and sister still live in the U.S.

How did you find the transition to living in a foreign country?
I was really lucky that my fiancÃ© moved to Germany a year ahead of me and made a group of truly amazing friends. Also, I visited about seven times that year and so when I arrived in Mainz, I already had a place to live and a group of welcoming and supportive friends. That being said, there were still some changes to get used to. The small ones like not being able to pop into a CVS on any given corner to pick up an orange juice, some chapstick, and a birthday card hit me hard at first, but I quickly got over it. Not that big of a deal. The weekly markets, local history, and the fact that I was actually living in the same time zone, let alone the same apartment, as my fiancÃ© made it easy to give up the little things. The bigger things, like living far from my parents and friends and favorite restaurants and spin classes took a little longer to sink in. After I lived here for about a month, I realized, "Oh my goodness, I live here. This is not vacation." And then I started to miss my old home. Here's where the supportive group of friends and my fiancÃ© became really important. Also, having a trip back home scheduled in the near future helped a lot too.

Was it easy making friends and meeting people; do you mainly socialise with other expats?
My fiancÃ©'s job is one in which he and his coworkers are required to move a lot. This creates a culture where most people are very welcoming and helpful. They know how it feels to be the new kid, and they want you to stop feeling it as soon as possible. I feel very lucky to have them as friends. Most of them are also Americans, but I've also made some German friends who are equally as welcoming and eager to teach me about their culture. Also, I've met a lot of fellow expats from around the world through my German language class, where we've bonded as we struggle together to learn the local language. 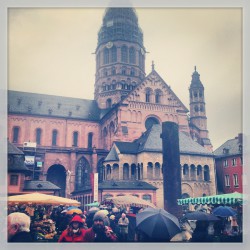 The Tri-Weekly Outdoor Market
What are the best things to do in the area; anything to recommend to future expats?
Mainz is in Riesling country and one of the things I like to do the most is hop around to the surrounding vineyards, taste the local wines, take in the fresh air and beautiful scenery, and learn about the winemakers. Mainz also has some superb restaurants - German and non-German - and an incredible amount of ancient history, as it was formerly a Roman military post and still maintains several sites of Roman ruins.

What do you enjoy most about living in Germany?
Mainz's proximity to the rest of Europe and the ease it affords us for travel is a huge plus, but I'd have to say that my favorite thing about living in Mainz is seeing and learning from the Germans' approach to life. They work hard, but they also celebrate life every chance they get. When it's sunny out, even if it's cold, everyone is outside, walking along the Rhine, sipping a cold beer or a glass of wine, or eating an ice-cream. At every possible occasion, they throw a big festival, most of which involve lots of music, beer, more beer, bratwurts by the ton, chocolates, rides, and endless merriment. Vacation time, sick time, and family time are sacrosanct, here. It's very refreshing to live in a culture where the people take great pride in their work, but also take the time to take care of themselves and enjoy life and each other.

How does the cost of living in Germany compare to home?
The cost of living would be fairly comparable to what I was used to living in Washington, DC, except for the fact that the Euro is currently outpacing the dollar considerably. That being said, there are a lot of easy ways to combat this. Food prices at the farmers' market are very reasonable and, in fact, much better than what I was paying at Whole Foods back home. Also, free activities abound, including hiking, walking around town, biking down the Rhine, and leisurely picnics in one of the many public parks. 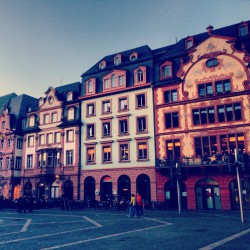 The Marktplatz
What negatives, if any, are there to living in Germany?
Everything is closed on Sundays. This is both a negative and a positive. The negative is that if you forget to grocery shop on Saturday, you're kind of out of luck. The huge positive, is that you have a day of total relaxation to spend with your family and friends and have fun.

If you could pick one piece of advice to anyone moving to Germany, what would it be?
Learn some German. When I first moved here, I didn't speak a word of German. I'd leave the apartment for one errand at a time and the effort it took to overcome my total embarrassment at not being able to communicate properly was exhausting. Almost everyone in Mainz speaks English, but I hated feeling like I was an outsider who needed to rely on the greater language skills of others. Almost three months into my life here, I have picked up enough German to feel much more comfortable outside of my home and much more a part of the community. Being able to have a quick conversation with a shop owner, ask someone at the market what that weird looking vegetable is, or make dinner reservations at a local restaurant, all in the local language, is incredibly satisfying and a great way to feel connected to and a part of your new community. Learning a few phrases and essential vocabulary can really enhance your experience.

What has been the hardest aspect to your expat experience so far?
The hardest aspect of living abroad is feeling like you're missing out on everything back home. I have some truly spectacular friends in the US and, like me, they're doing some really fun stuff. Even though I know that moving here was one of the best decisions I have ever made, I still hate that I'm missing friends' engagement parties, baby showers, my monthly book (wine) club, biking with friends, long brunches for catching up, and dinners with my parents. Living in the moment and embracing my surrounding culture helps me to appreciate the lucky situation that I have, but I still miss friends and family and probably will until I move back.

When you finally return home, how do you think you'll cope with repatriation?
Honestly, Germany is not that different from the United States. I think it will be pretty easy transition. The main thing that will be hard is coming to grips with the fact that I won't be able to hop on a plane and be in Paris in two hours. But my fiancÃ© and I are trying to make the most of our time here, see as much as possible, learn as much as possible, and eat as much as possible, so that we have as few regrets as possible when we move back to the US. 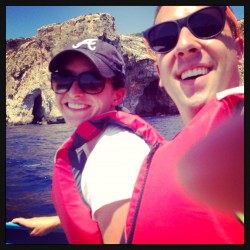 My Fiance and I in Malta!
What are your top 5 expat tips for anyone following in your footsteps? Tell us a bit about your own expat blog.
My blog is called LEAP. It's a series of posts documenting Mainz and the places I've visited while living in Germany, some recipes that I've concocted based on foods I've loved on those trips, and other musings about travel and life abroad.

How can you be contacted for further advice to future expats coming to your area?
I can be contacted through my blog.

Colleen is an American expat living in Germany. Blog description: This is a blog documenting my stories and travels during a one-year sabbatical and beyond.

HI Colleen, I love your blog and have featured it in my curated collection for my company daily the HouseSitMatch Daily - we are a network of housesitters and homeowners who collaborate for affordable travel. Pls let me know if there is a way we could feature in your blog. Here is our url http://www.HouseSitMatch.com Many thanks, Lamia Walker