Want to get involved? Become a Featured Expat and take our interview.
Become a Local Expert and contribute articles.
Get in touch today!
Filed: Interviews,Korea South
Brian and Noelle are an adventurous, travel-hungry Irish couple who have been travelling, working and living in Asia for four years and counting. Brian and Noelle's expat blog is called Wandering On Travel Blog (see listing here) 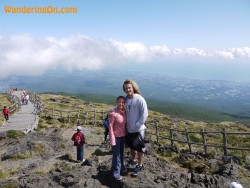 Brian and Noelle at the top of Mount Hallasan on Jeju Island, Korea. Korea's highest mountain.

Here's the interview with Brian and Noelle...

Where are you originally from?
We are both Irish. Brian from Cork and Noelle from Thurles, Co. Tipperary.

In which country and city are you living now?
Right now, we are living in Daejeon, South Korea.

How long have you lived in South Korea and how long are you planning to stay?
We previously lived in Iksan, a small city about an hour south of where are now. We lived there for two and a half years. We left to travel for 18months and then came back to Daejeon to teach English again. We have been in this city since August 2013. Our contract is until August 2014; we'll see what happens! 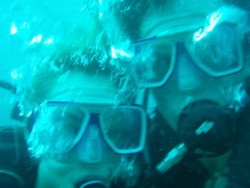 Brian and Noelle scuba diving in Malaysian Borneo.
Why did you move to South Korea and what do you do?
We moved here to teach English. We are both working in public elementary schools and we really enjoy the work. Teaching English affords you a good lifestyle, a good opportunity to save some money and it's a great base for exploring the rest of Asia on your time off.

Did you bring family with you?
We came as a couple, we don't have any kids.

How did you find the transition to living in a foreign country?
On our original move to Korea it was very daunting. Everything was different; the food, the alphabet, the customs, culture, everything. It took us a few weeks to get into the swing of it. However, this time, coming back to Daejeon, we knew what to expect more. We are very familiar with how things are here and so it really was a case of coming back to something familiar.

Was it easy making friends and meeting people; do you mainly socialise with other expats?
As an expat anywhere you have to put yourself out there for sure. We had some friends here coming back too who we have met again since. I'd say it's 50/50 between socialising with Koreans or other expats. Korean people are very friendly, warm and welcoming; the language barrier can be an issue though. 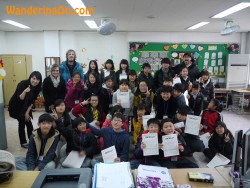 Brian and Noelle with students in Korea.
What are the best things to do in the area; anything to recommend to future expats?
Daejeon is a great city for living in; there are loads of good cafes, great public transport and some nice restaurants to eat at. From a tourists point of view, there's not a lot on offer. There is a really nice national park with loads of hiking trails to the west of the city, that would be my top recommendation for something to do.

What do you enjoy most about living in Korea South?
The best thing about living in Daejeon is that it's a big city without being enormous and also it's location. Daejeon is very central to the rest of the country. Seoul is less than an hour by KTX and the seaside city of Busan is only an hour east by KTX. If you're into skiing or snowboarding (I am!) then Muju ski resort is only an hours drive and is home Korea's longest run, 5km!

How does the cost of living in Korea South compare to home?
Cost of living here is generally about half of what it is in Ireland. With the contract we are on you get a free apartment as part of the package so you have no rent to pay. That saves you a lot of money. If you want to go out and eat at the expensive western chains everyday it would be expensive. Howver, if you were to eat exclusively at Korean restaurants it would be incredibly cheap. We like to mix it up, doing things mostly on a local level and treating oursleves to sushi or an Indian meal now and then. 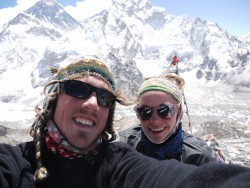 Brian and Noelle at the end of their Everest Base Camp Trek. On the summit of Kalla Pattar (5,550m), with Everest in the background.
What negatives, if any, are there to living in South Korea?
Negatives are what you make of them I guess, if you are positive about the situation a lot of the negatives can be overcome but it takes some work. The language barrier is probably the thing most people have difficulty with. With this in mind you can often feel like you don't have much independence from your employer as they have to help you with a lot of little details of your life which you would much rather do yourself. That can be frustrating; relying heavily on other people.

If you could pick one piece of advice to anyone moving to South Korea, what would it be?
I would say 100% learn the Korean alphabet. It's surprisingly easy to learn. Even if you don't know what you are reading, you can sound out words and it could save you getting on the wrong bus some day!

What has been the hardest aspect to your expat experience so far?
The most difficult thing about living here has been the reliance you have on co-workers and friends to do simple tasks for you due to the language barrier. That lack of independence can be frustrating. You can learn the language but that takes time and dedication.

When you finally return home, how do you think you'll cope with repatriation?
We don't plan on heading home any time soon. We want to continue travelling the world, living in different places, experiencing new clutures and meeting new people as we go. :) 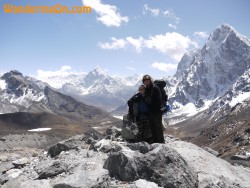 Brian and Noelle at the top of the infamous Cho-La Pass whilst trekking in Nepal.
What are your top 5 expat tips for anyone following in your footsteps? Tell us a bit about your own expat blog.
We started WanderingOn.com during our bug trip which we have just finished. through Nepal, India, Sri Lanka and Sumatra. On the blog you can find travel tips, stories, photos and videos about our lives both on the road and in Korea.

How can you be contacted for further advice to future expats coming to your area?
You can reach us through any number of social media all on our website WanderingOn.com
Our Facebook page: http://www.facebook.com/WanderingOn
We're on Twitter: https://twitter.com/wanderingon_bn
You can find us on Instagram: http://instagram.com/wanderingon
Our Google+ page: https://plus.google.com/+Wanderingon/posts
Subscribe to our YouTube: http://www.youtube.com/user/wanderingonbn