Want to get involved? Become a Featured Expat and take our interview.
Become a Local Expert and contribute articles.
Get in touch today!
Filed: Interviews,France
Using an unusual moniker which resulted from a rather bad Shakespearean pun for the blog's title, Barb the French Bean is the coffee-addicted half of a blogging duo. She resides in France under the guise of being an upstanding citizen but her existence is focused mainly on drinking Loire Valley wines and living among LOTS horses known as the "Neigh-bors." (Her penchant for making bad puns can't be helped.) Barb's expat blog is called Two Beans Or Not Two Beans (see listing here) 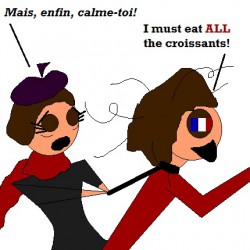 I often have to control my urge to scarf croissants.

Here's the interview with Barb...

Where are you originally from?
I was born in Jersey City, New Jersey but spent most of my youth, adolescence and young adult life growing up in humidity and mosquito-ridden Miami, Florida.

In which country and city are you living now?
I currently find myself in the small city of SablÃ©-sur-Sarthe, France, right between the more well-known haunts of Angers and Le Mans.

How long have you lived in France and how long are you planning to stay?
I've been in France for nearly four years now (two of which were spent in Dijon). With any luck, the French paperwork gods will prove merciful and I'll reside here for the rest of my life. 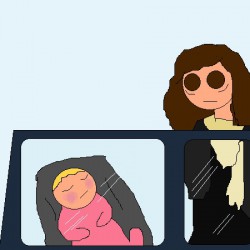 I once saw a baby alone in a car. I have since been informed by my French friends that this is not at all right.
Why did you move to France and what do you do?
As luck would have, a private French high school needed a language teacher who was bilingual in English and Spanish. The stars aligned and I moved to SablÃ© to teach French teenagers el gerundio and to remind them to always add an S in the third person.

Did you bring family with you?
Only in my heart. My mother has visited twice, though.

How did you find the transition to living in a foreign country?
A bit daunting at first, but my knowledge of the language helped to ease matters and connect with others. To this day, the biggest complaint that I've about French life is in regards to the crazy paperwork bureaucracy.

Even then, the French take a long time to warm up to you; they are very guarded bunch. Once they see that you can be trusted, they'll be your friends for life and you WILL find yourself being invited into their homes to enjoy to multiple-course dinner parties that last for several hours. 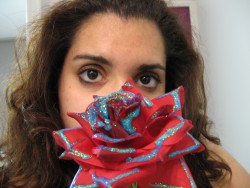 A friend back in Dijon once said I had "Killer's Eyes." I am a rather docile person and therefore give this rose as a peace offering.
What are the best things to do in the area; anything to recommend to future expats?
The horse riding is top-notch in SablÃ©, but if you really want to see the Loire Valley in all of its glory, visit the Plantagenet city in Le Mans and the ChÃ¢teau in Angers.

However, if you plan to move to SablÃ© but like things such as clubbing, nightclubs, bar-hopping, mad parties and socializing with Twenty-Somethings, then I highly suggest you go somewhere else.

What do you enjoy most about living in France?
A supermarket full of wines, cheeses and yogurts can't be beat, and the humane health care system is just grand.

And as a large contrast from life in Miami: getting to experience the proper four seasons rather than the six-month traumas of "hot and humid" and "slightly less hot and humid."

How does the cost of living in France compare to home?
Groceries are more expensive, but my quality of life is considerably much, MUCH better in comparison to American living. 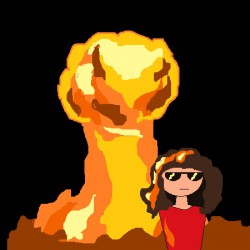 However, if you DO get on my wrong side, I will explode.
What negatives, if any, are there to living in France?
The paperwork and the retroactive income taxes.

If you could pick one piece of advice to anyone moving to France, what would it be?
Be open-minded and learn the language. Go ahead and eat the disturbing-looking food; you'll be surprised how wonderful it is!

What has been the hardest aspect to your expat experience so far?
Being separated from my family and finding decent Cuban cuisine.

When you finally return home, how do you think you'll cope with repatriation?
I go home during the summer months (known as "les grandes vacances"). Even in my short stays visiting and seeing all that is dear and familiar, I find myself missing France after the first week.

"Repatriation" is a bad word in my book. 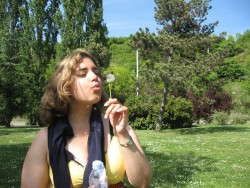 One thing that I love in France is the change in seasons, particularly spring.
What are your top 5 expat tips for anyone following in your footsteps? Tell us a bit about your own expat blog.
Two Beans Or Not Two Beans is really more of a collection of events, recollections and thoughts about my outlook on what goes on with my life. I make the most of manifesting these thoughts by illustrating a little flouncy-haired cartoon version of myself coupled with the occasional snarky remark.

How can you be contacted for further advice to future expats coming to your area?
I can be contacted via the blog's Facebook page.

Barb is an American expat living in France. Blog description: The Mishaps of Two Human Beans. Taking humor to a whole other level.