Want to get involved? Become a Featured Expat and take our interview.
Become a Local Expert and contribute articles.
Get in touch today!
Filed: Interviews,Netherlands
Abby moved to the Netherlands for love. She met her Dutch boyfriend online and decided to chase him across the ocean. She attended college to pursue Dutch studies, as well as art history, and in 2010 she spent a semester abroad in Holland. She fell in love with the art, the language, the country, and of course the man. In 2013 she landed at Schipol Airport with no return ticket.
Now that she is a legal resident of the Netherlands, Abby spends her time fixing up her house with her boyfriend and enjoys blogging about the renovation. In her spare time she enjoys painting, video games, fishing and watching British comedies. Abby's expat blog is called Mom... Dad... I'm Bilingual (see listing here) 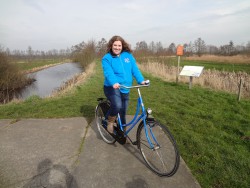 This is me and my sweet ride, the typical Dutch "omafiets" (grandma bike).

Here's the interview with Abby...

Where are you originally from?
A small town in northern Michigan, United States of America

In which country and city are you living now?
An even smaller town in the north of Friesland, the Netherlands.

How long have you lived in Netherlands and how long are you planning to stay?
I arrived on December 1, 2013 and I plan to make this country my permanent home. 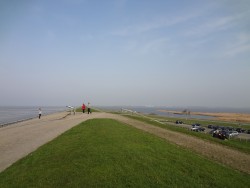 Beautiful day walking along the dijk. Land reclaimed from the sea on the right and the wadden sea on the left.
Why did you move to Netherlands and what do you do?
I moved here to be with my boyfriend. Plus I've always wanted to live in Europe. Right now I'm job hunting and renovating our house.

Did you bring family with you?
Nope.

How did you find the transition to living in a foreign country?
I assumed it would be extremely easy. After all, I know the language, I spent 4 months going to school here and I've visited every year since. Sometimes I'm right, it's a very normal life here, but sometimes things just don't make sense to me and I revert back to being an American.

Was it easy making friends and meeting people; do you mainly socialise with other expats?
I found it difficult to make friends at first. I just don't know where Dutch people around my age are. I mainly socialize with my boyfriend's family.
I knew I needed to meet people outside of his family, so I signed up for a painting class with a group of total strangers.
I met a few friends through online expat communities. They are a fantastic resource. 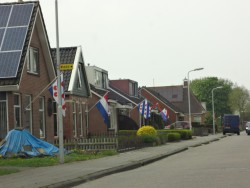 Dutch and Frisian flags are flying in honor of King's Day.
What are the best things to do in the area; anything to recommend to future expats?
Friesland is beautiful and I love spending a nice Saturday afternoon simply exploring, walking around a city and finding a nice cafe for coffee or going for a bike ride. There are certainly enough beautiful bike paths here!

What do you enjoy most about living in Netherlands?
After several years in a long distance relationship it is wonderful to not rely on Skype to talk to my boyfriend. I enjoy being able to do normal couple stuff together the most.
Also I'm enjoying the adventure of figuring out how to live in a new country. Really mundane things become an adventure, like getting a haircut without speaking any English. It's both terrifying and exciting.

How does the cost of living in Netherlands compare to home?
For the most part, prices here are about the same as in America, but you have to take into account the conversion rate, about 1.3 US dollars is 1 euro.
Also sales taxes are included in the prices here, so if an item is marked for 19,95, that's what you pay, no taxes added at the register. 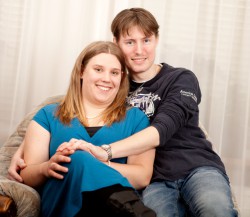 My boyfriend and me.
What negatives, if any, are there to living in Netherlands?
In my opinion, Friesland is a more difficult area to live in for expats than the rest of the Netherlands. Friesland has it's own official language, which has been a challenge for me. Also it is quite far from the Amsterdam, Rotterdam Den Haag area, which is where most expats seem to land because of the international environment.

If you could pick one piece of advice to anyone moving to Netherlands, what would it be?
You can submit your residency application before moving, and that might be a better option if you don't have a job set up already. This way you can keep working and save up money while you wait to hear back from the government. Once you receive your letter of acceptance you have 2 months to pick up your permit, giving you time to quit your job and move. I didn't do it this way, but if I didn't save up money and have the house to work on, I would be terribly bored and poor waiting for my residence permit.

What has been the hardest aspect to your expat experience so far?
Not having a finished house. I wanted to help with the renovation so I moved before our house was even livable and my boyfriends parents offered to let me stay with them. I'm very glad to be here, but sometimes it's hard not having the freedoms that come with living in your own house.

When you finally return home, how do you think you'll cope with repatriation?
Well, since this is my new home, I think I'll cope with visiting my family back in America by eating all of the American foods that I miss. 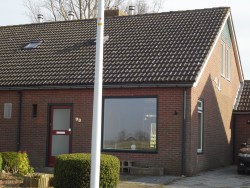 Our house. In the middle of our street. You can check out the interior on my blog.
What are your top 5 expat tips for anyone following in your footsteps? Tell us a bit about your own expat blog.
The idea for my blog started as a way to keep my friends and family updated on my move to the Netherlands all at the same time.
At the moment, most of my posts are about our house renovation. It is very image heavy because I find it easier to tell a story with pictures.
I'm trying to write about my experiences living abroad as they happen, but for right now, the biggest thing happening in my life, is my house.

How can you be contacted for further advice to future expats coming to your area?
You can leave me comments on my blog posts, use the "Contact Me" section, or reach me through twitter. I'd love to hear from you!

Abby is an American expat living in Netherlands. Blog description: My Journey to Become "Een Echte Nederlander" (by Abby)